A few months ago, my wife and I relocated to Rochester—the Western New York (don’t say “upstate!”) Great Lakes metropolis—by way of Los Angeles and New York City (the latter of which I spent nearly 20 years living in, regularly asserting I’d never leave). But my climate doomism and urge to settle down in a spot with relatively promising long-term environmental projections sent me on a long-winded, oftentimes topsy-turvy search for a safer solution.

After exploring Vermont as an option (the constantly expanding dairy-free options offered by Burlington-based Ben & Jerry’s might have had something to do with it) but repeatedly finding little in our price range, our sights shifted to the tippy-top of New York State. The TripTik for our journey became the handy New York Times climate map; it offers long-term projections of heavy rainfall for this area, which is about as good as you can get in the United States (other locations are projected to battle with more and more raging wildfires, tornadoes, catastrophic floods, and devastating droughts).

Even though I’d resided in New York for most of my adult life, Rochester hadn’t really been on my radar. As a big city-dwelling twenty- and thirty-something, all I thought when Rochester was mentioned (which it rarely was) was, “That’s far away, right?” Now, as a forty-something with a healthy dose of existential angst, the question begs: far from what, exactly? 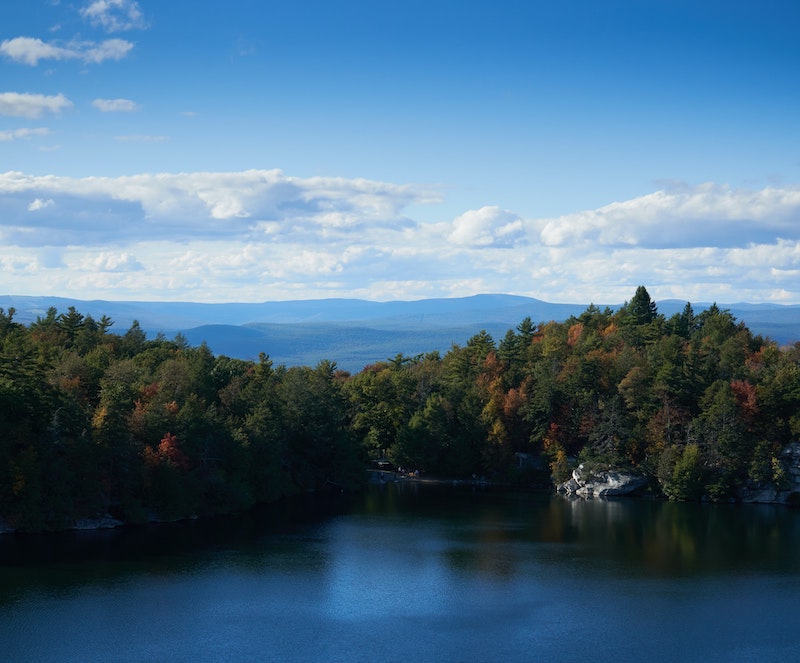 Ever since COVID started and workplaces became more and more remote-friendly, Americans have begun to decentralize—leaving big cities in favor of smaller ones with perhaps more space and affordability. I’m no exception.

In March of 2020, my wife and I—along with our three little old dogs and annoyed cat—all resided in a one-bedroom in West Hollywood, where we paid top dollar to live in the heart of the gayborhood. When the pandemic forced a national shut down, all of the perks of our area were shut down, too—and even though I had been working from home for years, suddenly, my wife was sharing that space alongside me. Who needs a closet when it can be converted into a tiny office? Who needs a dining table when it could be the second office? And who needs a regular old side table when you can sneak a litter box beneath it?

We needed a change (and we needed to change the litter). Plus, the urban density of our neighborhood, combined with too many communal spaces, was even more proof that this was no longer the place for us. So we rented an RV (which I lovingly referred to as our “RVegan”), piled all the animals in there (the cat more annoyed than ever, but also a total trooper), and headed east. 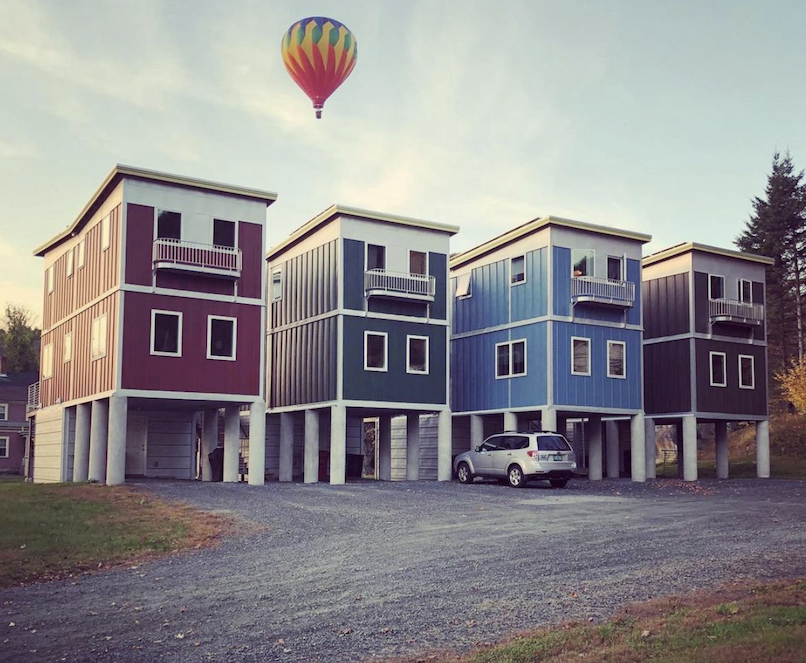 Once there, we rented an in-between place in basically the middle of nowhere (the northern tip of the Catskills, in case you’ve got your map out) and spent all of our down-time figuring out where we could move that would make us feel safer during a pandemic, safer in the long run in terms of the climate catastrophe, and safer as a queer couple (pockets of our cross-country trip reminded us that we’re not always welcomed).

We’d explored building a house from scratch (way too expensive, so I’m pretty sure that conversation lasted about 30 seconds and culminated with our buying a lottery ticket); getting a pre-fab eco-optimized home, such as the ones offered by Vermont-based Vermod (but the land in Vermont was too expensive for us if it was anywhere near a walkable city); and moving into an already-built net-zero community (such as Ithaca’s iconic EcoVillage—but, as vegans, we were not at all interested in our maintenance fees subsidizing their egg-laying hen program, since it was against our ethics). Getting an apartment (even a net-zero one) was also off the table because we found it very difficult to navigate around communal spaces during a pandemic (and let’s just say we don’t think Covid is the last pandemic we’ll see—womp, womp). 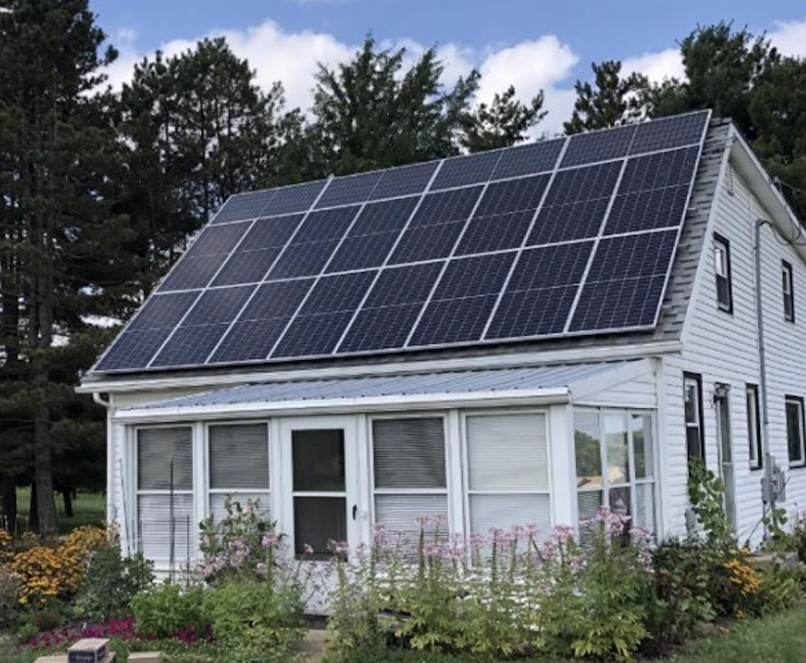 By process of elimination, we were starting to feel that the easiest way for us to have a net-zero home—that is, a home that generates the same amount of clean, renewable energy it requires—was to retrofit an old house to meet our needs.

The homes in Rochester were priced affordably (comparatively to anywhere we looked, anyway) and the energy efficiency company we found, ACES Energy, was immediately helpful in vetting a location with enough clearance for their geothermal drills and good rooflines for solar. With ACES poised to help us to make our home green, we took the plunge and bought a 100-year-old small house in a quaint area that is within walking distance to everything I care about: gay bars and vegan restaurants. No expensive West Hollywood rent required.

Since building our nest last summer—and with the help of financing and some federal as well as statewide incentives—here are some of the changes we’ve made on our quest to transform our house into one that is net-zero:

This harnesses the constant temperature of about 55 degrees Fahrenheit starting about 10 feet below the surface of our yard. In the winter, we extract heat (it’s currently 8 degrees outside and 72 in our living room) and in summer, we look forward to cooling off by dumping heat into the ground. Because this is renewable energy, it reduces our energy bill significantly (it just takes a bit of electricity to blow air through the system).

Solar panels also reduce our dependence on fossil fuels. There is a great cost to the planet when we consider the ongoing dump of CO2 and pollutants in the air. Capturing the sun’s clean energy is an efficient way to bypass the destruction of dirty fossil fuels.

Said to be the backbone of efficient energy systems, the magic here lies in providing a tight envelope to your home. The right type of insulation can also improve air quality within the home by reducing infiltrants and allergens.

Triple-pane windows, much like insulation, are a necessary factor for sealing your home. Before they were replaced, the 100-year-old windows kept just 25 percent of the heat in our home; the new triple-pane windows now keep in 98 percent. They’re also resistant to condensation and will generally pay for themselves in the long run.

Eco-friendly heat pump water heaters reduce your home’s emissions, and according to the Sierra Club, will have a much-needed impact on lowering greenhouse gas emissions in each of the 50 states over the next decade.

A heat pump clothes dryer removes moisture by heating the air—then filtering and cooling it. While it’s condensing, that water collects into a tank, eliminating the need for a vent to the outside—one less place for heat to escape.

Much like a new vegan who slowly replaces their leather shoes with vegan versions as they wear out, we’ve taken the tact to buy or replace appliances with high-efficiency electric ones as we go. The first order of business, since we moved in over the summer, was a grill; how else would we perfectly char our Beyond burgers to complete our American summer dinners? My wife insisted that an electric grill would be the ticket, and it was. Next came the electric mower for the part of the lawn that wasn’t dug up when the geothermal wells were drilled. Most recently, we got a snowblower (this is Rochester, after all). All are corded electric because my wife is very cheap—and because skipping the batteries helps to avoid the environmental cost of lithium mining, which we can’t avoid for the next phase of our journey: an electric car. 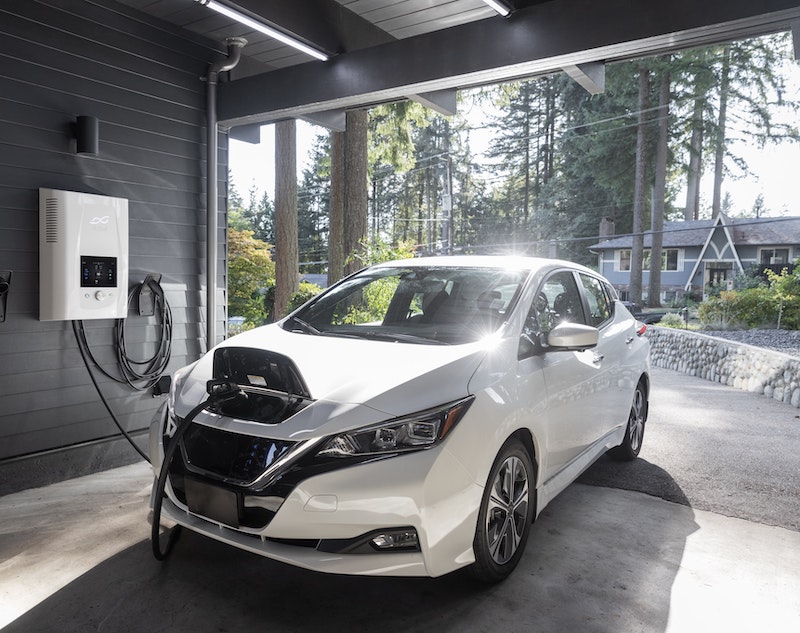 Knowing that an electric car would be happening down the line, when we had the holes dug for our geothermal, we also had an electric panel installed in our freestanding garage. That way, when we are ready and able to get that car, we can easily install a charger. My wife and I are a one-car household, though we opt to walk or ride our bikes whenever possible.

Collectively, we’ve been vegan for 46 years—me for 18 and my wife for 28. Though both of our primary reasons for ceasing our consumption of animal products was because we are horrified by the ways animals are treated—not to mention the many disenfranchised workers who are exploited by the dangerous and inhumane animal agriculture industries—a close second is that we want to do all we can to lessen our carbon footprint. And though we understand that we are in a privileged place to be able to make these adjustments (and to buy a home in the first place), it is our goal to do our part to ensure these planet-friendly energy optimizations are not only scalable, but are available for free to everyone.

When it comes to the ravages of climate change, there is a clear disconnect between the mindset of those who want to do our part, and our actual behavior. Much of this is due to gross inequities within the capitalistic structure our society was built upon.

But just like veganism, it is not to anyone’s benefit to make perfect the enemy of the good. So even if the steps we’ve taken to lower our footprint are not available, the question then becomes: what is?

For more about eco-friendly living, read:
9 Ways to Cut Plastic from Your Life and Help Animals
3 Easy Tips On Getting Started with Recycling and Composting
20 Vegan Sustainable Living Instagrammers to Follow