Cookie dough is not a food you grow out of. While synonymous with slumber parties and chopping off thick slices from the roll of refrigerated Pillsbury sugar cookies, adults delight in cookie dough, too.

These days, entrepreneurs have capitalized on this craving by creating ready-to-eat doughs—refrigerated confections that encourage devouring straight from the jar in lieu of baking. Often at a higher price point than the conventional brands for place-and-bake cookies, these eggless, flour-treated doughs are marketed toward fully grown kids at heart. Granted, most of these are still sugar-laden, and many are not vegan. That’s why DEUX founder Sabeena Ladha crafted a new product to satisfy the taste of childhood nostalgia with the sensibility of healthy eating.

Founded during the height of the global pandemic, DEUX now boasts 19 flavors of spoonable, swoon-able vegan cookie dough, all made without gluten or refined sugar. In between indulgent bites of Cinnamon Roll and Brownie Batter, we asked Ladha how she came to found DEUX, the challenges she faced, and what’s to come.

We’ve all experienced that sickening gut feeling as a child (or very likely as an adult) when we’ve had a bit too much sugar in the form of raw dough. Putting food poisoning aside, more than a spoonful or two of traditional cookie dough made with wheat flour, cane sugar, and (vegan) butter isn’t the healthiest option.

For reference, a popular vegan cookie dough brand contains 2.5 grams of total fat and four grams of sugar for a 14-gram serving, which is less than a tablespoon. However, a medium cookie scoop contains two tablespoons, bringing the fat content to just over 5 grams and the sugar content to over 8 grams.

These numbers aren’t blasphemously unhealthy, but we also have to consider the lack of nutrients this food provides. The average cookie dough (vegan or otherwise) provides a negligent amount of protein, fiber, vitamins, or minerals. Dietitians refer to these kinds of foods—foods that provide calories, fat, and sugar without other nutritional benefits—as empty calories or nutrient-poor. 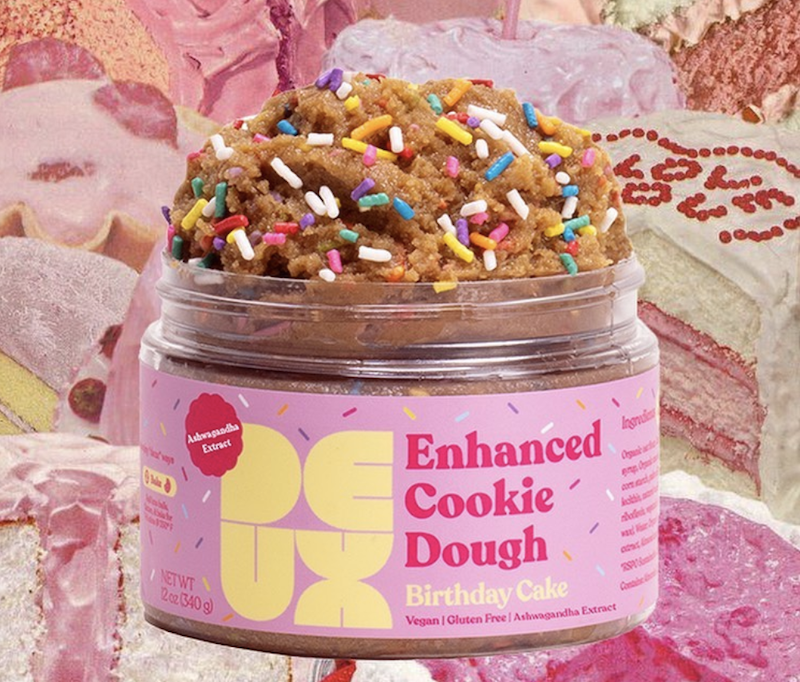 And yet, there’s something so irresistible about cookie dough that justifies the risks, not only in regard to nutrition but also the potential food poisoning. Vegans don’t have to worry about the raw egg situation, but untreated flour is also cause for concern. The CDC cites raw flour as a potential risk for E. coli, as harmful bacteria can infect the grain during the harvest or in the factory where it is refined. Only heat can kill this bacteria, which is a tool ready-to-eat dough brands use to ensure their products are safe.

What makes DEUX different from the average cookie dough? In addition to enforcing food safety measures to avoid any contamination from raw ingredients, the brand also omits gluten and refined cane sugar while boosting its nutritional content. The classic chocolate chip flavor of DEUX contains two grams of protein, two grams of fiber, 6 percent iron, and 15 percent of the recommended daily zinc allowance for each 1.5-tablespoon serving.

In addition, each flavor has a unique blend of functional ingredients to offer a health boost (or at the very least, a placebo effect). For example, the chocolate chip version contains zinc and elderberry extract to support immune function. Will a scoop or two stave off the winter cold? Probably not, but it will very likely defend against the guilt trap so often associated with a little indulgence.

Truly, this depends on the recipe. All of DEUX’s doughs are vegan, but brands that came before it can’t make the same claim. The culprit ingredients are typically butter and whey, a protein found in dairy.

From the start, Ladha knew she wanted to create a crave-worthy product that could be enjoyed by everyone, regardless of dietary restrictions or preferences. She teamed up with a friend who worked as a plant-based baker and gave her simple instructions. “Can we make this product vegan, gluten-free, good for you, edible raw and bakeable, and taste insanely delicious as if it were bad-for-you?” Her friend didn’t disappoint.

DEUX is Ladha’s first go at running her own business, but she was well primed to take on the task. Her resumé includes Marketing Analyst at PepsiCo, Associate Brand Manager at Diamond Foods, and Head of Venture Studio at M13, along with serving as a marketing consultant prior to launching DEUX in 2020. 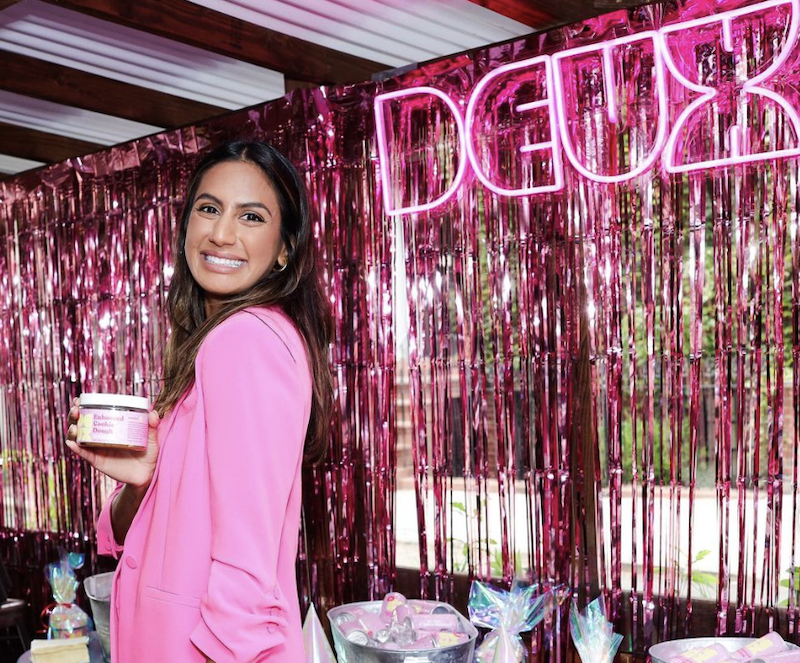 “I actually learned a lot of what I practice today at DEUX from PepsiCo. You get a 101 on the basics—how to manage a P&L (profit and losses), how to run a big brand campaign with a celebrity, and how to deeply understand your consumer,” Ladha explains.

Ladha’s interest in health and wellness was piqued while at PepsiCo back in 2012. She got certified in pilates and started to encourage her family to make healthier lifestyle choices. This was coming from a woman who admits to having “an insatiable sweet tooth and very little patience. Whether it was making cookies, brownies, cakes, whatever with my mom and sisters, I was obsessed with licking the whisk, eating the batter, or having spoonfuls of cookie dough.”

While most of us were making loaves upon loaves of sourdough and stress-baking in 2020, Ladha was building a business. DEUX debuted with look-at-me energy, supported by attention-grabbing marketing and an unapologetically hot pink color scheme. Typically, brands that seem to come out of nowhere are actually in the works for years. DEUX hit the ground at a sprint and hasn’t stopped.

The power of pink

We asked Ladha to comment on how she built her brand so quickly, and she replied, “Blood, sweat, and a lot of tears!” She also credits her background in building brands and her all-star team. “From [DEUX employees] Patrick and Camryn doing the most insane marketing stunts and storytelling, to Kristina who is one of the best operations leaders and problem-solvers I have ever worked with, the team is killer,” Ladha says. 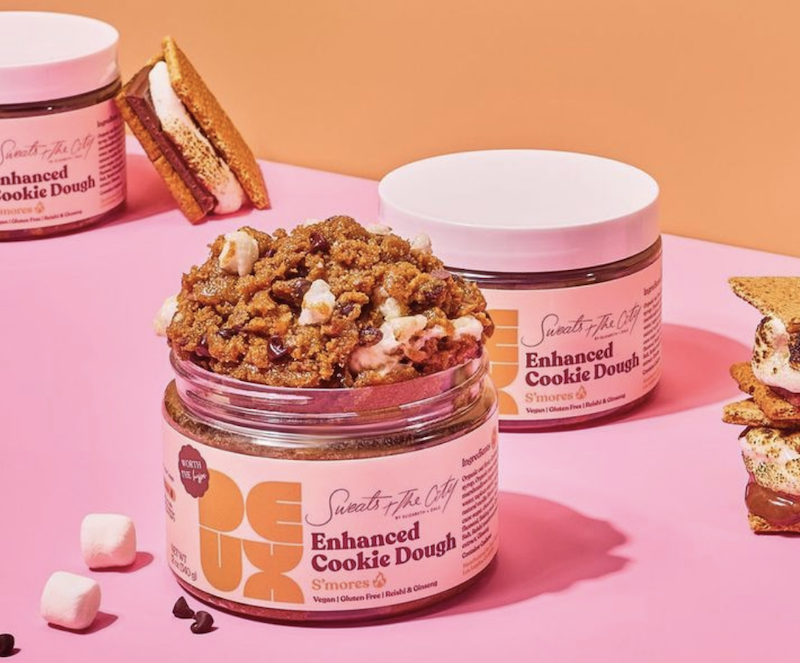 While the public-facing side of DEUX is fun-loving, humorous, and just the right amount of snarky, Ladha has had her share of criticism, and it’s not related to the quality of her cookie dough.

She appeared on Shark Tank in 2021, dressed for battle in a hot pink blazer and matching shorts set, a set she now refers to as “the pink suit heard ‘round the world.” Shark Robert Herjavec offered her $300,000 for 15 percent of the company but ultimately rejected Ladha’s compromise of $300,000 for 10 percent and 5 percent of advisory shares. However, Ladha’s outfit choice received more backlash on the internet than her brand received from the Sharks. Ladha was criticized for dressing “inappropriately” along with a slew of more offensive comments which she details in a TikTok video.

Undeterred, the color pink is still integral to DEUX and Ladha’s sense of self as a businesswoman. “It now stands for empowerment. It stands for being able to own your femininity and strength all at once. I am still obsessed with it,” she explains.

In fact, pink is now a flavor of DEUX—and a celebrity-backed one at that. The limited-edition Pink Frosting flavor is a collaboration between DEUX and Lauryn Evarts of The Skinny Confidential. Ladha cites Evarts as “an icon. She’s a podcaster, OG influencer, and beauty guru.”

The flavor is enhanced with dragonfruit and pomegranate powders to reduce puffiness and signs of aging, counterbalanced with a sense of nostalgia to remind you of “childhood sleepovers, pillow fights, and Easy-Bake Ovens.”

Other celebrities, including Kristin Cavallari, Karlie Kloss, and Paris Hilton are also known to be fans of DEUX—pink suit and all—according to Ladha.

Some flavors come and go, but the DEUX website is consistently stocked with a dizzying array of options. To date, Ladha and her team have dreamed up 19 vegan versions of this better-for-you cookie dough, all within the company’s two-year lifespan. 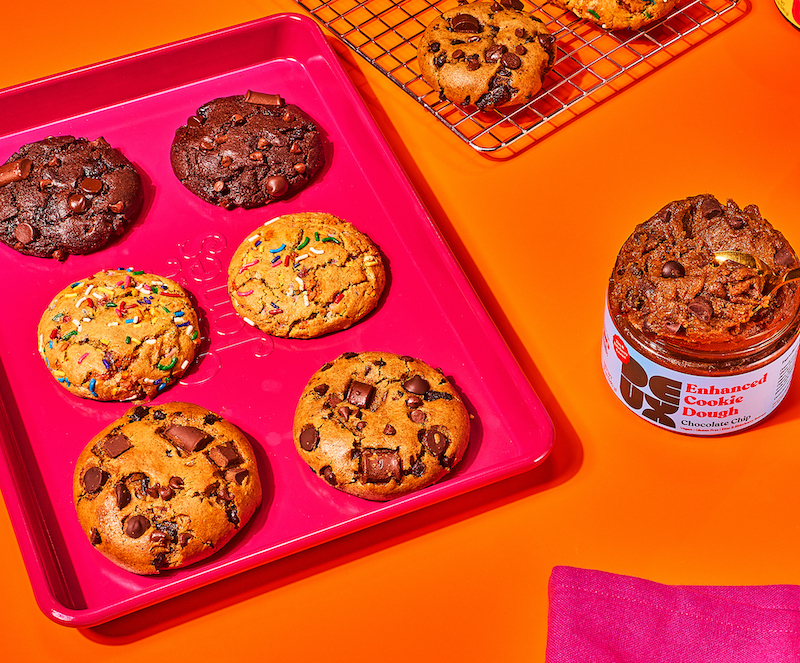 “Consumers really have short attention spans nowadays!” Ladha explains. “As well, our flavor drops keep people coming back for more. Some of my earliest consumer insights work was around millennials and the variety they crave (particularly in food flavors). Younger consumers are adventurous and want those little joys of trying something new on the day-to-day,” she says.

Our personal favorite flavor changes on the daily, but we had to know what Ladha keeps on hand. She told us her top three include the new Pink Frosting, Cinnamon Roll, and the original Brownie Batter. The latter “will always be my number one,” Ladha says.

Once you select your flavor, there’s one more decision you need to make: to enjoy it raw or bake it. Initially, we were happy to dig this deliciousness right out of the jar, but a few pro tips from Ladha have convinced us to resist instant gratification for just a few minutes to try these cooking suggestions.

“[Use your] air fryer!” Ladha recommends. “It’s crispy on the outside and warm and gooey on the inside. I also have been making mini pizookie skillets (cast iron cookies with ice cream on top). They’re so comforting and nostalgic as it gets colder out!”

For more on vegan entrepreneurs, read: