Are you Team Pancake or Team Waffle? Both of these staple breakfast items have their merits, but there’s no denying the textural variety and sweet-meets-savory versatility of a waffle. By its very design, there’s just more going on with waffles than pancakes. Thanks to the crispy square-shaped indentations, waffles are the perfect vessels for maple syrup, and a pat of vegan butter nestles into those squares just so perfectly. And let’s not forget the savory side of waffles—there are few food combinations more indulgent and pleasurable than the iconic chicken and waffles. Let this article be a reason to finally open that waffle maker you received as a wedding gift, or if you’re gadgetless, try out the store options below. Here are seven vegan waffle recipes and six stellar store-bought options to celebrate Team Waffle.

A waffle is a humble food made from a very simple batter traditionally made from flour and water or milk, eggs, oil, sugar, baking powder or baking soda, and a pinch of salt. The eggs provide structure and leavening when cooked, and the milk helps to turn a rather dry mixture into a liquid batter that can be easily poured into every nook and cranny of your waffle iron. Naturally, this classic recipe is off-limits to those who abstain from animal products, but the same delicious scientific reaction can occur by making the right vegan swaps. In the recipes below, dairy milk is easily replaced with non-dairy milk, and eggs are swapped out using a few different techniques (see our guide to egg replacer). 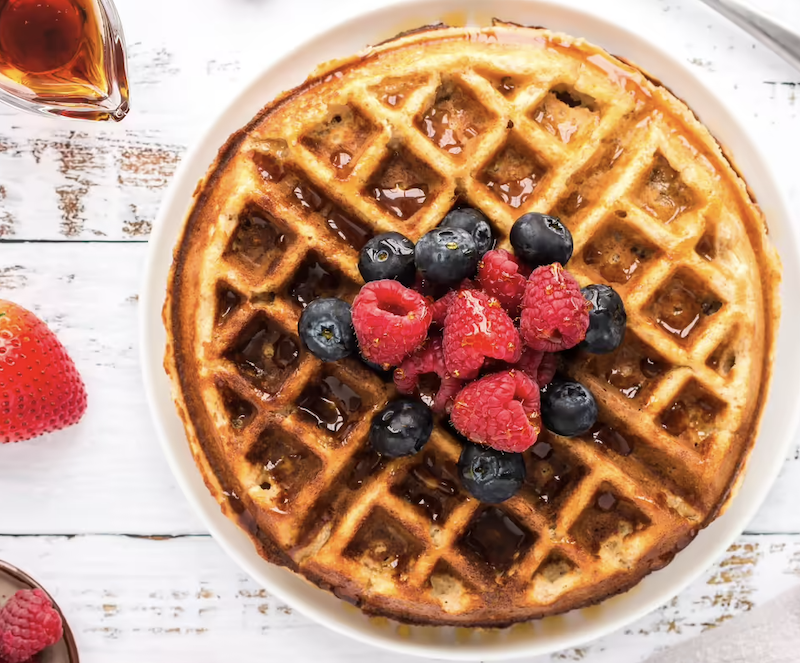 Gone are the days when gluten-free is synonymous with grainy. These waffles are perfectly fluffy without a touch of grit. Made with dairy-free yogurt, mashed banana, and almond and oat flour, the recipe also happens to be naturally refined sugar-free. Go ahead, stack ‘em up high!
Find out more 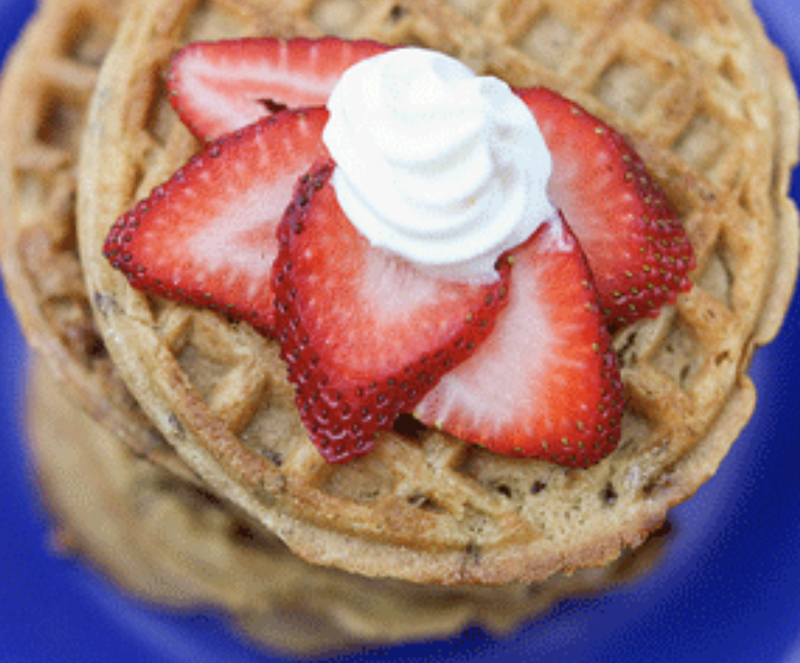 Typically, we’d never eat a waffle without some type of topping, but these spicy chocolate-enriched waffles are the exception. The secret is swirling homemade Mexican hot chocolate sauce into the batter. Of course, a dollop of vegan whipped cream or an extra drizzle of chocolate sauce doesn’t hurt.
Find out more 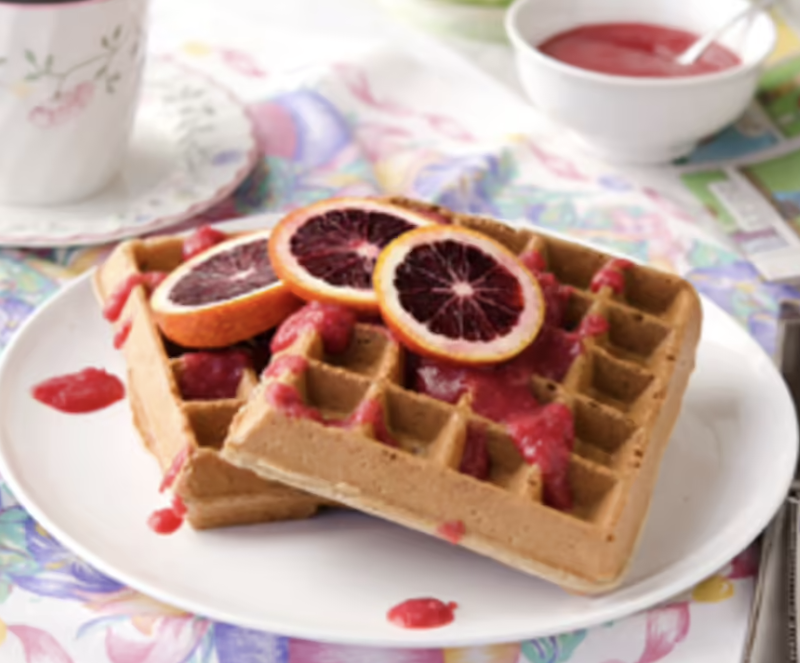 If you own a Belgian-style waffle maker, now is the time to use it. This recipe will work in any kind of waffler, but the deeper the crevices, the more blood orange sauce these waffles can hold! Lightly spiced with cinnamon and nutmeg, this is the recipe to make when you want to impress the brunch crowd.
Find out more 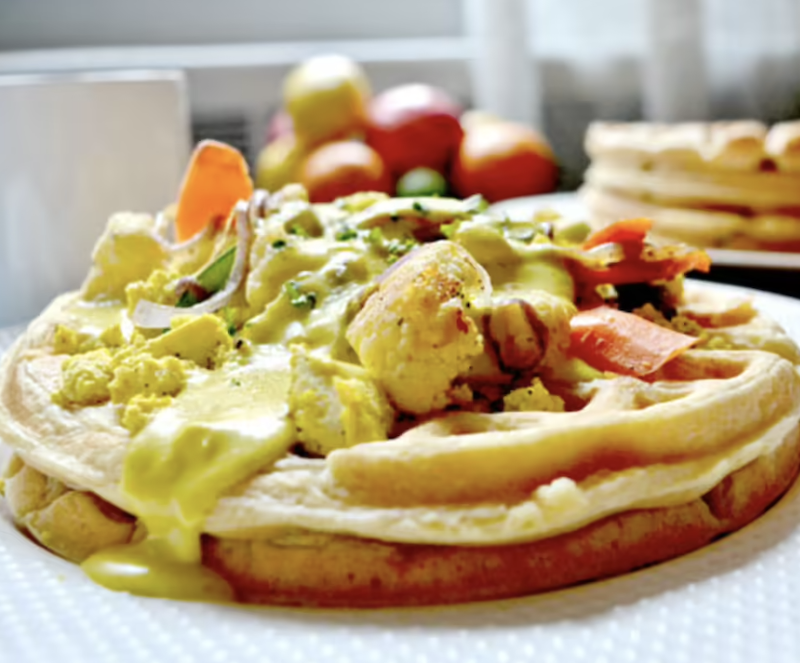 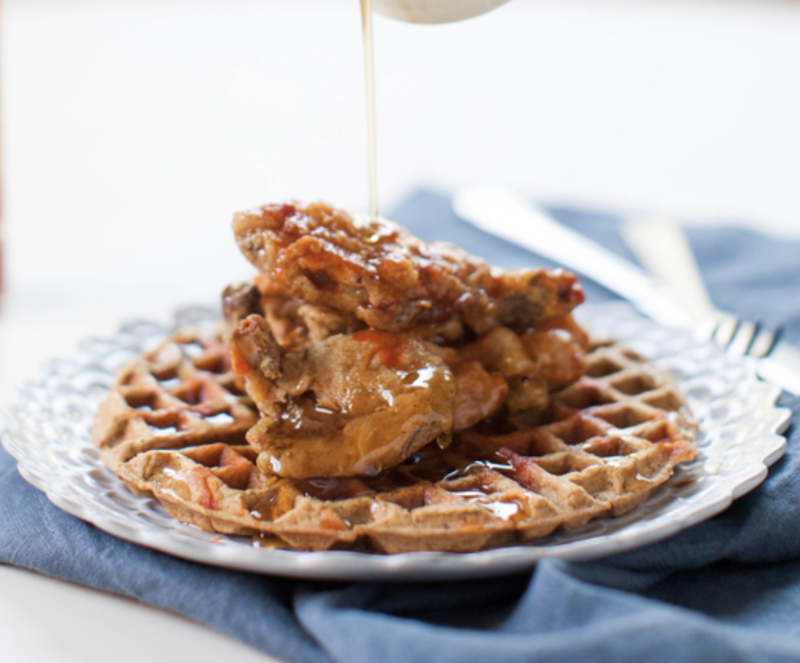 Consider this the gourmet path to vegan chicken and waffles. You could purchase a pack of frozen vegan waffles and pair it with your favorite frozen vegan chicken tenders, or you could make your own with Sweet Potato Soul’s satisfying recipe. The chicken is crafted with fried, meaty oyster mushrooms and served over the top of a hearty whole wheat thin and crispy waffle. Abide by the author’s note and drizzle liberally with maple syrup and a touch of hot sauce.
Find out more 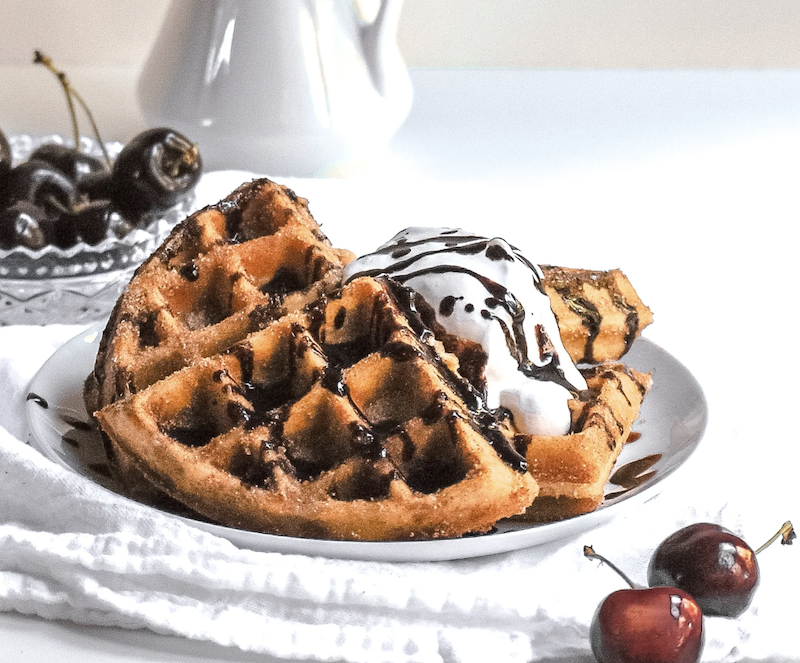 These cinnamon sugar-coated waffles fall firmly into the “dessert waffle” category. Unlike their inspiration, there is no frying involved in making churro waffles at home. Truly, the leap between a regular waffle and a churro waffle only requires one extra (and relatively speedy) step. While delicious when piping hot and straight from the iron, these waffles reach a new dimension when served with a scoop of vegan ice cream and chocolate sauce.
Find out more 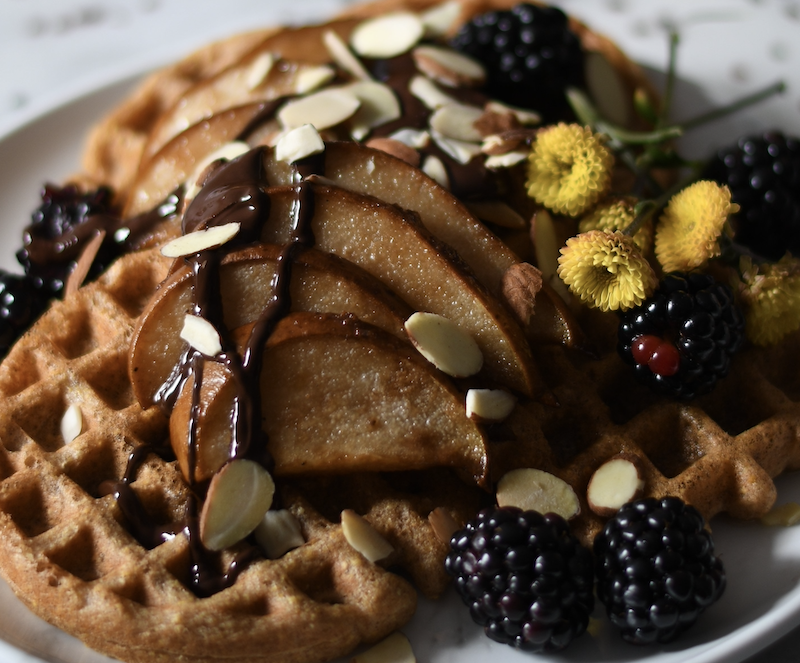 On their own without mix-ins or toppings, waffle flavor is underwhelmingly one-note. Zhuzh up any basic batter by infusing it with fresh ginger and caramel-y notes of coconut sugar. Topped off with sticky-sweet roasted pears and crunchy slivered almonds, and you may never go back to plain waffles again.
Find out more

One could argue that waffle and pancake mix is a form of store-bought waffles. However, we are thinking about everyone out there who doesn’t own a waffle maker. For this reason, we are specifically focusing on frozen, ready-to-eat waffles. For a list of stellar waffle mixes, check out our 15 vegan breakfast staples. 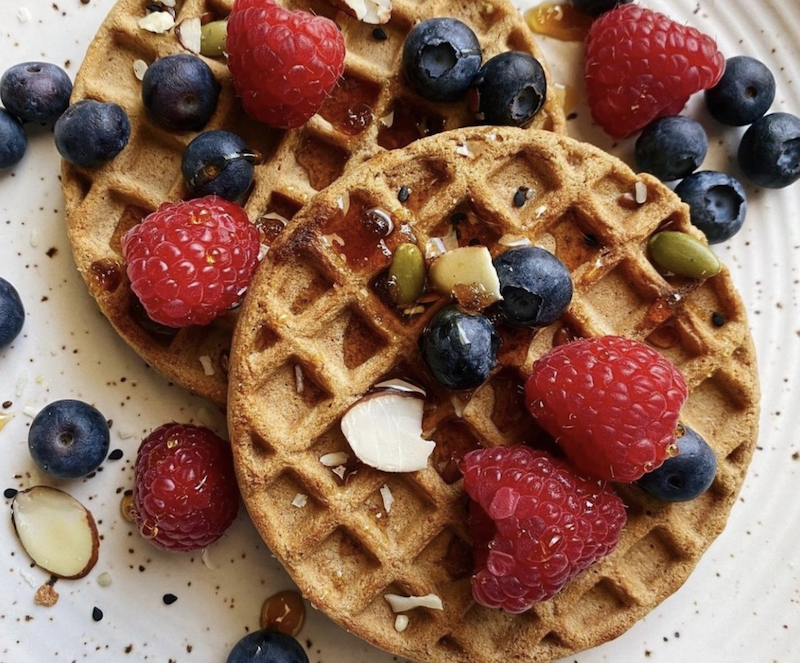 Introducing the “snacking waffle.” Van’s line of vegan-friendly frozen waffles err toward the healthier side—many are gluten-free and packed with whole grains, making them the ideal waffle to slather with peanut butter to get through the mid-afternoon slump. Plant-based varieties include Gluten-Free Blueberry, Apple Cinnamon, Original, and Ancient Grains; Protein Original Waffles; and Multigrain Waffles. Thin, round, and crispy, think of Van’s waffles as a slightly more wholesome equivalent to the classic Eggo.
Find out more

Kellogg’s beloved Eggo brand has partnered with Morningstar’s Incogmeato line to launch frozen vegan Chik’n & Waffles. The box comes complete with two plant-based frozen sandwiches made with a vegan chicken patty and Eggo Liège-Style waffles. No, you can’t pop it in the toaster, but the novelty is worth bringing out the air fryer (the recommended heating method).
Find out more 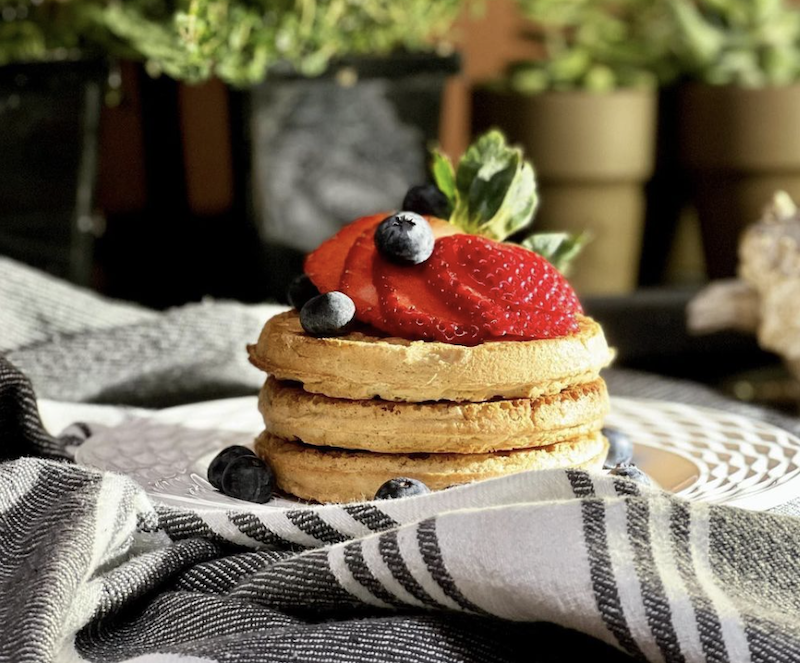 From toaster pastries to instant oatmeal to frozen waffles, this vegan-friendly brand has most breakfast basics covered. Whether you’re grain-free, gluten-free, or simply a vegan looking for a light and not-too-sweet waffle, Nature’s Path provides. The Dark Chocolate Chip, Homestyle, and FlaxPlus varieties have been around for a while, but we’re most recently into the new kid line featuring endangered animals. A percentage of sales from the Envirokidz line goes toward protecting endangered species like polar bears and penguins. Kids and adults alike will be smitten with the beet-dyed Polar Berry Blueberry and cinnamon-spiked Penguin Party waffles.
Find out more 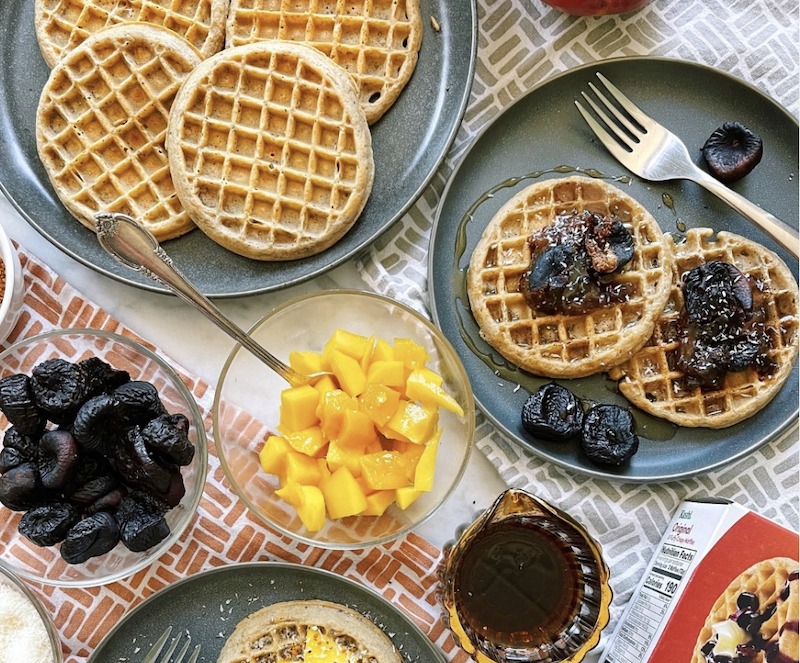 The makers of your mom’s favorite cereal didn’t stop with diet-friendly flakes and clusters—Kashi produces an extensive line of frozen waffles, the majority of which are vegan. The Protein Waffles contain egg and dairy, but the original line and gluten-free range are completely animal-free. Choose from Blueberry, 7-Grain, Gluten-Free Cinnamon, and Gluten-Free Original. These round waffles are a bit thicker than your typical Eggo, making them satisfyingly fluffy on the inside. Let the maple syrup flow freely.
Find out more 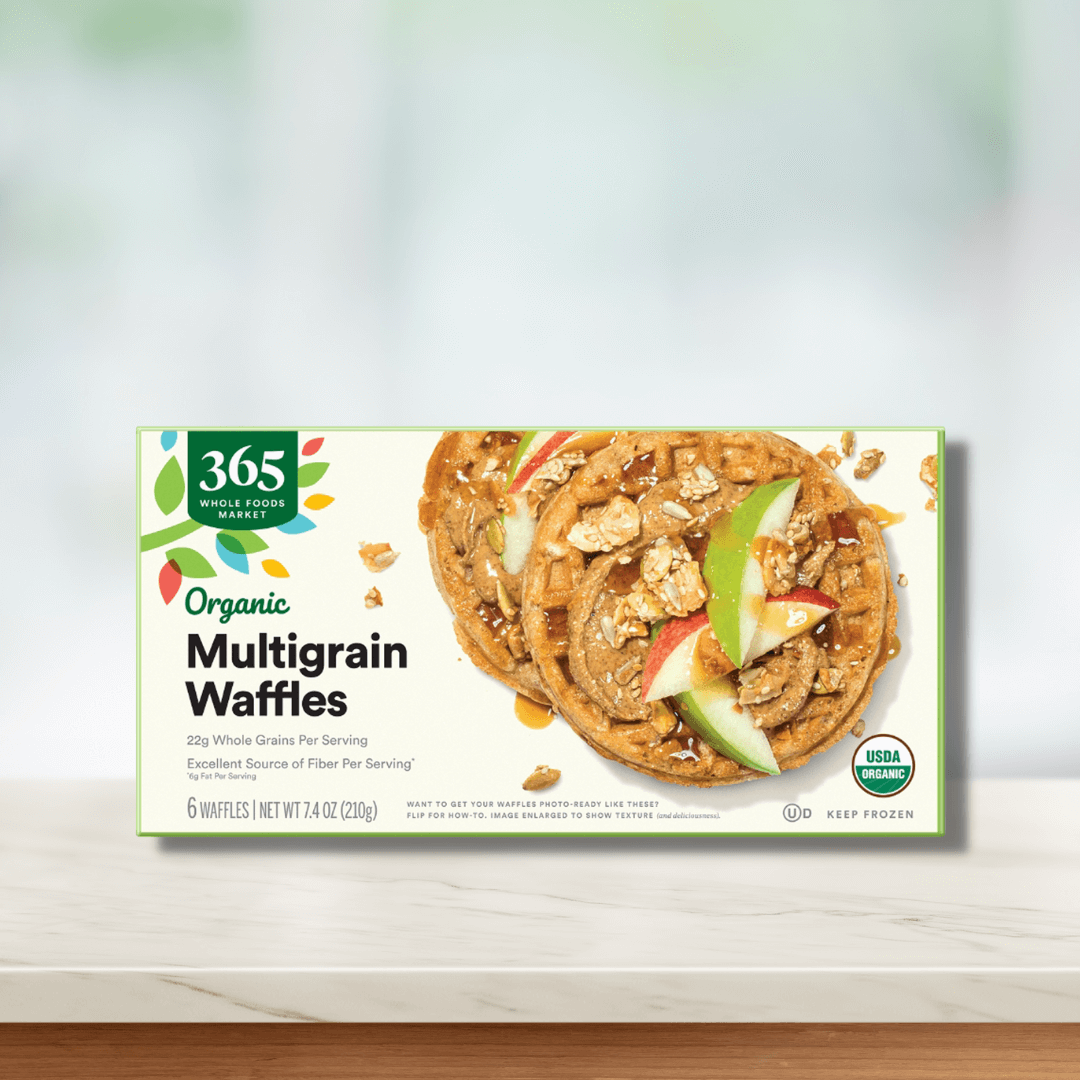 Leave it to Whole Foods to carry a vegan version of everything. The grocer’s 365 range offers vegan homestyle waffles in both regular and miniature sizes. The Blueberry, Multigrain, and Mini Blueberry are also plant-based. Stock up and treat yourself to a thick and fluffy waffle whenever the craving calls on a random Wednesday morning. Pro tip: the mini waffles are excellent for creating crowd-pleasing breakfast boards.
Find out more 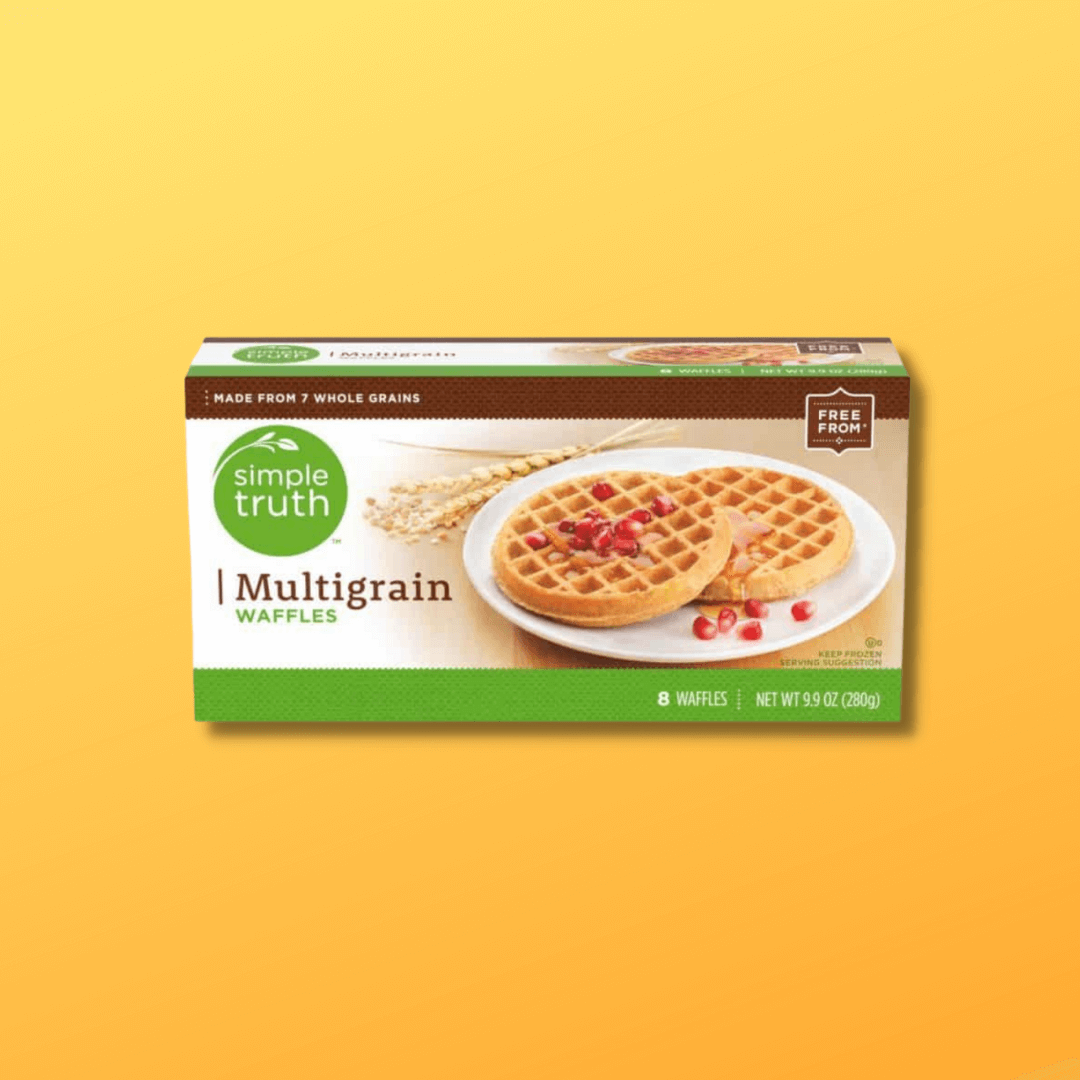 Kroger’s better-for-you Simple Truth line is reliably vegan-friendly, proving that quality plant-based options have hit the mainstream conventional market. Look for the Organic Blueberry Waffles and Gluten-Free Homestyle Waffles during your next shopping trip to Ralphs. Use these as a vessel for your favorite waffle toppings from fresh fruit to nut butter to powdered sugar (or try all three at once).
Find out more