For decades, tofu was the dominant alternative for vegan eggs. Sure, a block of soy can scramble nicely and blend up into a passable quiche, but the taste and texture were never quite spot on to the chicken egg-based dishes of our past. JUST—formerly Hampton Creek—set out to change that. After a number of trial products ranging from vegan mayonnaise to cookie dough, the brand finally settled on the innovation most likely to change the world: a vegan egg replacement that could scramble, bake, and fry just as well as its bird-based inspiration. JUST Egg is a veritable game changer, not just for vegans craving familiar comforts, but for the foodservice industry and the planet. The recognizable yellow bottle has become a mainstay on most supermarket shelves, integrated itself onto omnivore restaurant and café menus, and can even be seen in commercials during primetime television. We like to think the folks at JUST conjured up some vegan magic, but the truth is, there’s a good amount of food science and research that went into this revolutionary, plant-based product. Here’s everything you need to know about JUST Egg, plus five fantastic recipes to use it. 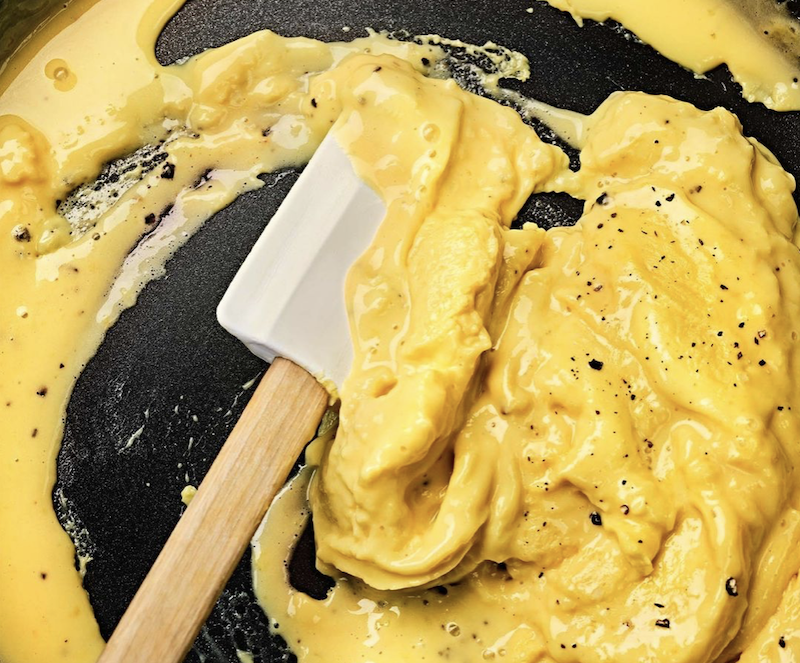 What is JUST Egg?

JUST Egg is a mung bean-based vegan egg substitute. The inaugural product comes in a bottled, liquid egg form that can be scrambled, fried, and baked in much the same way a whole chicken egg can. Subsequent products include Folded—egg patties perfect for sandwiches and toasts—and Sous Vide Bites (think bite-sized baked egg cups similar to Starbucks’ egg bites you find in the pastry case). While liquid JUST Egg can replace chicken eggs in a one-for-one swap in many culinary applications, note that it cannot replicate egg whites. For egg white substitutes, give aquafaba (chickpea brine) a try.

Unlike many plant-based alternatives, JUST Egg doesn’t rely on soy. The main ingredient is mung bean protein isolate. This unexpected base supposedly lends itself to JUST Egg’s versatility. We won’t sugar-coat it, though—JUST is a product of scientific innovation and consequently is made from a handful of ingredients you can’t find at the store. In addition to mung bean, JUST contains water, canola oil, and less than two percent of dehydrated onion, vegan natural flavors, soy lecithin, salt, potassium citrate, sugar, tapioca syrup, gellan gum, and a few preservatives. Don’t let that shock you—the ingredient list is in line with many plant-based products, so if you have Impossible patties in your fridge or vegan chicken nuggets in your freezer, you’ll likely find they contain the same (as do countless vegan and non-vegan packaged goods). 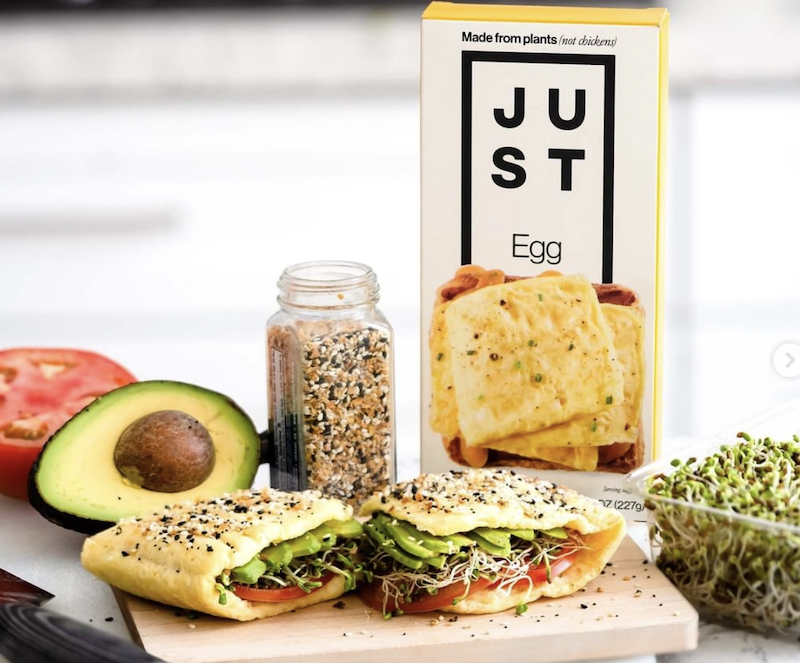 Healthy is a relative term and it all depends on an individual’s definition. If “healthy” to you means only ingredients you recognize, you may want to stick to your tofu scrambles and chickpea flour omelet. However, if “healthy” means no hormones or cholesterol and a decent macronutrient profile, then JUST Egg will fit your standards just fine. A three-tablespoon serving of liquid JUST Egg contains 70 calories, five grams of unsaturated fat, 170 milligrams of sodium, and five grams of protein. In comparison, a large chicken egg (the standard size) also contains 70 calories in addition to five grams of total fat (1.5 grams of harmful saturated fat), 185 grams of cholesterol, 70 milligrams of sodium, and six grams of protein. What isn’t noted on chicken egg nutrition labels is the FDA allowance for trans fat. Any food with 0.5 grams or less can claim to contain zero grams of trans fat. So, let’s say a chicken egg contains 0.4 grams. If you ate two eggs, you’d be up to 0.8 grams of this damaging fat, completely ignorant of the fact. While 0.8 grams may seem negligible, the USDA does not offer a minimum amount for trans fat—any amount can be harmful, and the US Dietary Guidelines recommend to keep consumption “as little as possible” or not at all. This is due to the risk trans fat consumption poses for coronary heart disease.

Like most processed plant-based products, JUST Egg is a significantly healthier option than its animal-based counterpart and can be a part of a healthy diet when consumed in moderation.

The global human population consumes 1.4 trillion chicken eggs annually. This level of consumption requires 93 million acres of land and 51 billion gallons of water to sustain, according to JUST. To break that down, that’s 53 gallons of water per chicken egg. Yes, some of that is water for the chickens, but the vast majority of that is dedicated to growing the feed needed to raise egg-laying hens. Essentially, we’re growing food to produce food, which ultimately results in a dramatic loss of resources. By eliminating the chicken and making eggs from plants, JUST claims to use 98-percent less water than conventional chicken egg production. The brand also claims to use 86-percent less land and emit 93-percent fewer carbon dioxide emissions.

According to estimates suggested by the Food and Agriculture Organization (FAO), the world will have to produce 60-percent more food to feed an expected global population of 9.3 billion in 2050 if we continue with our current animal-based consumption rates. That simply doesn’t seem sustainable or possible given the fact that we cannot conjure up more land to meet those demands. Going plant-based is a viable solution, and the JUST Egg revolution is helping to curtail the incessant use of our natural resources. No, this single product won’t save the world—it’s going to take a lot more than a morning scramble—but it is helping to shift the mainstream perspective in the right direction. 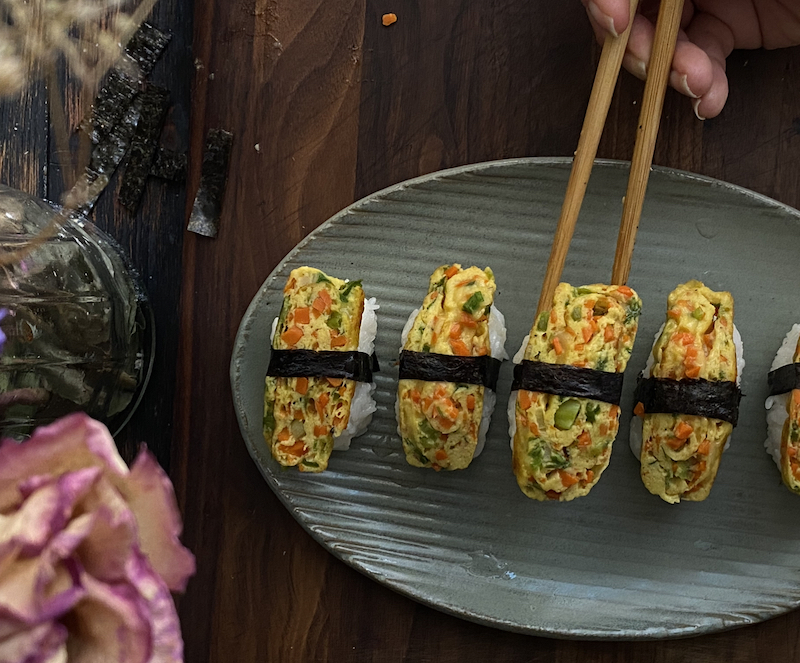 It’s hard to pull yourself away from the relaxing YouTube video for this recipe—The Korean Vegan’s soothing voice and methodic preparation of this Japanese dish are spellbinding. But when your stomach starts to grumble, scroll to the written recipe and make this tamago nigiri for yourself. Follow the instructions closely, and you’ll find you, too, can make great vegan sushi.
Get the recipe 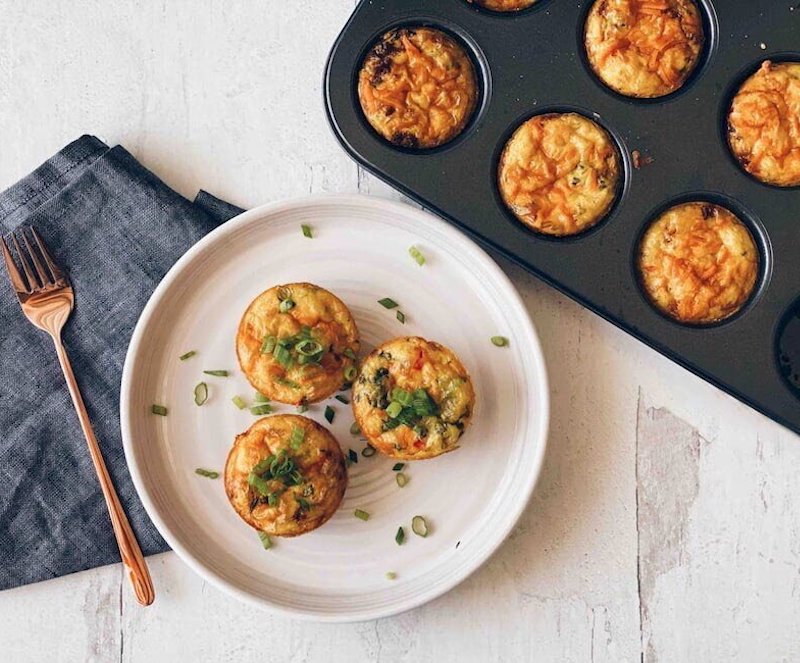 Those who love a savory breakfast will delight in these portable protein bites. Packed with smoky vegan “Chorizo” suspended in a fluffy but firm JUST Egg cup, two of these will suffice for a quick morning meal and a whole batch work well for a brunch buffet. Pro tip: freeze any extras and pop them in the oven for heat-and-heat breakfasts throughout the week.
Get the recipe 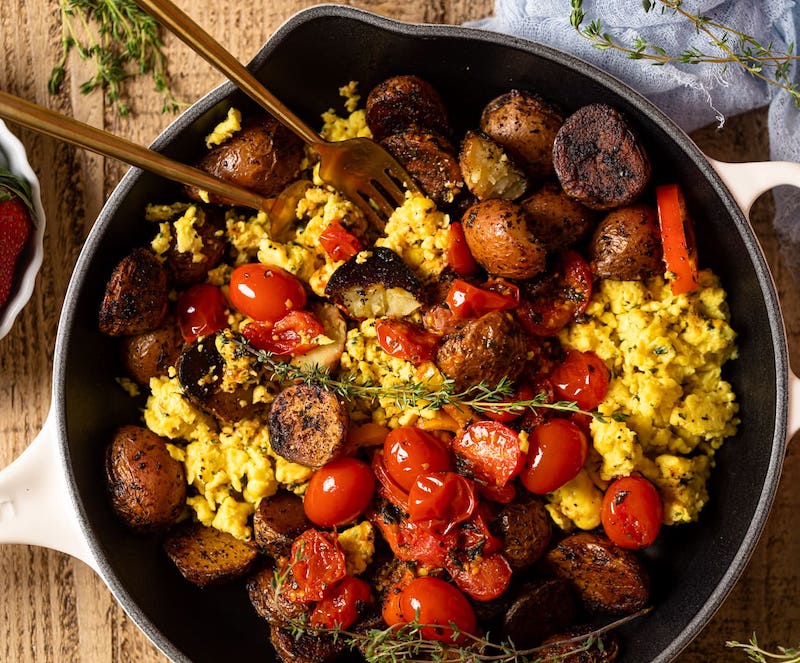 Bursting with juicy grape tomatoes, crispy potatoes, and fluffy JUST Egg, this hearty breakfast is satiating enough to enjoy for breakfast or dinner. It’s the perfect dish to make for a crowd of mixed eaters—particularly if some of those eaters are vegan skeptics. One bite and they’ll beg for seconds.
Get the recipe 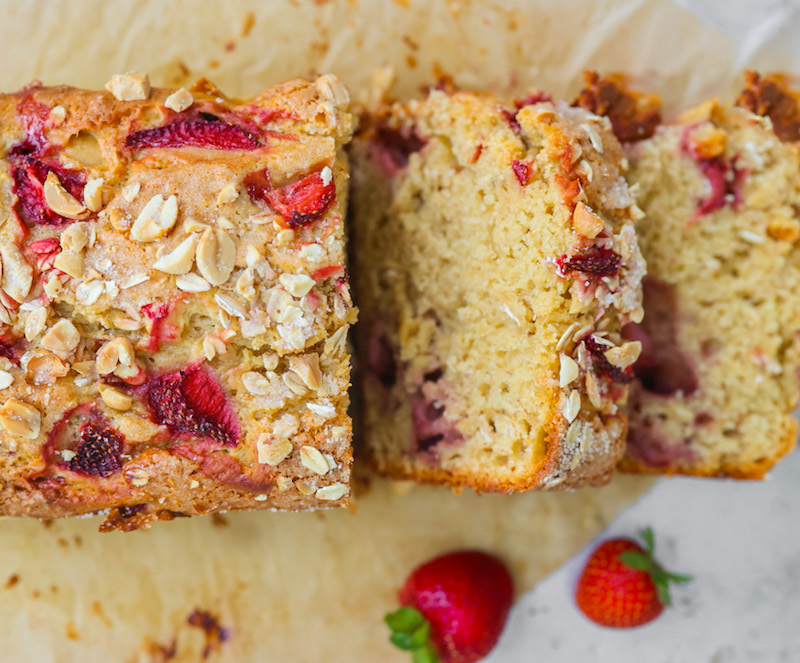 The classic sandwich just got a bit sweeter with this delightful, jammy quick bread. JUST Egg provides lift and structure just as a chicken egg would. The resulting snack cake is moist, dense, and perfectly reminiscent of PB&J in dessert form—without being too sweet.
Get the recipe 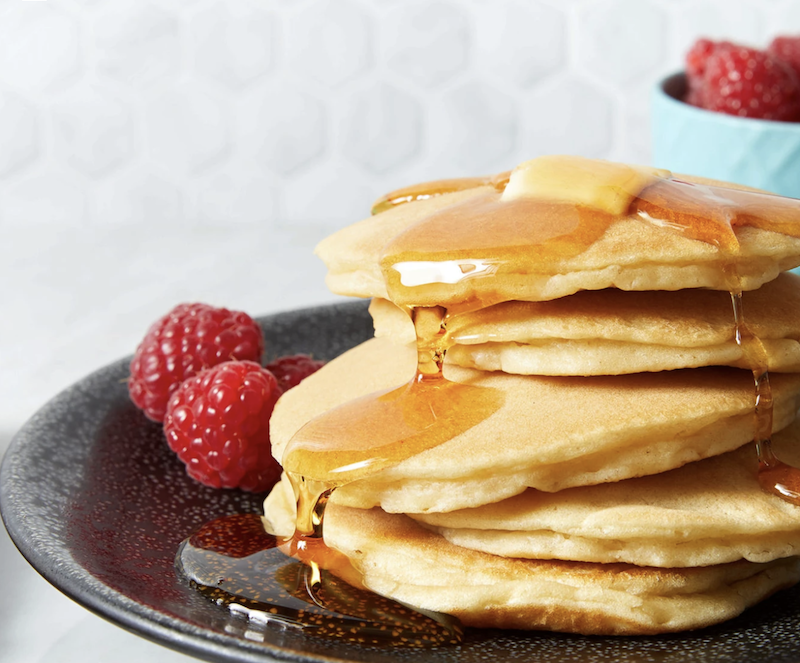 Whip up fluffy, diner-style pancakes in minutes with the help of JUST Egg. These homemade flapjacks are unfussy and serve as the perfect canvas for pure maple syrup, chocolate chips, or a thick pat of vegan butter. Pro tip: use the leftover JUST Egg to make a side of scrambled eggs for a tasty protein complement to your sweet stack.
Get the recipe

For more on plant-based meat and alternatives, read: