There was once a time when vegan holiday meals were extremely limited. Years ago, when celebrating amongst a mixed company of eaters, vegans had to make their own plant-based feast or scavenge through the few veggie sides that didn’t include butter, cream, or meat drippings. But vegan Thanksgiving roasts are making the feast a lot easier.

The vegan food market has dramatically evolved since then and vegan holiday roasts start hitting mainstream shelves as early as mid-October. We’ve tasted them all and even tried our hand at making our own with the guidance of a few brilliant recipes. Whether you opt for store-bought or don an apron, here is your guide to the vegan holiday roasts everyone will enjoy.

Most people who celebrate Thanksgiving look at a turkey and see it as a symbol of fall, family, and festivity. The glistening gold centerpiece of many Thanksgiving tables is something of joy thanks to generations of tradition and ignorance. Individuals who abstain from eating animals see something else entirely. Factually speaking, there is a dead bird on the table whowas slaughtered around six months old (up to 24 months if they’re a heritage, local, or free-range bird) and is one of 50 million killed just for Thanksgiving alone. 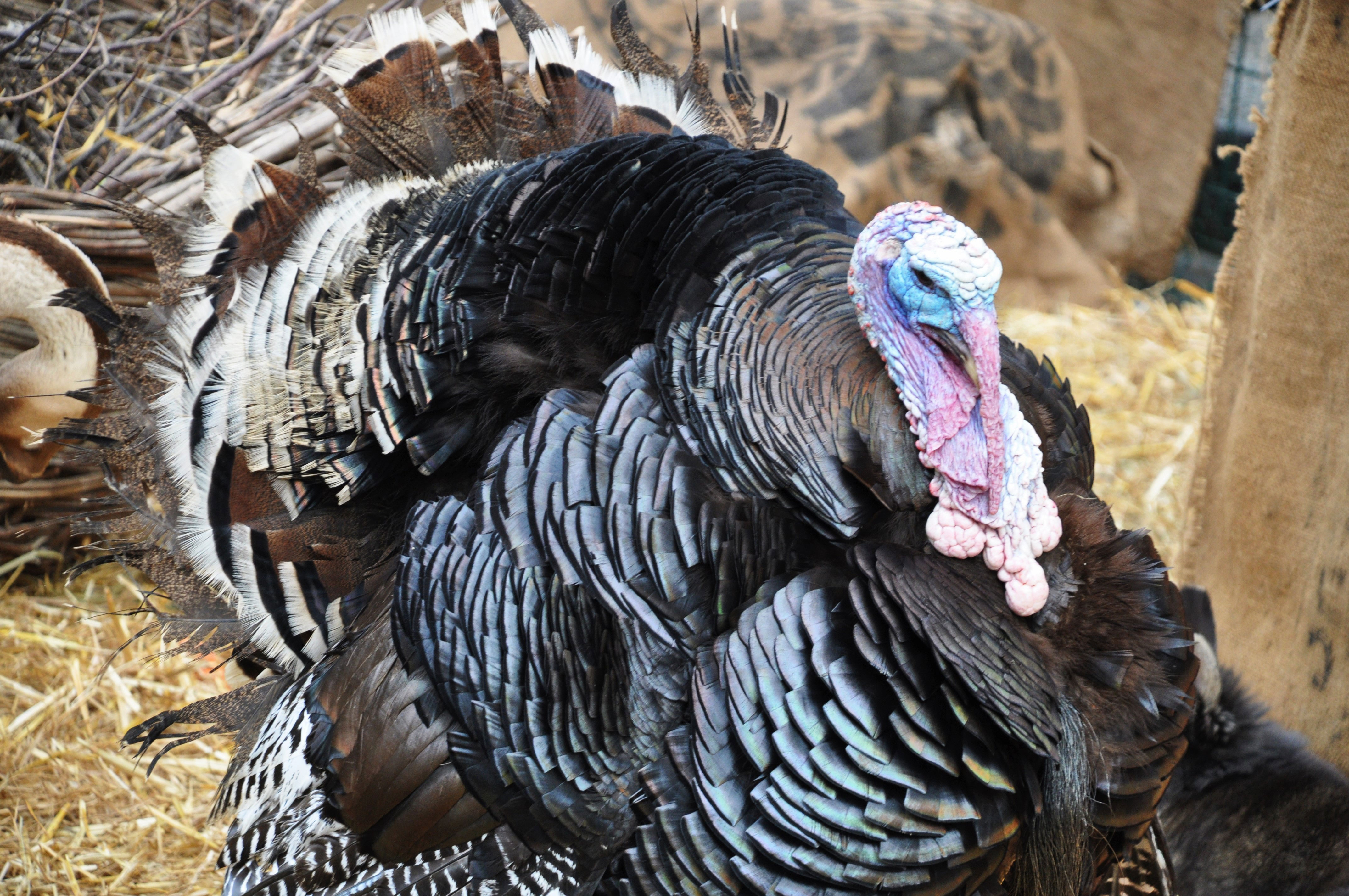 In regards to the environment, turkey farming presents similar issues to chicken farming. Industrial raising and slaughtering of birds leads to immense water and air pollution due to the collective waste of millions of animals. Those who attempt to make a more sustainable choice by purchasing from small family farms also contribute a significant climate footprint, as these birds are often raised and killed in middle America, packaged, and shipped via planes, trains, and automobiles to homes across the country.

What are vegan Thanksgiving roasts made from?

The vegan Thanksgiving roasts options have largely expanded from the inaugural Tofurky debut in 1997, but the vast majority of them have stuck to the original ingredients.

Seitan—a “meaty” plant-based food made from vital wheat gluten—and tofu are two of the most heavily used products to create the succulent plant-based roasts that are featured on many a vegan table. Most roasts are seasoned with spices such as thyme, sage, and rosemary, then stuffed with a wild rice or savory stuffing mixture. 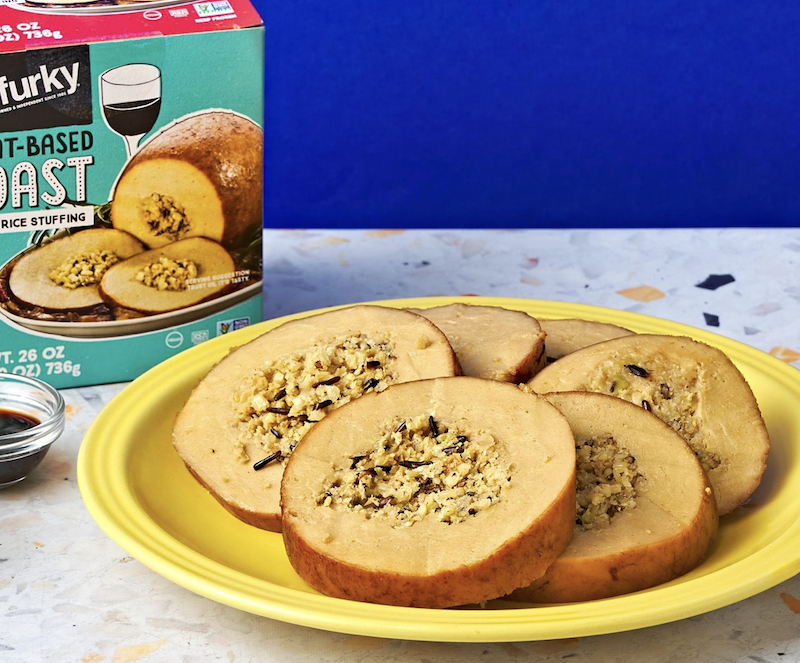 Like turkey, they’re high in protein and often contain fair amounts of calories and fats. For example, a single serving of the original Tofurky contains 300 calories, 10 grams of fat, and 33 grams of plant-based protein.

The top 10 vegan Thanksgiving roasts you can buy

We’ve listed several excellent homemade roast recipes farther down, but these are generally for the patient and adventurous cook. Those who prefer a heat-and-eat option should look to any one of these 10 fabulous store-bought vegan roasts. 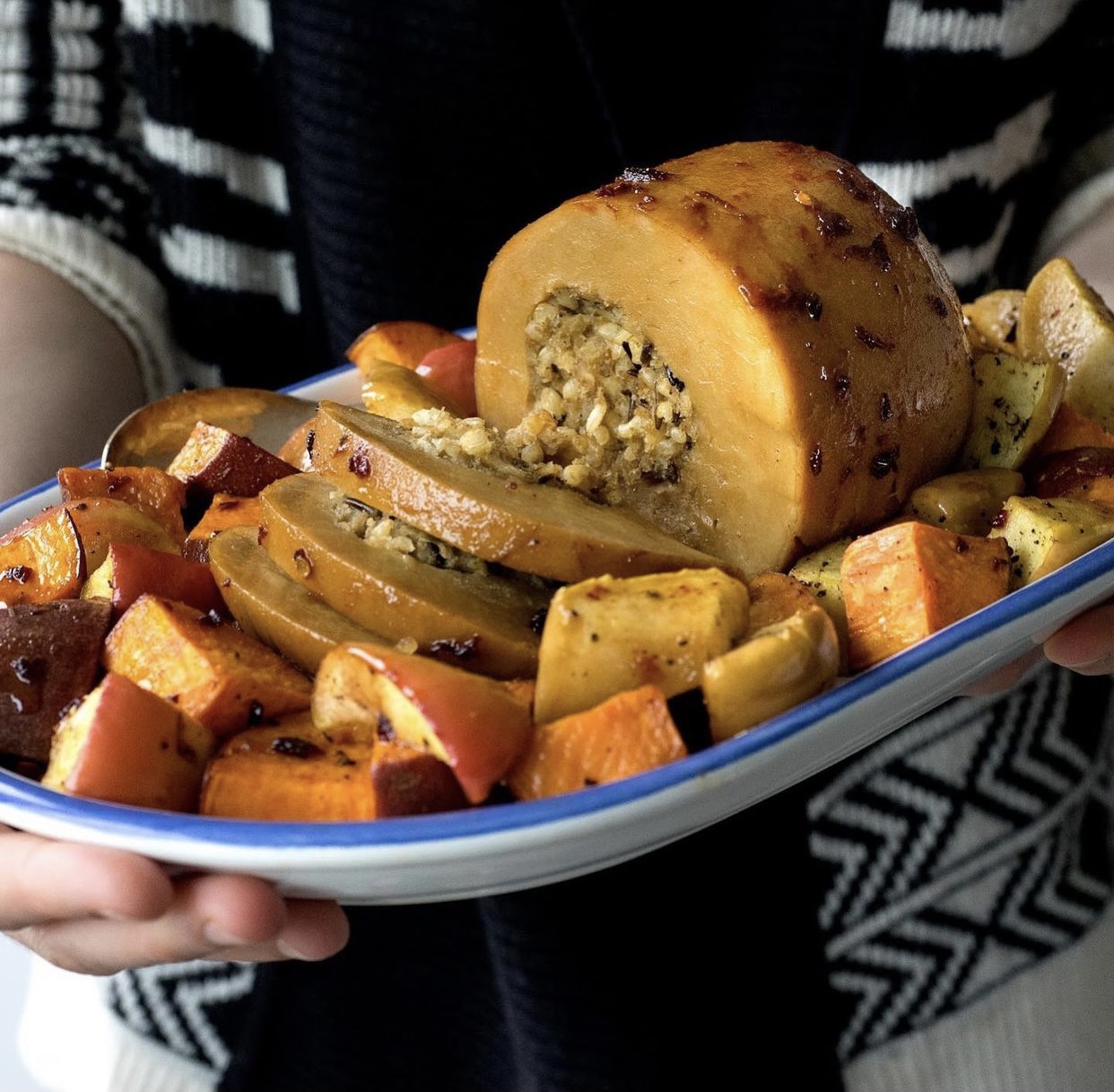 Founded in 1979, Tofurky is a veteran in the vegan roast market. The all-natural, plant-based company launched commercial production of its signature Tofurky Holiday Roast in 1995 and built a loyal fanbase throughout the decades.

The tender, savory roast is made of seasoned seitan and tofu, giving it a meaty chew and satisfying taste. The round is filled with wild rice and breadcrumb stuffing and comes with a side of vegan gravy. Beyond the original, Tofurky fans can opt for the seasonal Ham Roast with Amber Ale Glaze or pick up an entire holiday meal with The Feast. The box is packed with an original Holiday Roast, gravy, and non-dairy chocolate brownie. Tofurky is making it easier than ever to have a very happy holiday.
Find it here 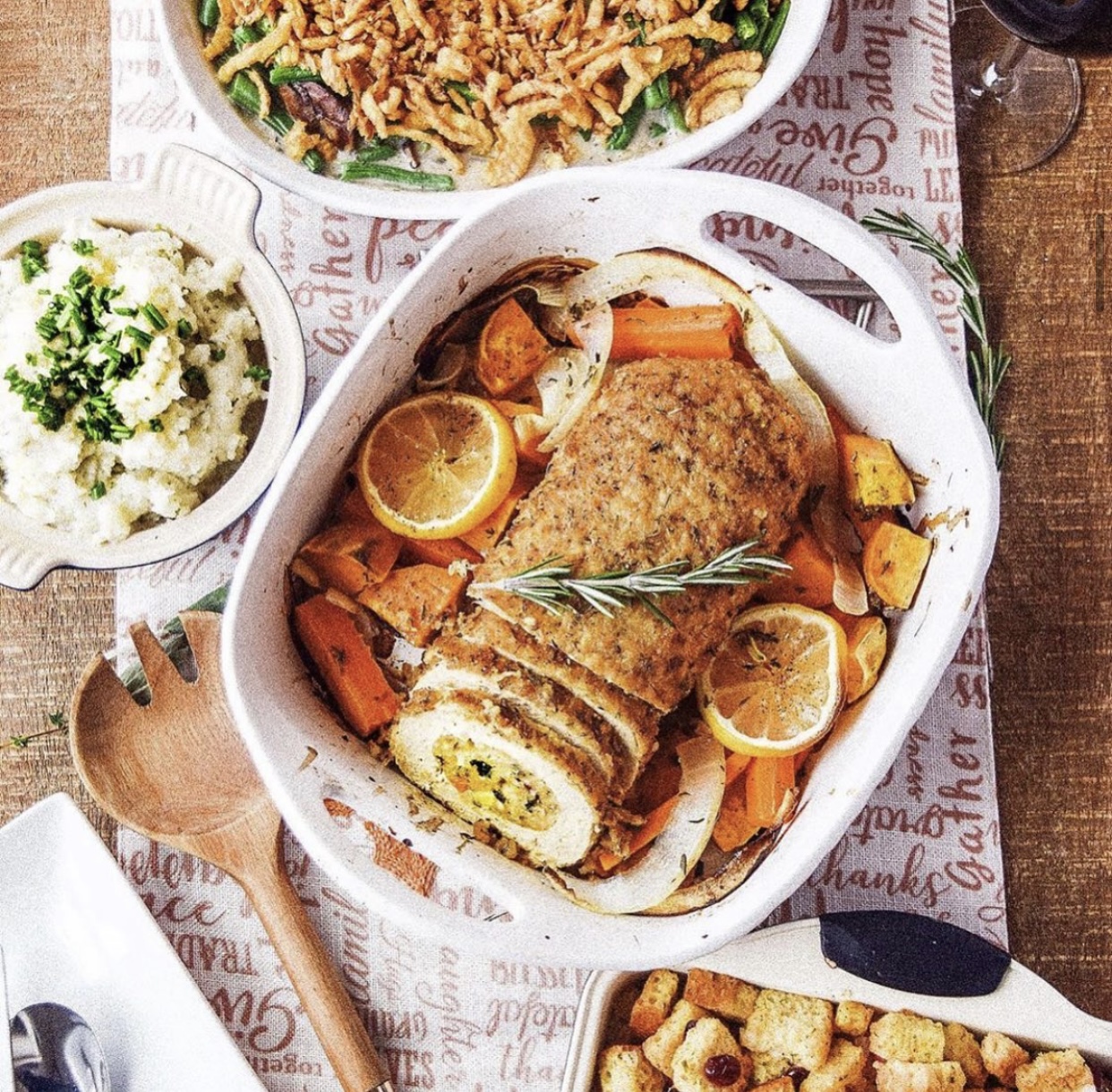 Like Tofurky, Gardein is another company that helped to popularize plant-based meat. Come holiday season, Gardein offers two outstanding main meal options. The Savory Stuffed Turk’y includes two individual-sized breaded Turk’y roasts that are crispy on the outside and tender on the inside. Each is filled with moist, wild rice stuffing studded with tart cranberries. The box also includes a packet of gravy.

Gardein’s more traditional Holiday Roast is similar; it also includes the cranberry wild rice stuffing and a crispy-breaded exterior, but the package contains one large roast big enough to serve eight (including gravy, of course). Pick up the Turk’y if it’s just for you or choose the Roast to feed a crowd.
Find it here 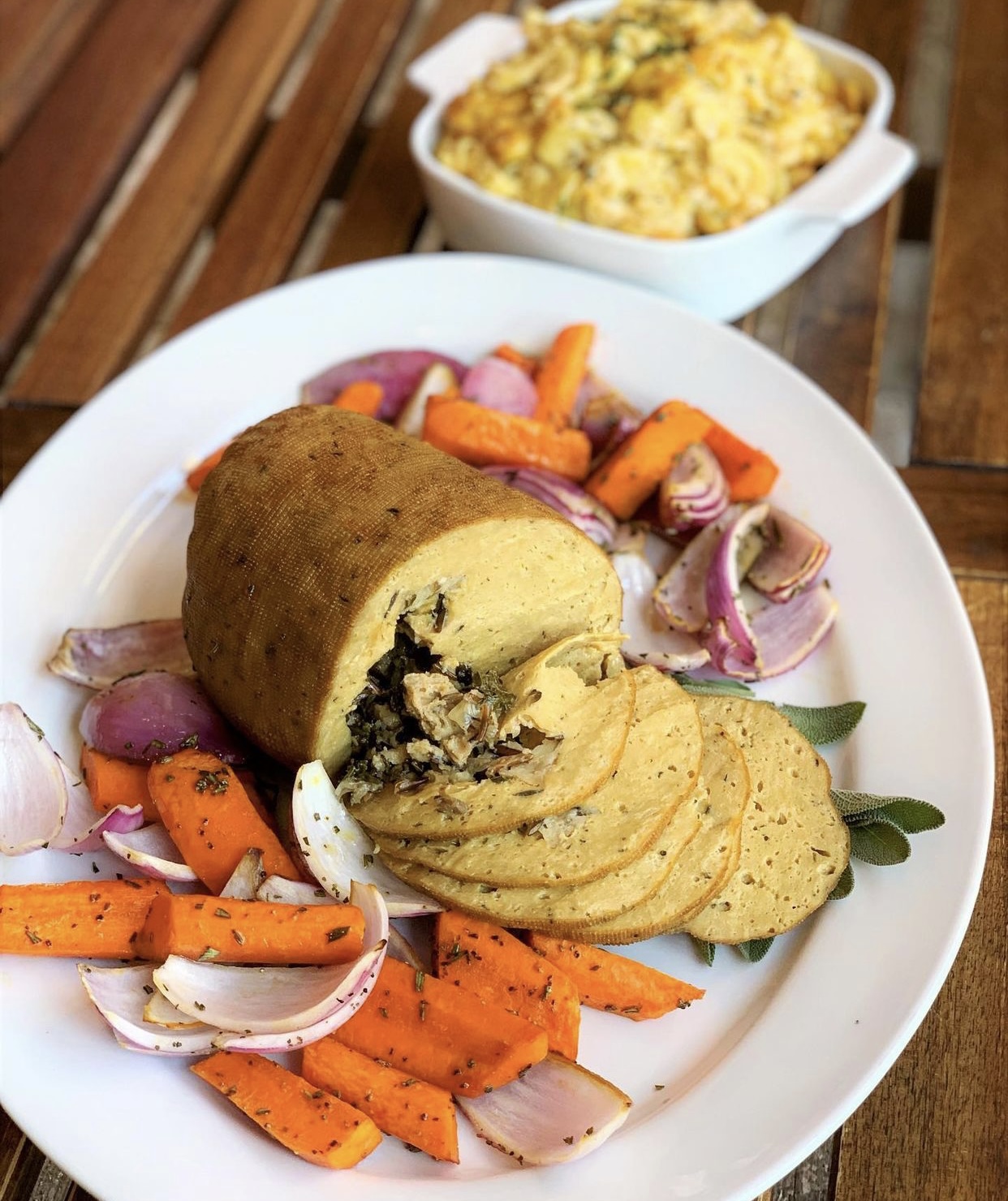 Based in Minneapolis, MN, The Herbivorous Butcher has garnered national attention. The growing brother-and-sister-run company was even featured on the Food Network’s hit show, Diners, Drive-Ins, and Dives. The Turkey-Free Feast ships nationwide and contains an assortment of vegan holiday meats and cheeses including a 2.5-pound Stuffed Turkey, Hickory Bacon, Smoked Gouda, Maple Sage Breakfast Sausage, Chive Cheddar Cheese Sauce, Roads End Organic Quick Gravy, and a bag of Dandies Marshmallows to top your sweet potato casserole. An Unstuffed Turkey Roast, meatloaves, and a wide selection of cheeses are also available to purchase and ship a la carte.
Find it here 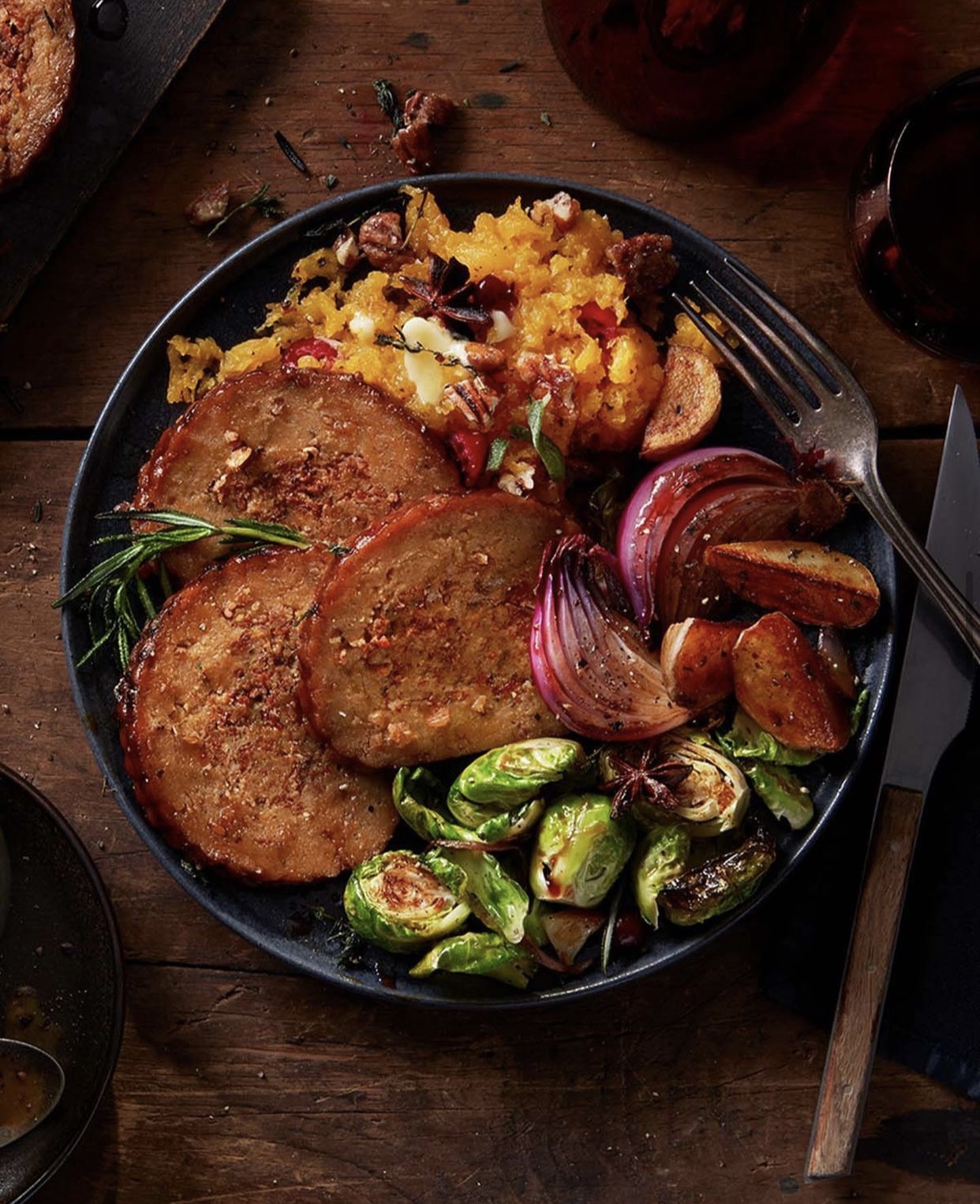 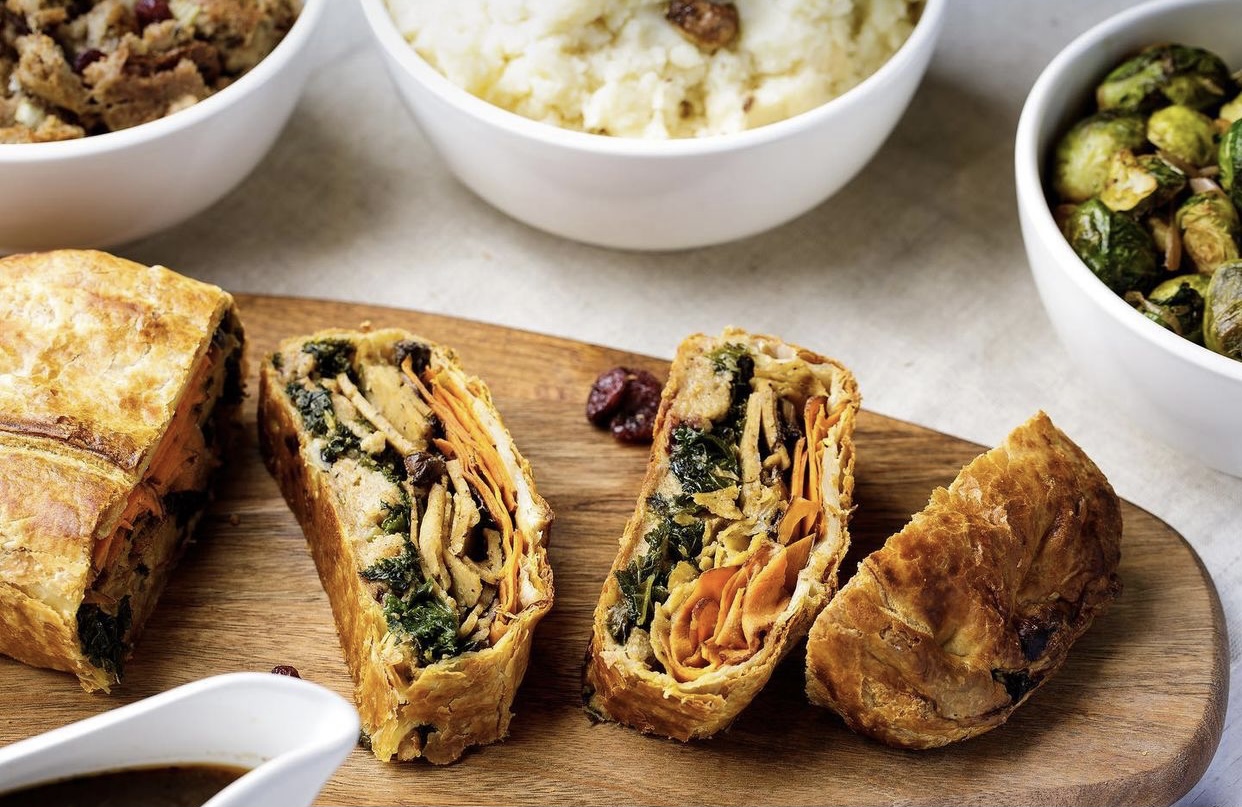 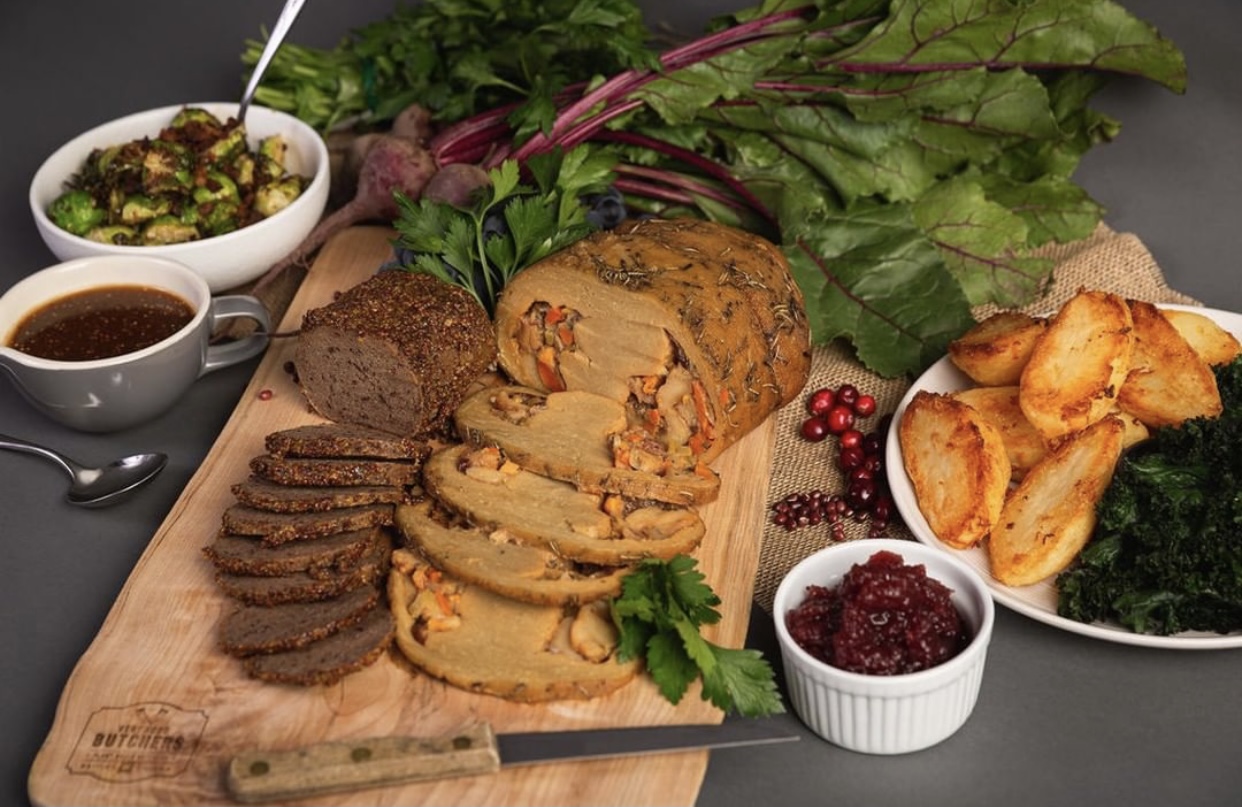 The Stuffed Beast is for stuffing-lovers. Cut into this succulent seitan-based roast and prepare for an outpour of seasoned stuffing goodness. This vegan butcher is based in Canada, but it ships to the US and UK as well. Place your order sooner than later, as they’re very likely to sell out.
Find it here 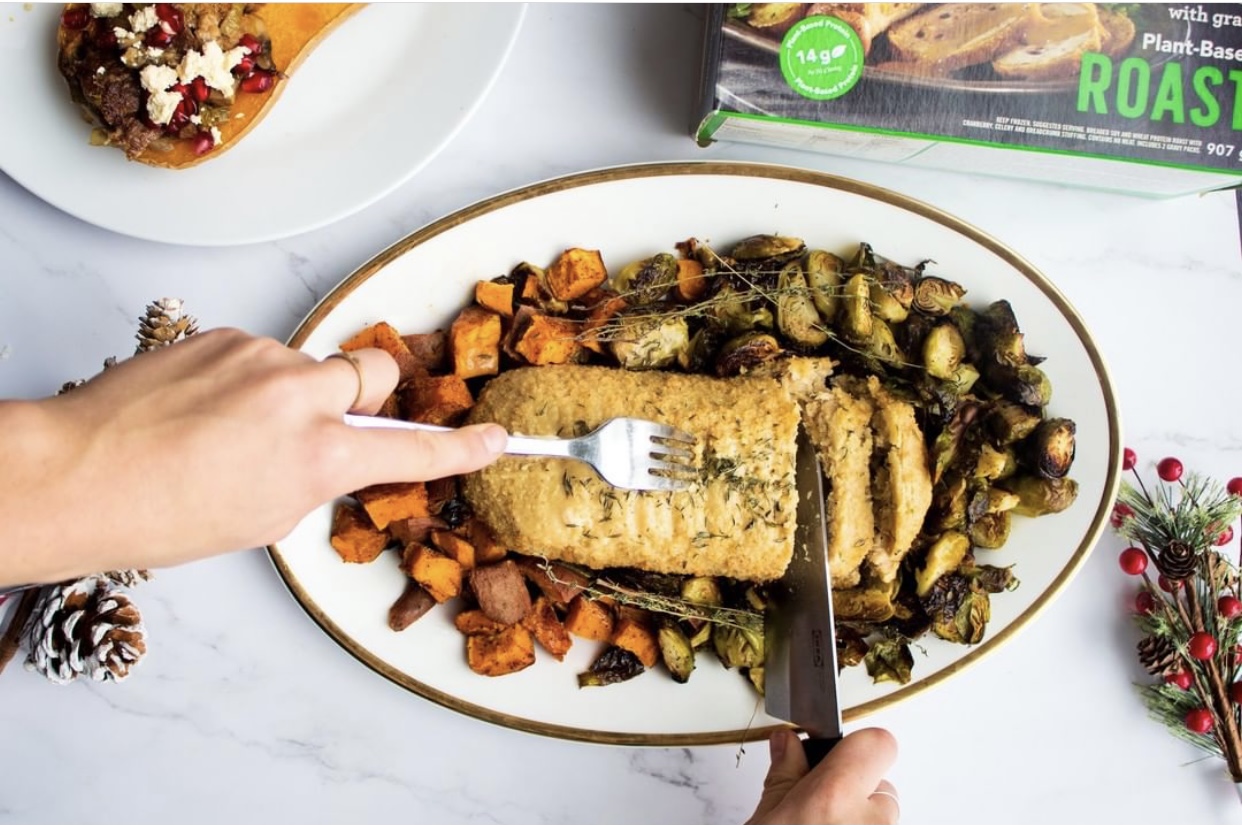 Canadian Thanksgiving has passed, but this limited-edition Stuffed Turk’y Roast with Gravy can certainly be served for the winter holidays. This juicy, breaded seitan centerpiece is packed with cranberry-studded stuffing and is best served in a pool of warm, silky gravy. While some Sol Cuisine products are available in the US, this latest item is only available in Canadian stores.
Get the recipe 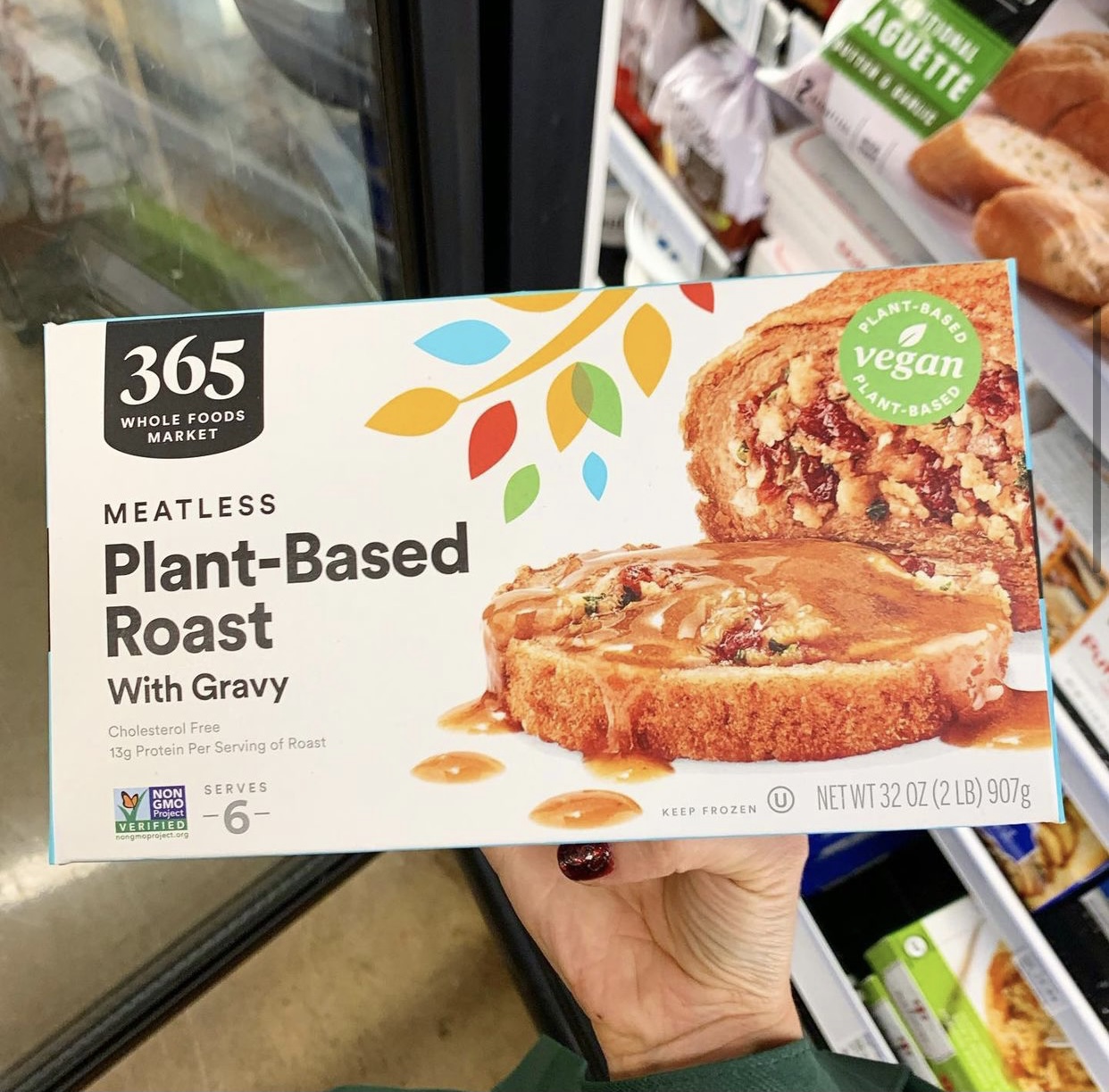 Chef Chloe Coscarelli extended her partnership with Whole Foods to bring back her curated vegan Thanksgiving favorites. If you missed out last year, don’t make that mistake again. The grocer is offering Coscarelli’s Cremini Mushroom Roast with Mushroom Gravy along with a medley of sides including Green Beans with Roasted Shallots, Coconut Sweet Potato Casserole, and Jalapeño Cornbread Dressing (aka stuffing).

Decided to throw a last-minute Friendsgiving? Head to the freezer aisle and pick up a 365 by Whole Foods Market Plant-Based Roast. The breaded, seitan-based centerpiece is filled with cranberry-speckled stuffing and includes a packet of vegan gravy. Is it as sumptuous as Coscarelli’s main? Not quite, but it’s certainly satisfying in a pinch.
Find it here 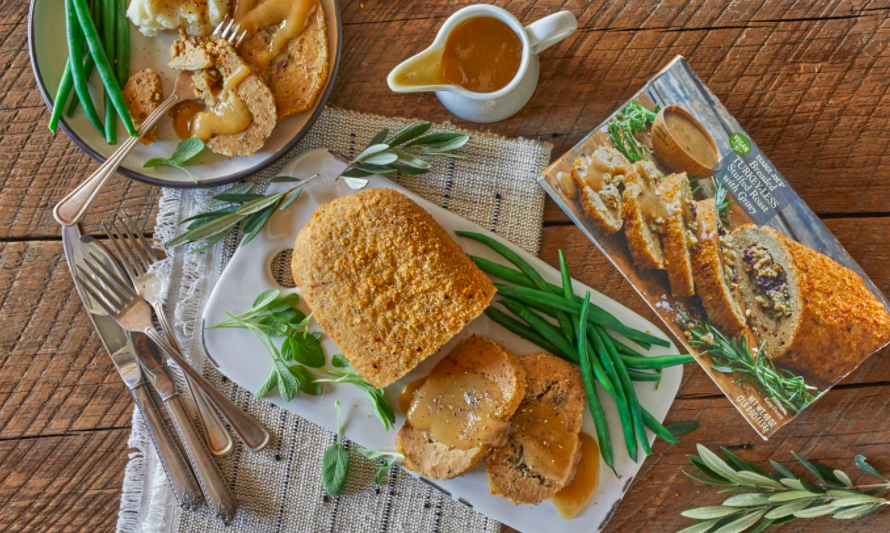 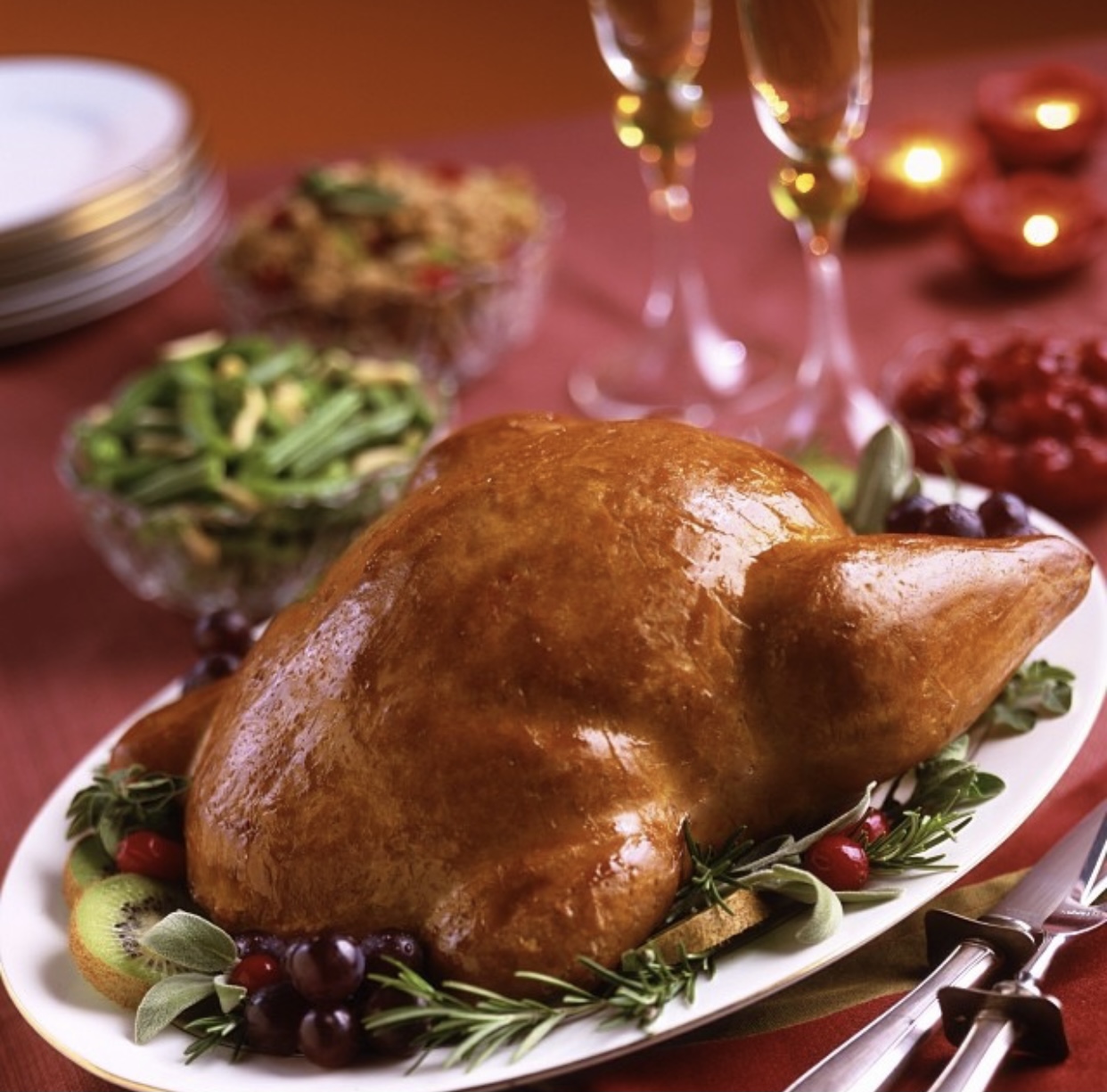 Expect a few double-takes from your guests as you plant this golden vegan turkey on the table. It’s entirely plant-based, but it looks like a traditional bird right down to the golden crispy “skin.” Carve it up to reveal its juicy interior and serve with a side of tender stuffing and gravy—both included in the box.
Find it here

Preparing your own vegan roast is ideal when hosting a potluck—you make the main and ask others to bring the sides. Here are five solid plant-based roast recipes to impress all your guests. 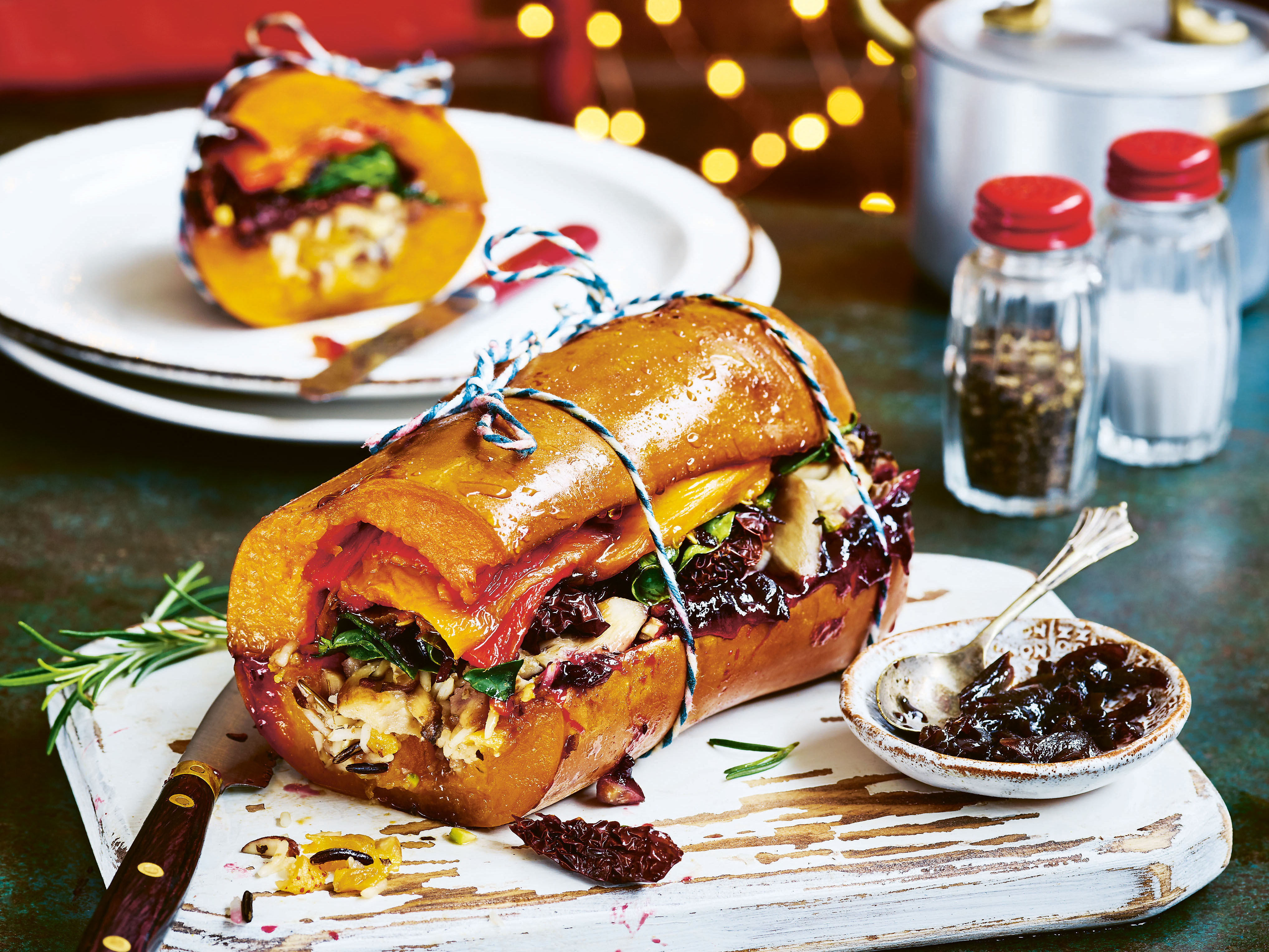 This vegetable-forward main is not a roast in the traditional sense. No one will take a bite and believe it’s meat. However, it’s a stunning and delicious centerpiece, and it’s roasted, so there you go. Playing off the grotesque yet popular Turducken trend, this more compassionate dish involves a fork-tender butternut squash stuffed with layers of wild rice, sauteed mushrooms, glazed onions, roasted red peppers, and lightly wilted spinach.
Get the recipe 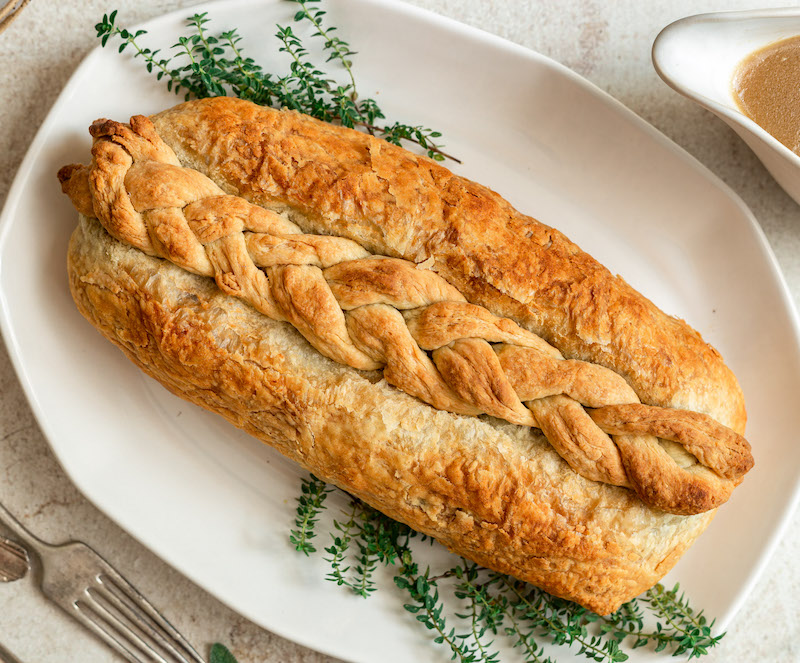 There’s a lot of umami going on in this mushroom-and-vegan-beef centerpiece. The “meaty” filling is enriched with fragrant herbs such as sage, thyme, and rosemary and married with tender kale for a bit of balance. Wrapped in butter-brushed puff pastry and baked until golden brown, you may want to consider making two, as your guests will surely ask for seconds.
Get the recipe 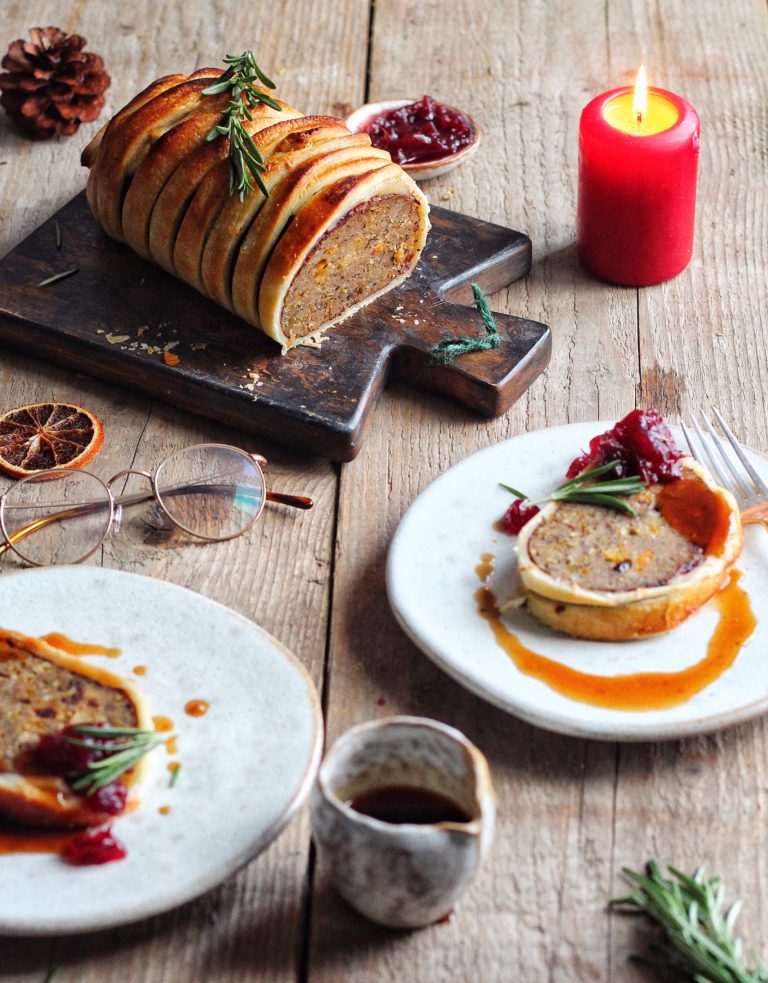 Sweet or savory, wrap any food in puff pastry for instant curb appeal. Not only is the flaky golden pastry more presentable than a two-pound hunk of brown vegan meat, it also adds textural contrast to an otherwise one-note meal. In regards to the roast itself, we love this recipe for its inclusion of holiday ingredients such as chestnuts, cinnamon, and dried cranberries.
Get the recipe 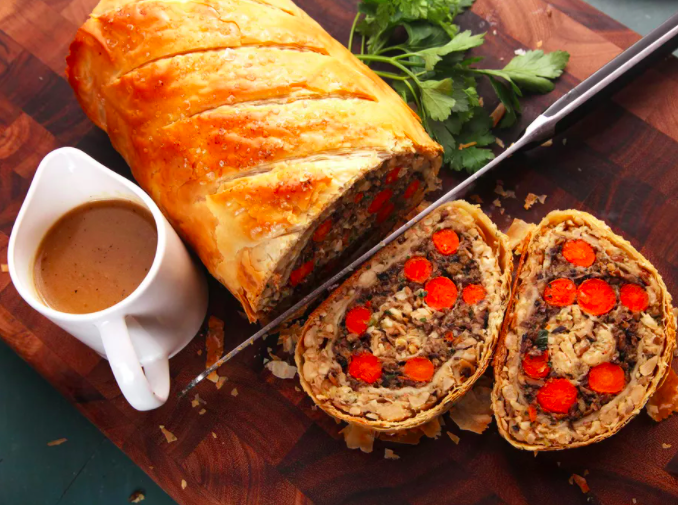 More veggie-forward than the typical roast but not quite all veg, this entrée strikes the perfect balance between the two. The pastry-encased center includes a swirl of savory mushroom duxelles, roasted carrots, and a cashew-cannellini bean mixture to impart a varied yet harmonious array of tastes and textures.
Get the recipe 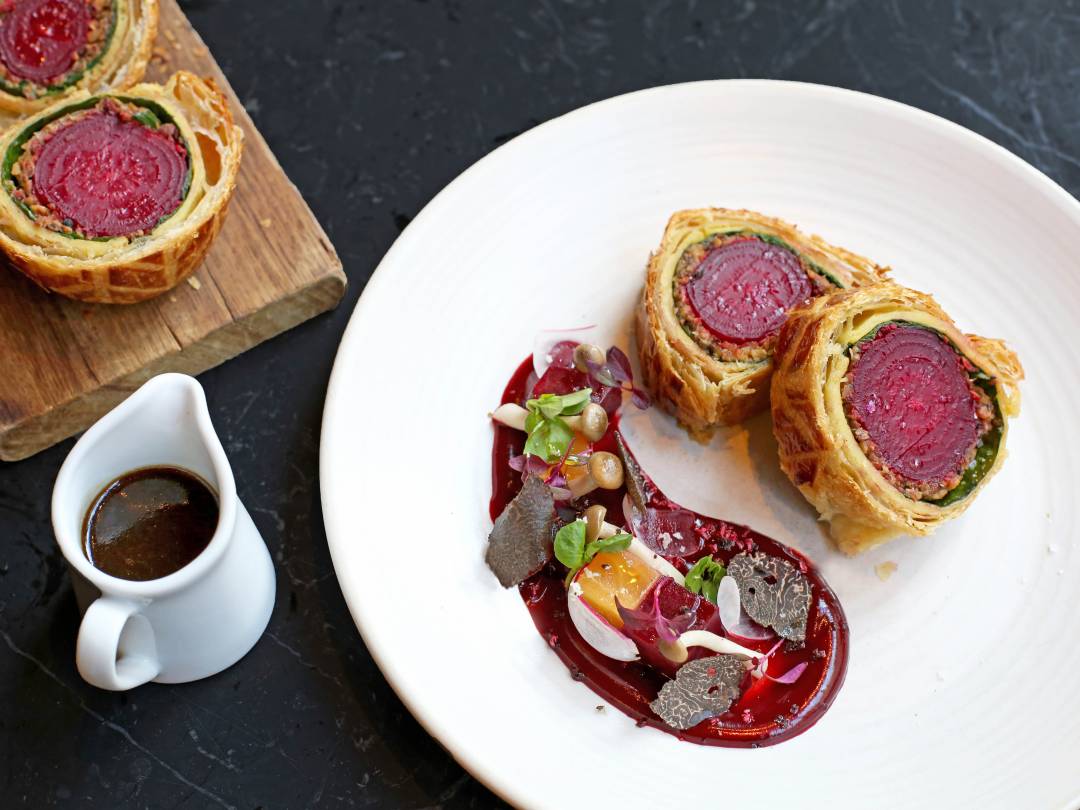 For all of celebrity chef Gordon Ramsay’s former ranting at the expense of vegans, he makes a decent vegan roast. This impressive beet centerpiece is encased in golden pastry, truffle-infused mushrooms, and bright blanched spinach. Don’t skip the vegan jus—it’s a necessary flavor element to transform a pastry-wrapped beet into a piece of edible excellence.
Get the recipe

A hearty loaf of seasoned vegan “Beef” gets a sweet and tangy glaze in this do-it-yourself roast recipe. While gorgeous on the outside, the stuffing-stuffed interior is equally as impressive. Speckled with crunchy roasted hazelnuts and tart, chewy cranberries, you may find yourself asking for another slice just for a few more bites of this addictively good stuffing.
Get the recipe