Milk’s favorite cookie is accidentally vegan. Well, at least some are. The classic Oreo and many of its flavor iterations are completely devoid of animal ingredients, which leads to a natural follow-up question: what is the cream filling made out of? Well, it’s made of quite a few ingredients, but none of them are dairy-based milk or cream. Take that as you will, but despite its less-than-clean ingredients, few can deny the Oreo cookie of its comforting and nostalgic taste and texture profile. Oreos are familiar, accessible, and darn good with or without a tall glass of chilled oat milk. Curious about the vegan nature of this 110-year-old cookie, we dove into the history (and the ingredients) of the iconic Oreo. 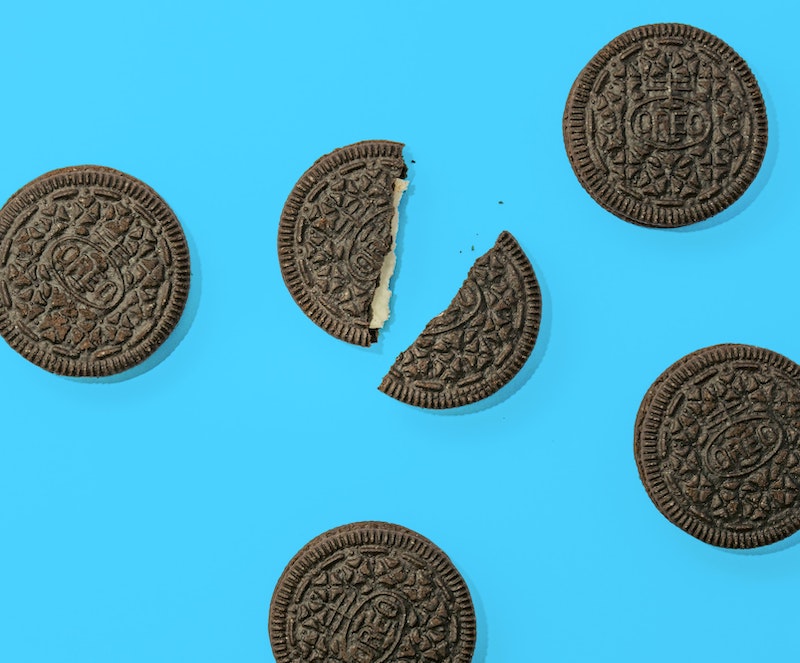 Back in the day before vegan cookies were readily available on supermarket shelves, newly transitioned plant-based eaters relied on the Oreo for a sweet treat. It’s one of the most widely known secrets amongst the vegan community—who would have thought a cream-filled sandwich cookie would eschew dairy? But Oreos weren’t always vegan-friendly. Up until 1998, the Oreo filling contained lard. The move to swap the lard for a plant-based fat was partly due to a decades-long contention with the Hydrox cookie. Technically the original chocolate-and-cream sandwich cookie, Hydrox did not contain lard and therefore could claim the Kosher label. While Oreos had steadily outperformed Hydrox since they debuted in 1912, the original Hydrox brand was popular amongst the Jewish community and experienced occasional resurgence in sales. Once the Oreo cookie could claim to be Kosher and vegan, Hydrox only survived a few more years, officially being discontinued in 2003. However, if you’re curious about the cookie that inspired (inspired is a loose term—the National Biscuit Company, now Nabisco, essentially stole the idea) the Oreo, you can purchase a box of Hydrox on Amazon. Leaf Brands resurrected the Hydrox in 2015 and claims it’s a less-sweet version of the Oreo that stays crisper when dunked in milk and is made with un-hydrogenated oils, higher-quality cocoa, and no high fructose or corn syrup. A six pack of Hydrox goes for $23.99, and we’re almost curious enough to try the first plant-based iteration of the Oreo that never gave up a fight. Truly, the name was its demise.

We can definitely say that as of 1998, the classic Oreo is vegan. So are the Double-Stuf (which are actually only 1.8 times more stuffed, but who’s counting?), Mega Stuff, Gluten-Free and Gluten-Free Double Stuf, and Golden and Golden Double Stuf. Any fudge-covered Oreo is not vegan, as the chocolate coating contains dairy. Oreo Cakesters are also not vegan. But then there are the 85-plus Oreo flavors to consider. Not all of these flavors are available now or even in the US, but between the Thins and the Flavors and the Classics, the average US consumer faces a choice of over 25 variations at this given moment. Before you reach for that novelty or limited-edition flavor, be sure to check the ingredients, as some of these options contain animal-based ingredients.

Beyond what Nabisco calls the Classics—the classic Oreo, Golden Oreo, Gluten-Free Oreo, and the Stuf variations of these flavors—there are the Flavor Oreos and Oreo Thins. The latter claims to be a “lighter, crispier” version of the original Oreo. In reality, a single Oreo Thin is only seven calories less than a single classic Oreo (35 compared to 42) and four millimeters thinner. Perhaps a bit ironically, Thins also come in an Extra Stuf variety. If you love filling and could do without the cookie part, this might be the Oreo spin-off for you. Thins come in a number of flavors that mimic the currently rotating line of Oreo variations including Mint, Golden, Lemon, and Dark Chocolate. All of these options are vegan.

Thins aside, the current line up of vegan Oreo flavors include Mint, Lemon, Dark Chocolate, Chocolate Hazelnut, Java Chip, Chocolate, Birthday Cake, Chocolate Peanut Butter Pie, Peanut Butter, Carrot Cake, Chocolate Marshmallow, and Caramel Coconut. These flavors do not contain dairy, eggs, gelatin, or honey; however, if you avoid processed cane sugar or artificial flavors that are not explicitly labeled vegan, these cookies are not suitable for those diet standards.

How to make vegan Oreos

Despite the wild variations of the original Oreo, the ingredients are fairly consistent. All of the cookies contain sugar, unbleached enriched flour, palm and/or canola oil, artificial flavors, cacao, high fructose corn syrup, leavening, salt, soy lecithin, and a variety of food colorings. The differentiation in flavors mostly comes from the artificial flavors and colorings, though the Mint does contain some peppermint extract and the chocolate cream renditions have a bit more cocoa.

Homemade Oreos are far less complicated. Yes, they won’t be as crispy or perfectly embossed, but if Yellow 5 Lake or palm oil aren’t your jam, it is possible to make a cookie that is Oreo-adjacent at home. 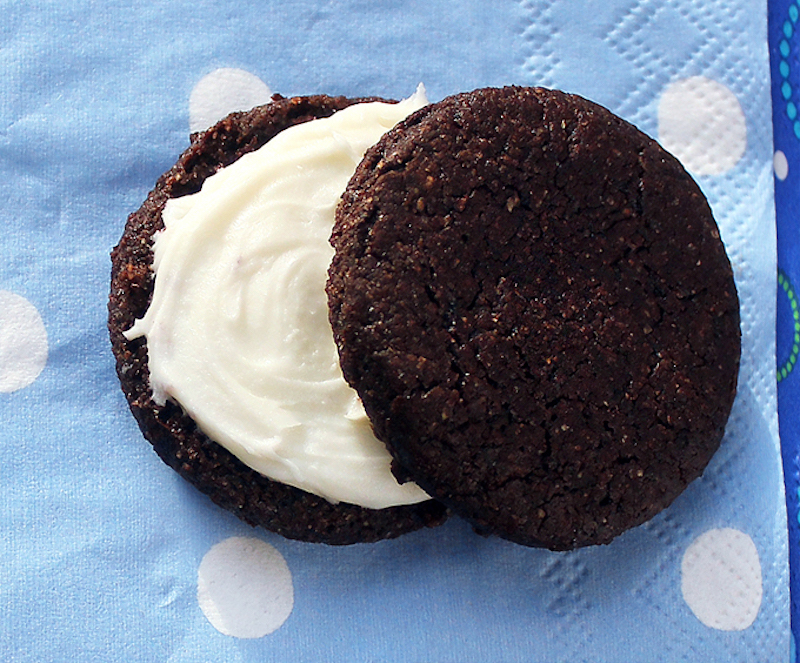 Don’t pass over this recipe because of the “healthy” qualifier—it’s only there to say that the ingredients don’t call for any of the artificial flavors or palm oil found in the original Oreo cookie. There is still plenty of sugar to make these cookies nearly as addictive as their muse. We love slathering peanut butter on these treats (a trick we learned from The Parent Trap decades ago—thank you, Lindsay Lohan).
Get the recipe 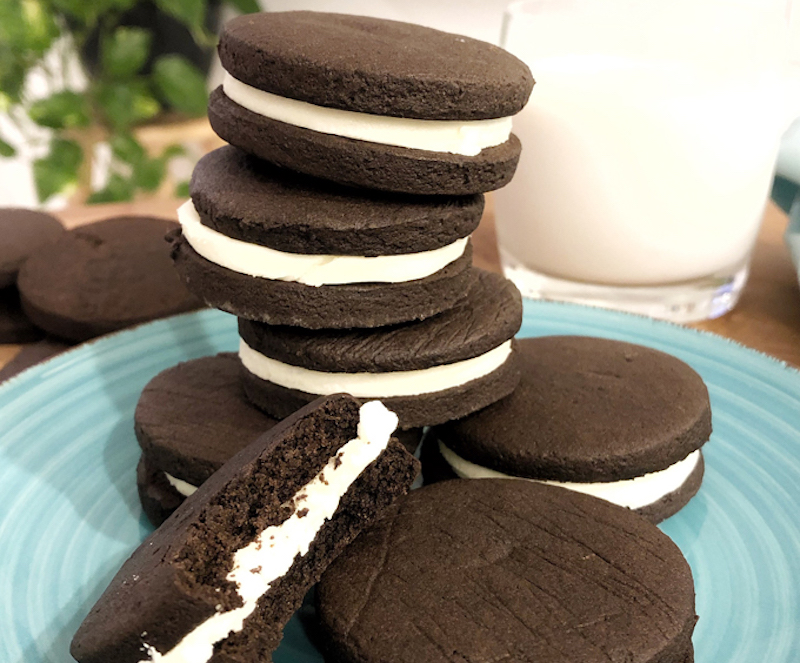 The beauty of making your own vegan Oreos is that you control the thickness of the cookie and the filling. Want extra cream? Slather it on? Love a cakier cookie? Make them thicker and bake for a minute longer. You can also use a large cookie cutter and make super-sized Oreos. Because who doesn’t love a giant, five-inch-wide cookie?
Get the recipe 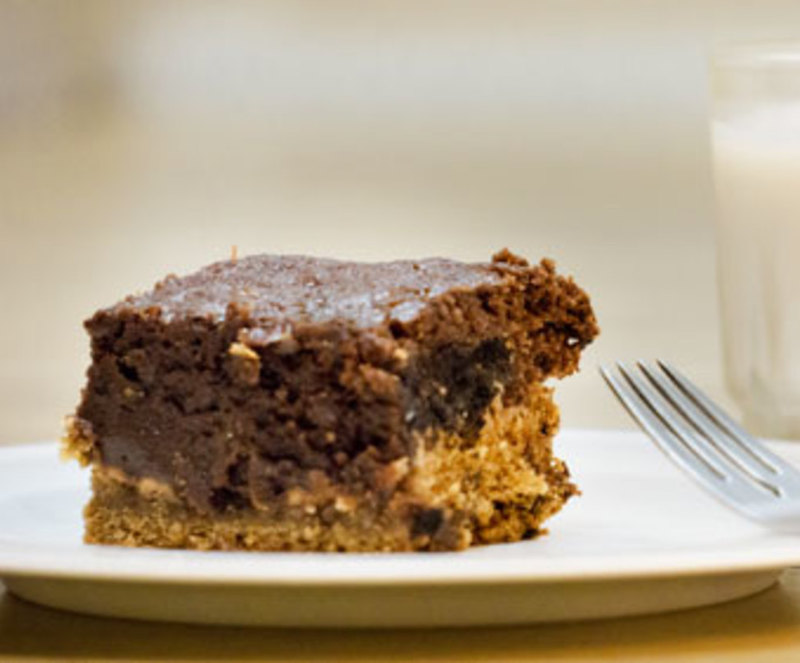 Tag “Oreo” onto any dessert and it becomes at least 50-percent more appealing. That’s a fact we have no data to support with, but the anecdotal evidence is strong. These triple-layer brownie bars feature a gooey chocolate chip cookie base, an Oreo and peanut butter middle, and a fudgy brownie top layer. They are all you need for any celebration, breakup, or situation calling for a major dopamine hit.
Get the recipe 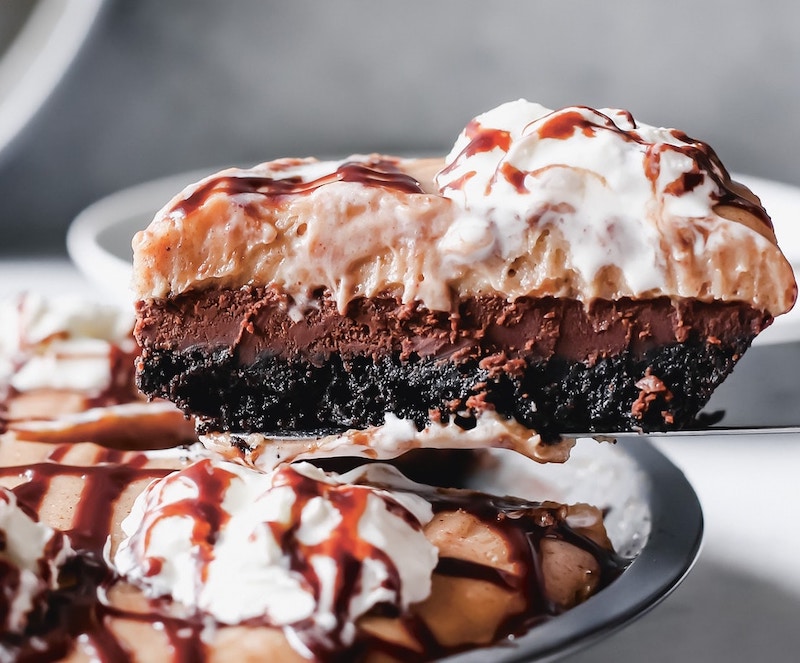 Pre-made Oreo crusts are naturally vegan, but it’s not hard to make your own. In fact, it can let out a bit of pent-up aggression. Simply smash Oreo cookies into powder then mix with melted vegan butter or coconut oil. Press the mixture into a pie pan, bake it off, then fill with this decadent chocolate almond butter mixture. The result is a cross between super-indulgent cheesecake, almond butter filling, and deep chocolate torte. In a word: heavenly.
Get the recipe 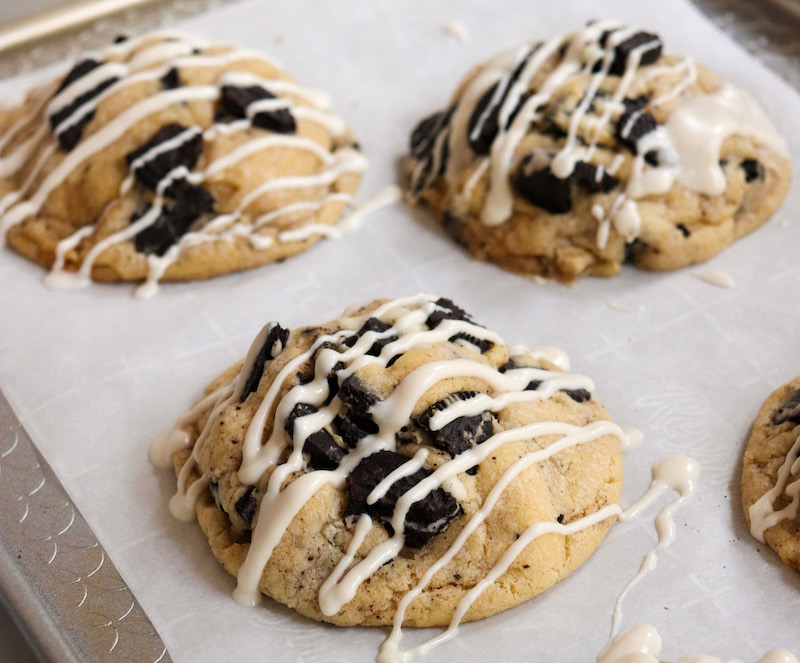 Only recently did we hear about the phenomenon of Crumbl Cookies—a national chain with a cult following. The shops don’t offer a vegan version, so we were kept in the dark until Mary-Kate of Mary-Kate’s Vegan Cakes started posting copycat renditions of the giant, soft-and crumbly-cookies. These Oreo-studded delights feature big chunks of Oreo cookies dispersed throughout the batter as well as baked into the topping. They’re the perfect mashup between gooey chocolate chip and crispy Oreo. Given their girth, one is certainly enough, but we’ve definitely polished off two in a single sitting.
Get the recipe