Planet-conscious eaters will be happy to know that drinking a cold Budweiser or Stella Artois and eating juicy vegan ribs are now not just the makings of a great Sunday afternoon but can help fight the climate crisis. That’s because AB InBev—the parent company behind some of the largest beer brands in the world—is in an interesting partnership with food-technology company Planetarians that turns its spent brewer’s yeast into vegan Planet Ribs and other ultra sustainable meat alternatives.

Using upcycled ingredients, Planet Ribs are made to be just as succulent and juicy as their animal-based counterparts but with a much lighter footprint and half of the calories. The ribs come in a ready-to-reheat format so there is no need to bake them for hours and are priced comparably to animal ribs at $4.99 for a 16-ounce rack. Planetarians has been sampling these ribs aboard a food truck, where they are served as part of plates with coleslaw, chips, and pickles, along with a “rib dog,” a hot dog stuffed with the vegan ribs. 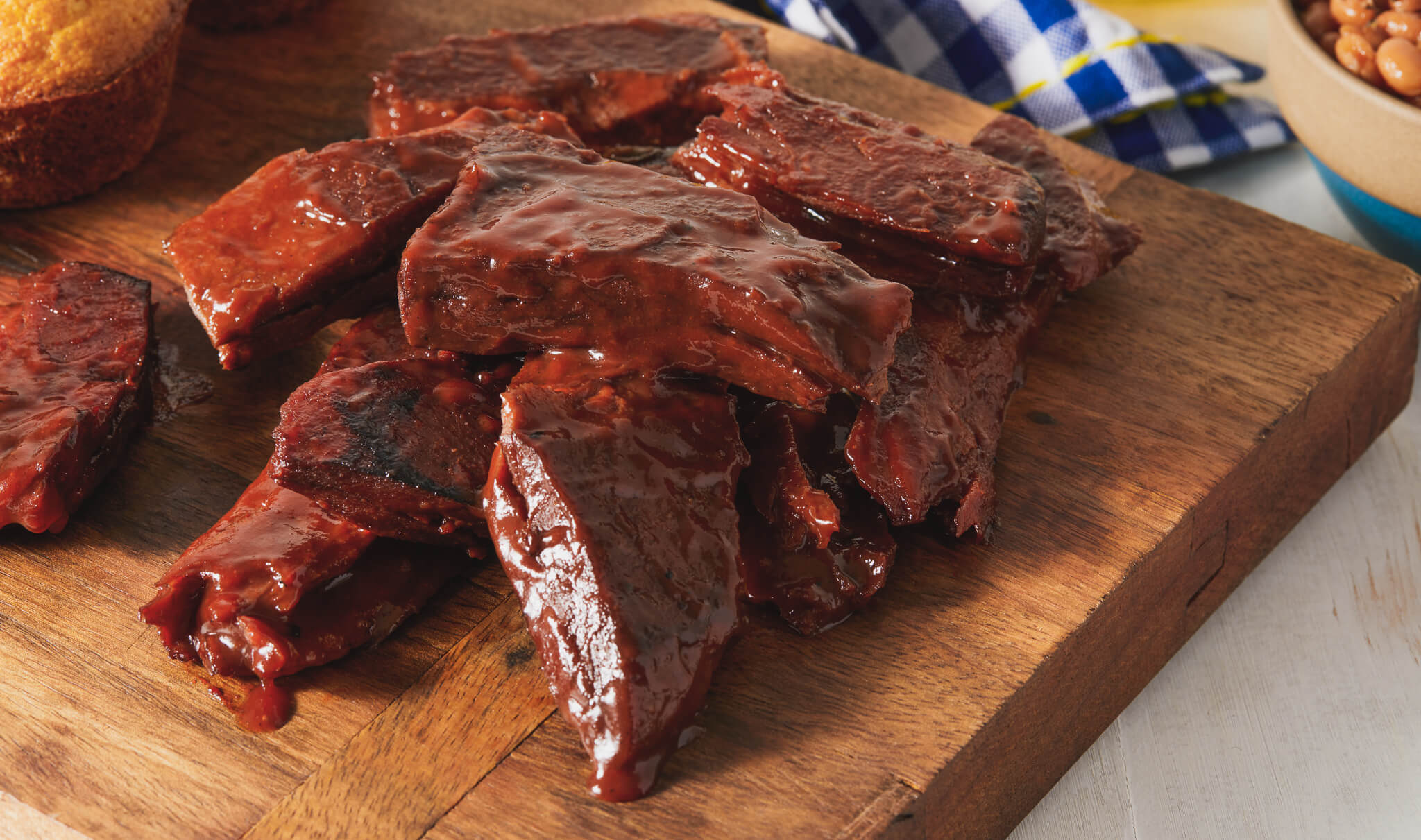 The company is foremost a technology company and the ribs are made from a marinated meat block that founder Aleh Manchuliantsau says is similar to tofu but with a fibrous meaty texture and flavor. The company typically sells its meat base through the business-to-business (B2B) channel but made a separate, consumer-ready Planet Ribs brand to test its market viability and within the first month, Planterians received 1,722 orders organically.

“We decided ribs would be a very good way to showcase the capabilities of our meat blocks,” Manchuliantsau told VegNews. “You have a plant-based protein and a succulent mouthfeel the same as you would expect from ribs and you do not waste much time on cooking.”

While Manchuliantsau is open to working with others to commercialize the vegan ribs if there is interest, the climate-focused innovator is working to disrupt the food system with his plant-based meats on a bigger scale. 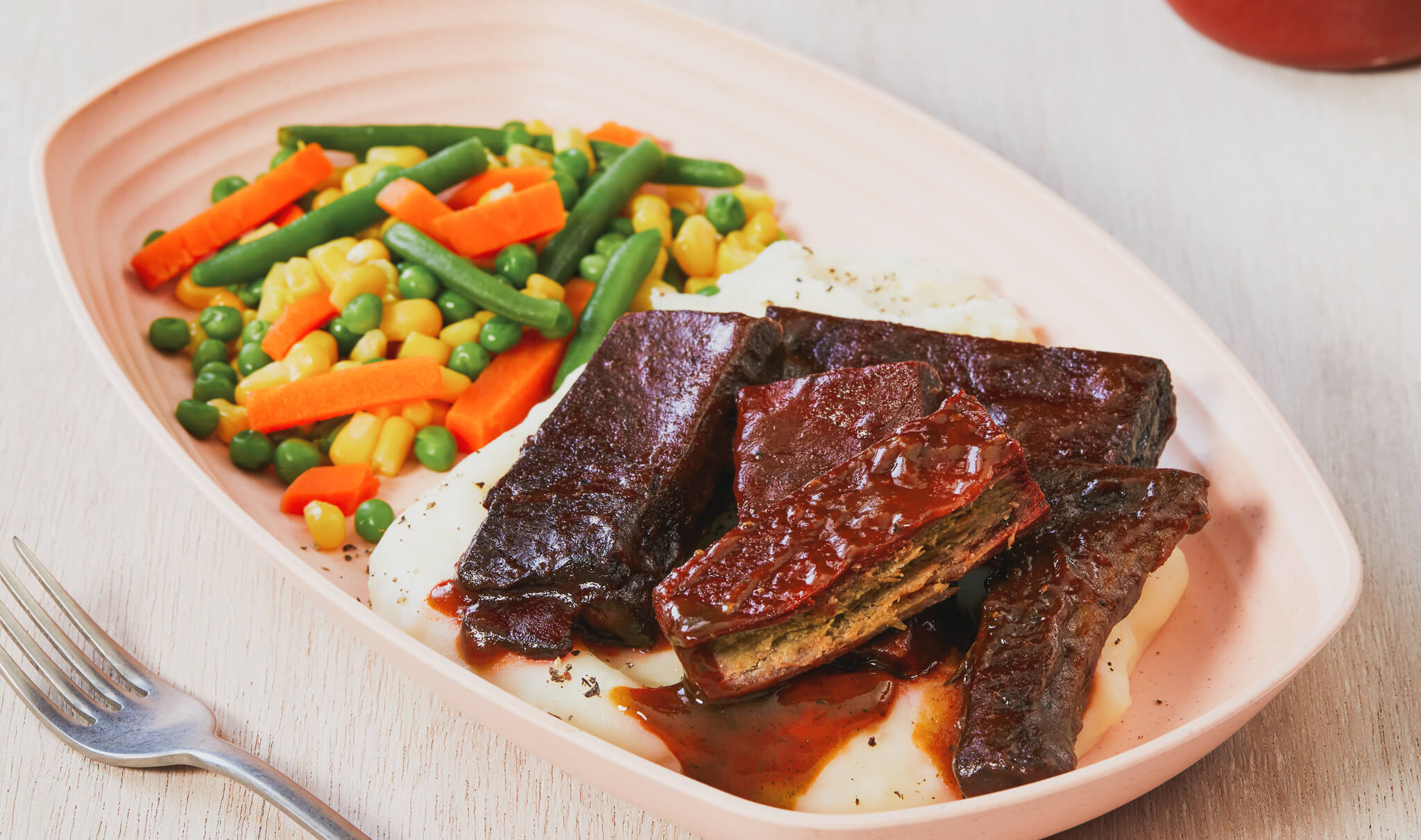 Born in the former USSR, Manchuliantsau was inspired to create Planetarians after his travels led him to witness first-hand that countries around the world were not taking the climate crisis seriously. He also wanted to set a good example for his three teenage sons. “If you want to change something, we need to do it on our own,” he said. “I was inspired to do something good for the planet.”

He began thinking about how to create a plant-based meat alternative that would hit on three benefits: planet-friendly, people-friendly, and profitable for everyone who is involved. Since 2015, Manchuliantsau and his team at Planetarians have explored the world of plant-based meat to unlock better, more affordable, healthier, and environmentally friendlier approaches to making meat. 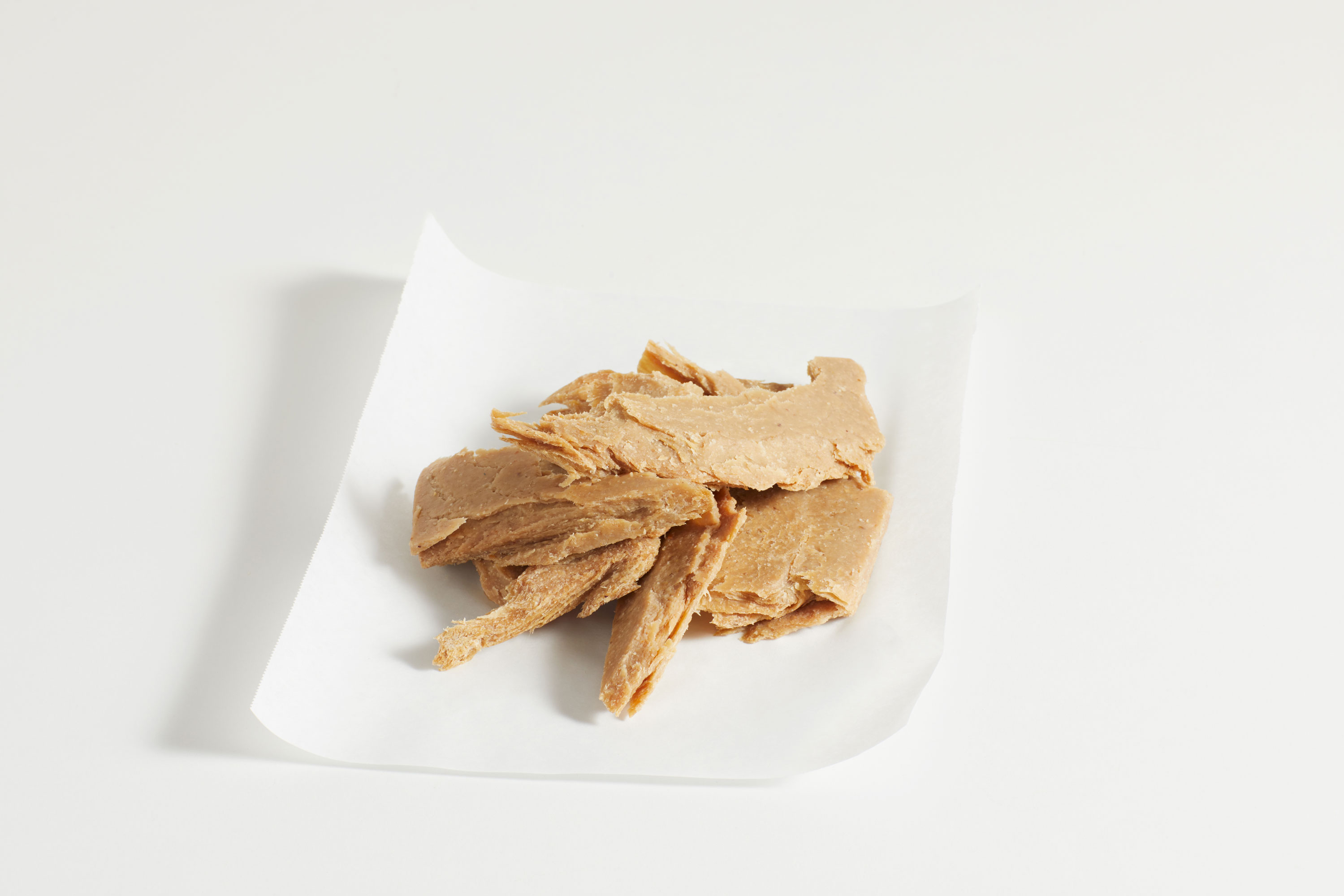 Making meat from isolated plant-based proteins such as peas requires the addition of many secondary ingredients that act as maskers, blockers, flavorings, or colorants, which Manchuliantsau explains account for approximately 80 percent of the cost. “This is why plant-based meats are so expensive,” he said. On the other hand, using precision fermentation—while favorable in umami taste and shorter ingredient list—can be expensive on the manufacturing side.

In 2020, the Planterians team arrived at the idea of extracting the benefits of fermentation by sourcing an already fermented product: spent brewer’s yeast. When you ferment beer, the target product is the alcohol not the yeast and so it’s “a pain point” for companies such as AB InBev to dispose of it. “But you cannot dump it into the sewage because it’s bioactive but that yeast is a source of fermented protein,” Manchuliantsau said. “That yeast is what we needed.”

In the summer of 2021, Planetarians approached AB InBev, which was eager to upcycle its spent brewer’s yeast into something with such potential. The beer giant agreed to give Planetarians its yeast under the condition that it could invest in the company, which AB InBev did in December 2021.

“Using their money, we built our facility and that is where we produce our ribs,” Manchuliantsau said. “Now they can say that all their beers are sustainable. It’s a zero-waste process.” 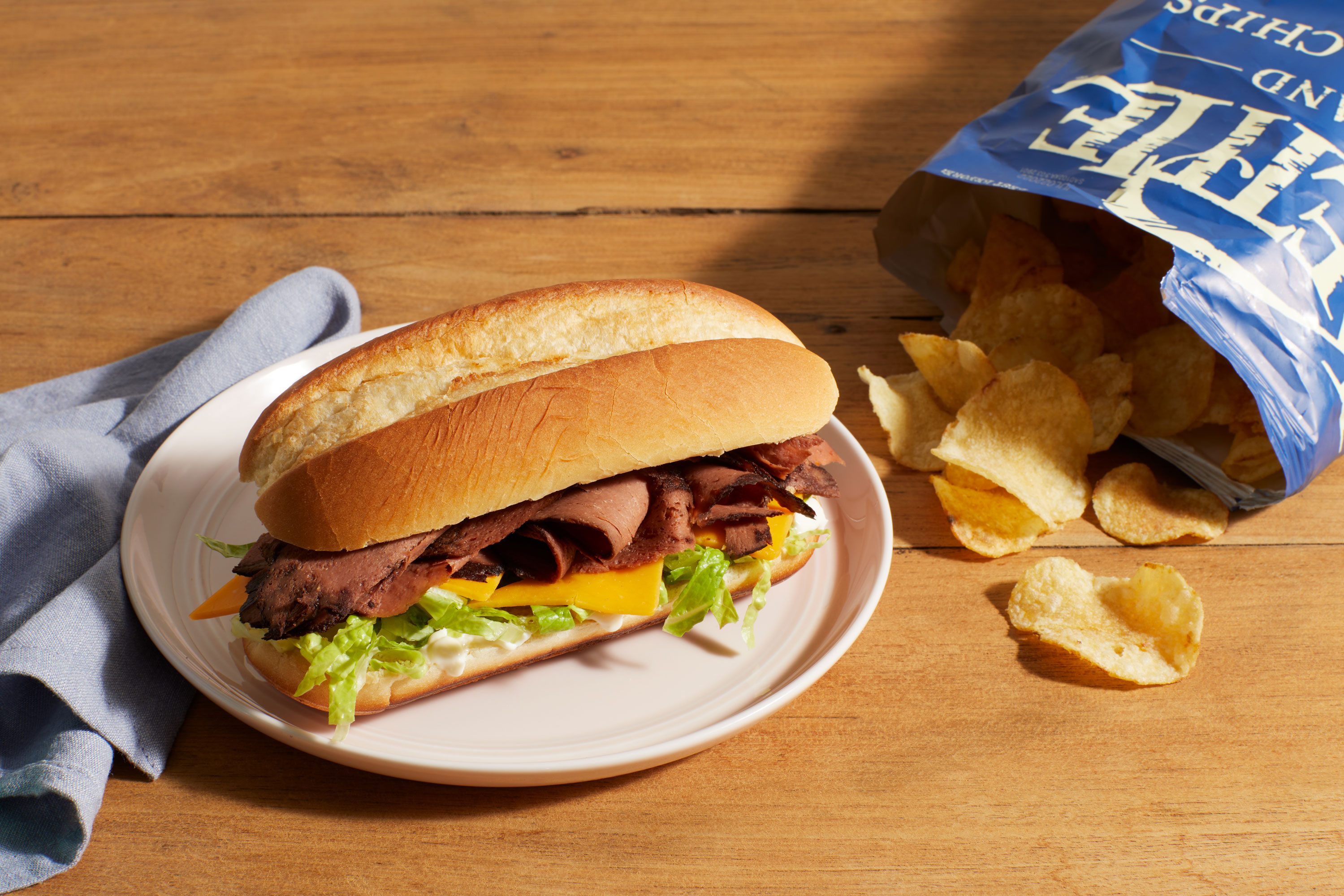 Planetarians further expands the sustainability of its plant-based meat by using soybean oilcake, the leftover mass from the oil industry. When combined, the resulting vegan meat base is incredibly versatile and can be used to create various applications. In addition to ribs, Planetarians can make plant-based deli slices such as roast beef, meatless chicken wings, sausages, ground meat, and more. All of these products are substantially more environmentally friendly than both animal-derived beef and popular plant-based meats, with a carbon footprint that is 25 times and two times lower, respectively, according to a Life Cycle Assessment (LCA) conducted by a group of economists at IAMECON.

After conducting consumer testing that yielded favorable results, Planetarians is now working with a large consumer packaged goods (CPG) brand in food service to bring its plant-based meat to market through their brands and their restaurants. 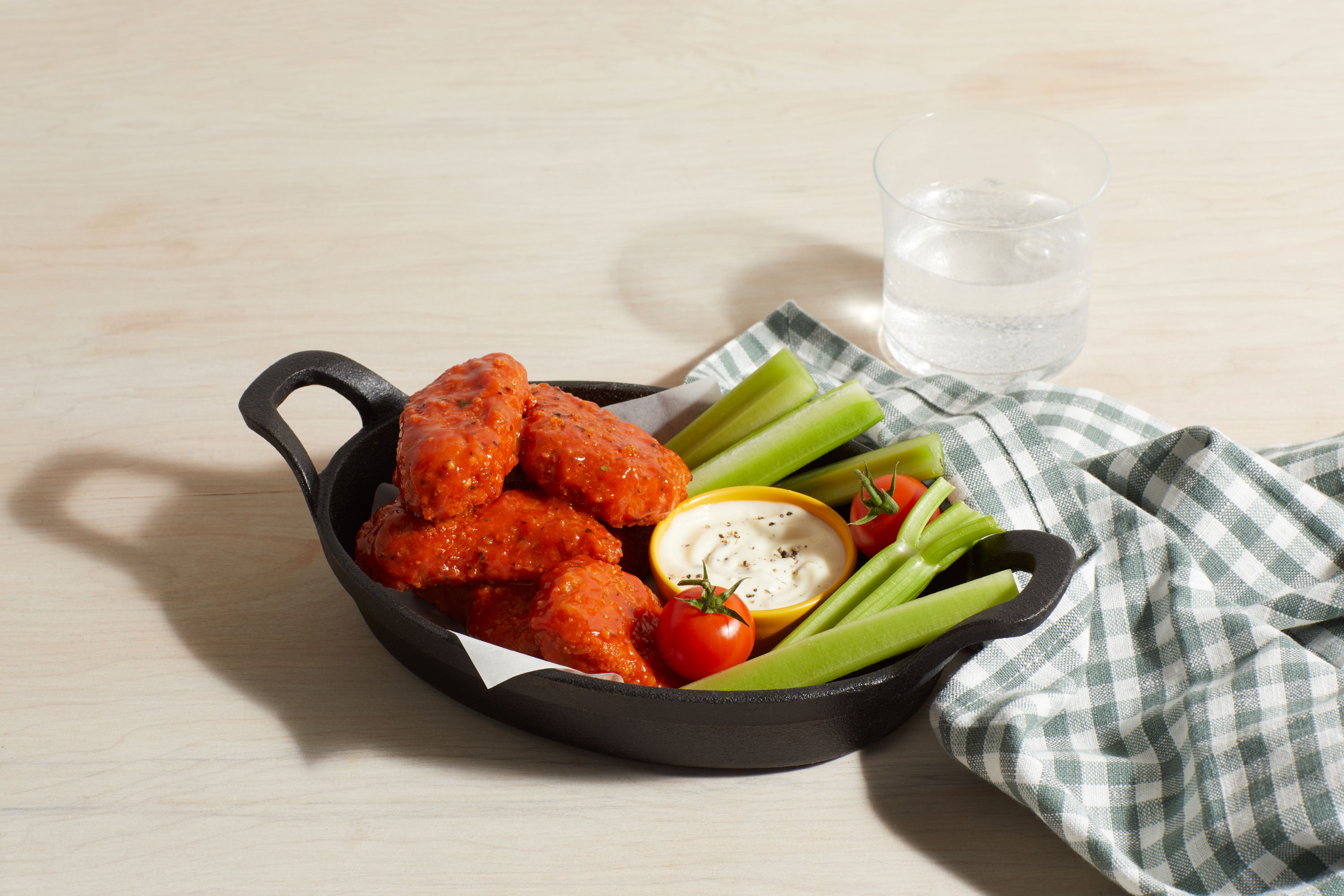 As Manchuliantsau pointed out, turning beer waste into vegan meat and milk products is a way for alcohol companies to be more sustainable. AB InBev’s largest competitor, Molson Coors, recently launched Golden Milk, vegan milk made from leftover barley in Golden, CO. AB InBev’s involvement with Planetarians is also not the first step the company has taken to find new uses for its byproducts. Last year, AB InBev announced its partnership with EverGrain, which is working to extract proteins and fibers from brewing grains to create nutrient-rich ingredients that have applications in a variety of products, including vegan barley-based milk. Through its ZX Ventures innovations arm, the beer giant is also working with THE EVERY COMPANY to help it scale its vegan egg whites—made using precision fermentation.

Its partnership with Planetarians is the latest way AB InBev is working to support innovation in the plant-based alternatives space, while at the same time reducing its own environmental footprint. “ZX Ventures and AB InBev are committed to using our scale and expertise to support sustainable food system transformation. We’re excited to support new ways to bring circular solutions to the center of the plate through upcycled ingredients and alternative protein innovation,” Bernardo Novick, Head of ZX Ventures, told VegNews in an emailed statement. “Using our brewer’s spent yeast as a key input to their resource-efficient process, Planetarians is producing plant-based protein that tastes delicious.” 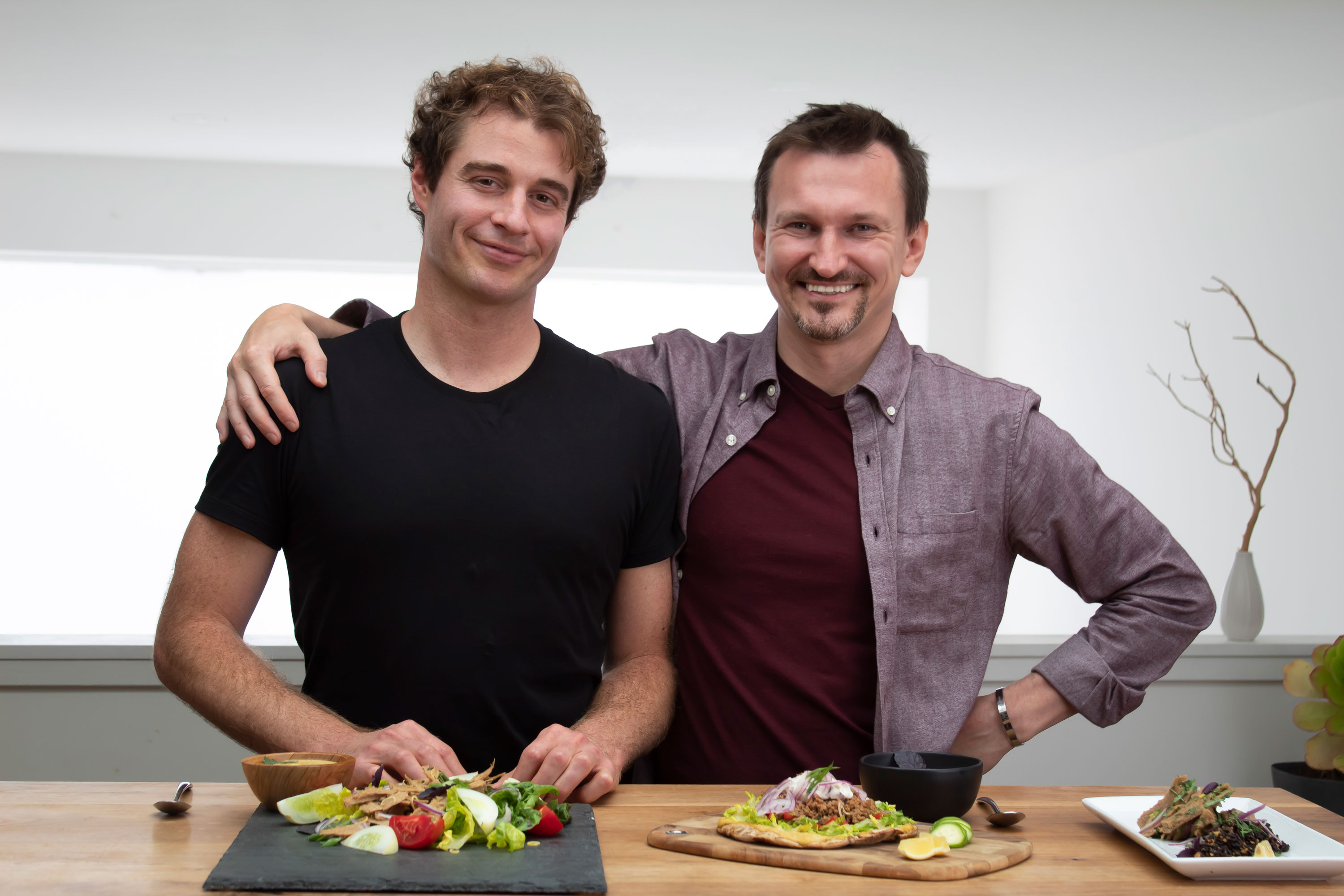 Manchuliantsau, a flexitarian himself, sees Planetarians and companies like his as innovators in a space that will soon produce the most common form of protein. When asked to imagine the supermarket meat case of the future, he said, “Have a look at what’s happened with the cigarette market. We still have cigar shops as premium versions but with cigarettes, they somewhat disappeared. Electronic cigarettes did not substitute that much. In 10 years, we will have our animal-based products occupy that premium spot for special occasions. While on a daily basis, we will be consuming better [plant-based] proteins for ourselves.”