It seems that every week in the world of vegan food news is more exciting than the last and this week is no exception. Trader Joe’s continues to impress with its selection of vegan dips and this week’s addition of dairy-free Buffalo dip does not disappoint. A new spring menu of indulgent vegan cinnamon rolls has sprung at North American chain Cinnaholic. And Gooey Snacks is bringing its chocolate hazelnut spread (read: vegan Nutella) to 2,000 Kroger-owned stores. Read on for more.

Trader Joe’s has always been a go-to favorite for vegan products but in recent years, the grocery chain has really stepped up its plant-based game with rapid-fire launches of everything from meatless burgers to dairy-free cheeses to tiny, handheld vegan ice cream cones. And when it comes to dips, TJs is keeping the good snacking times rolling with the recent launch of a vegan Buffalo dip that’s creamy, spicy, and perfect for a party tray. 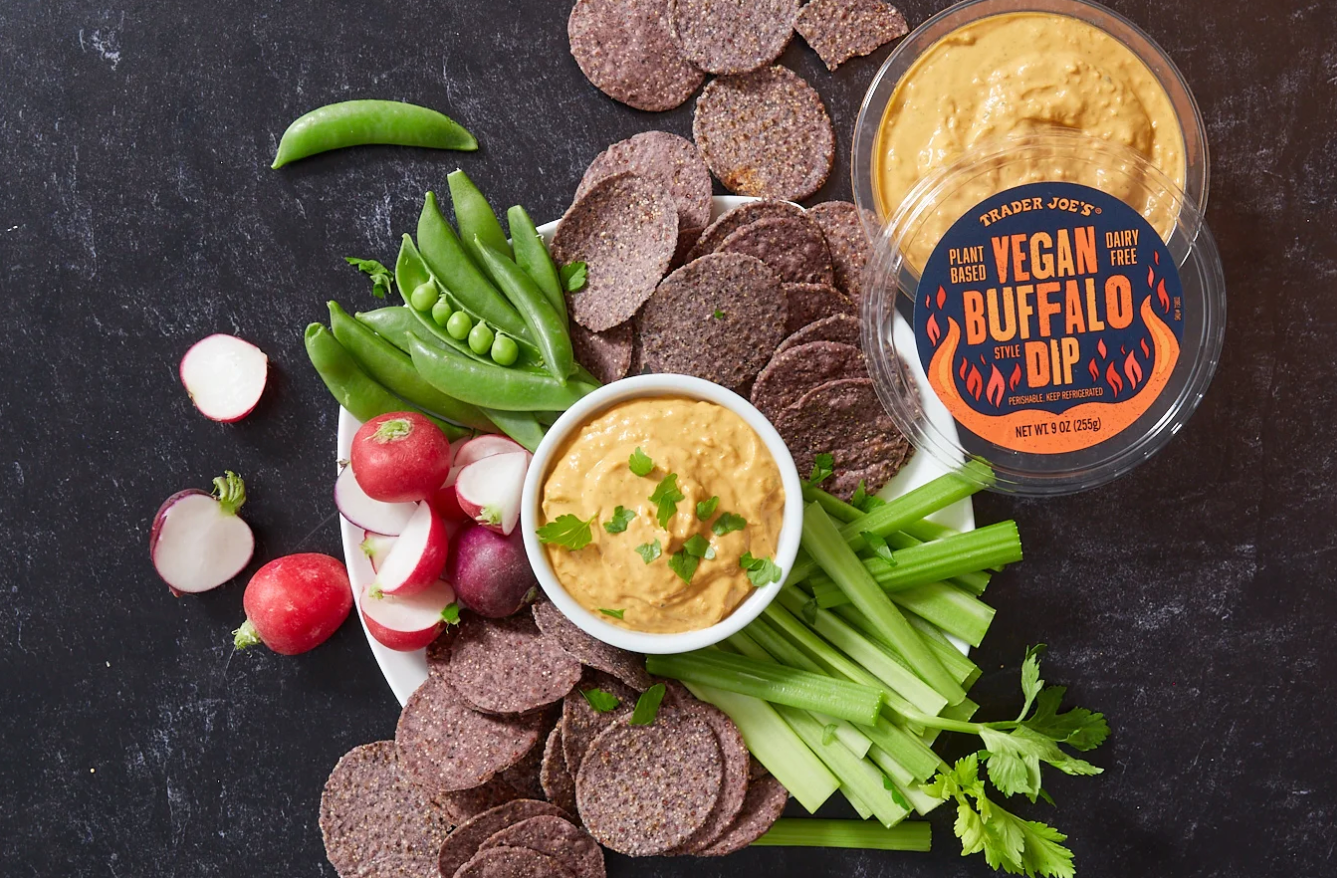 “With an ingredient list laden with vegetables, like cauliflower, red peppers, and carrots, it creates a marvelous canvas for that slow-building, infamous Buffalo, cayenne kick that everyone, not just meat eaters, can enjoy,” Trader Joe’s describes its new dip. “Tempered by lime juice—not a drop of dairy in sight—to gently cool your taste buds, each mouthful is a roller coaster of thrilling spice, followed by a gentle, vegan-friendly cooling sensation that inevitably keeps you going back for more.”

We’re not sure what a “vegan-friendly cooling sensation” is but the new Buffalo dip is in good company in TJ’s refrigerated aisle where the chain’s vegan tzatziki and caramelized onion dips have been hanging out since they launched last year.

The cheeseball is an iconic snack that just got a dairy-free makeover thanks to Outstanding Foods. The vegan snack brand—which was crafted by Dave Anderson, the executive chef behind the Beyond Burger—is releasing four flavors of vegan cheeseballs: Chedda, Jalapeño Chedda, Garlic Parmesan, and Bacon Chedda. 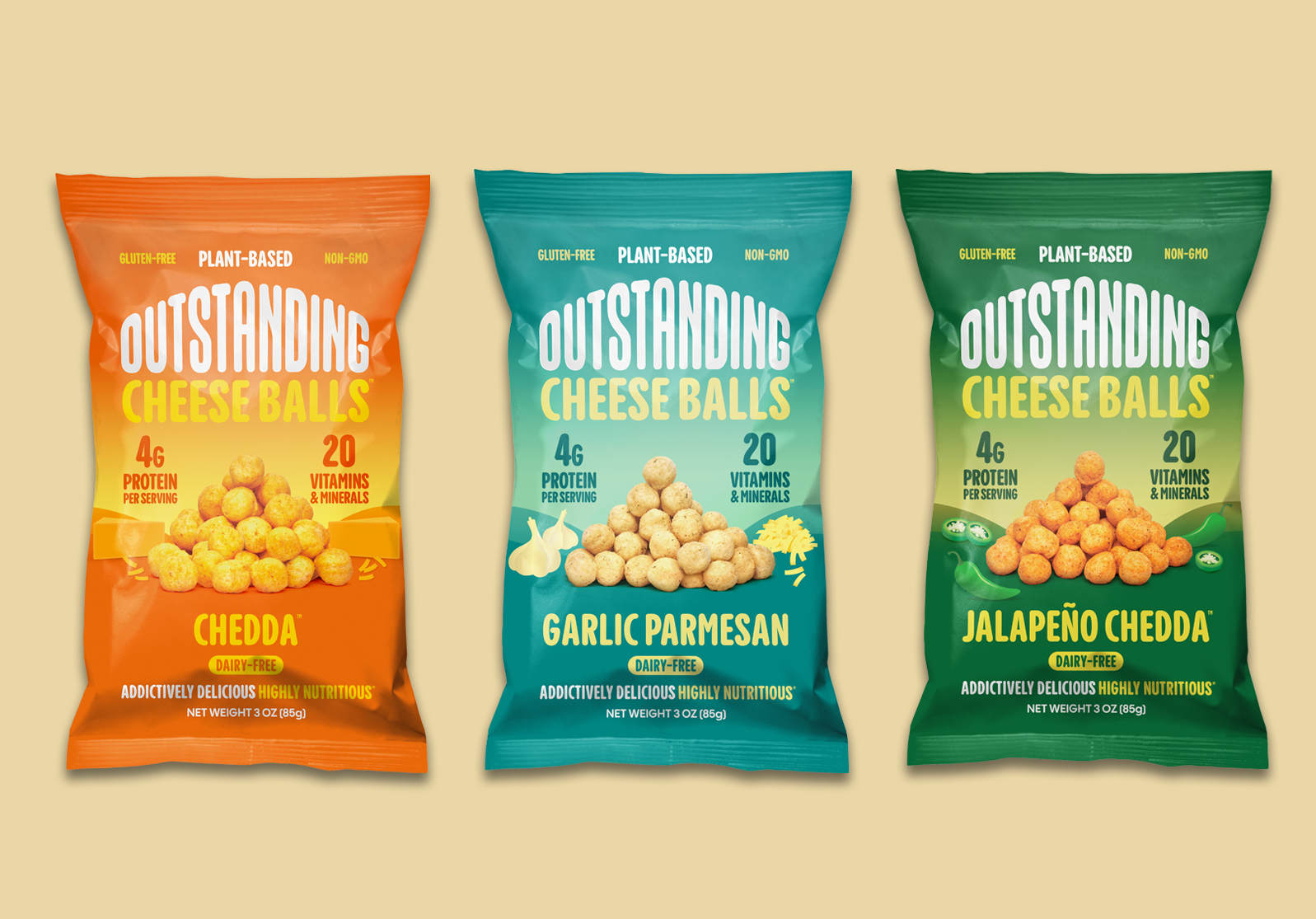 In addition to being vegan, these cheeseballs are different from their dairy predecessors as they are not devoid of nutrition and feature 20 vitamins and minerals, including zinc, B12, D, E, B6, and A, along with four grams of protein per serving. The new cheeseballs are expected to hit stores in April.

Outstanding Foods is backed by celebrity investors such as Snoop Dogg and Daniella Monet, and also offers plant-based pork rinds, puffs, and bacon-flavored seasonings, all made with the mission of reimagining the snack industry to better serve people, animals, and the planet. 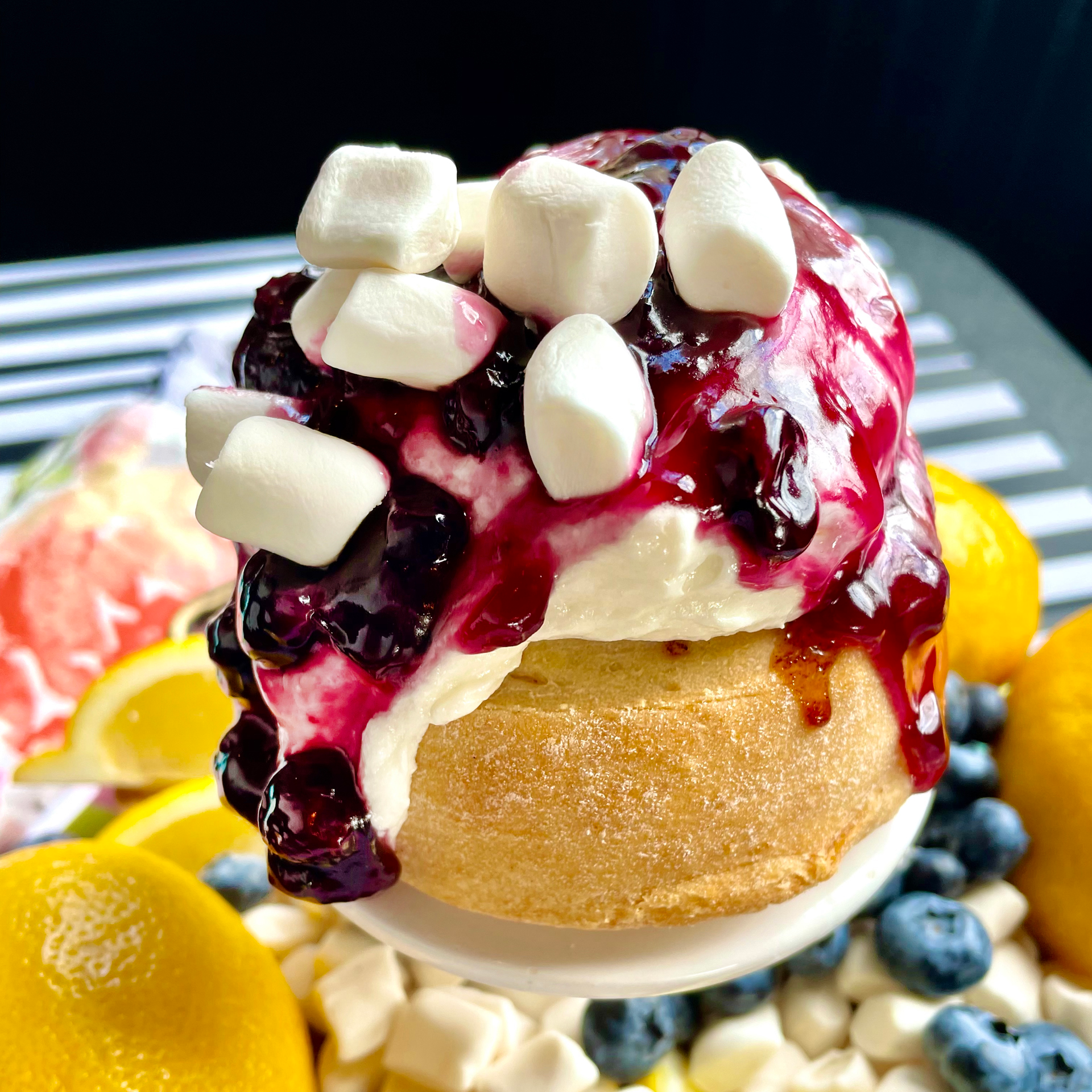 “At Cinnaholic, we are always changing with the seasons so this spring we are excited to bring new flavors and treats for our customers,” Leanne Cavallaro, Vice President of Operations at Cinnaholic, said in a statement. “Not only are we looking forward to releasing our spring rolls, but we can’t wait for customers to try our seasonal dessert option, the Magic Cookie Bar. Our limited-time menu items are always loved by our fans, so make sure that you enjoy the treats while they are available.”

All of Cinnaholic’s spring menu items are available in-store, online, and through third-party delivery platforms.

Van Leeuwen’s dairy-free fave is back

Van Leeuwen is also celebrating spring with dairy-free goodness. The ice cream brand is bringing back a fan-favorite in honor of Earth Day (April 22) and it’s available at its scoop shops from now until June 2 or while supplies last. The Planet Earth flavor gets its aquamarine hue from blue spirulina that is blended into almond ice cream and dotted with pieces of matcha green tea cake. The flavor is also rolling out to Walmart stores in pint form and is expected to hit 3,500 locations by April 5 for a 10-week rotation. 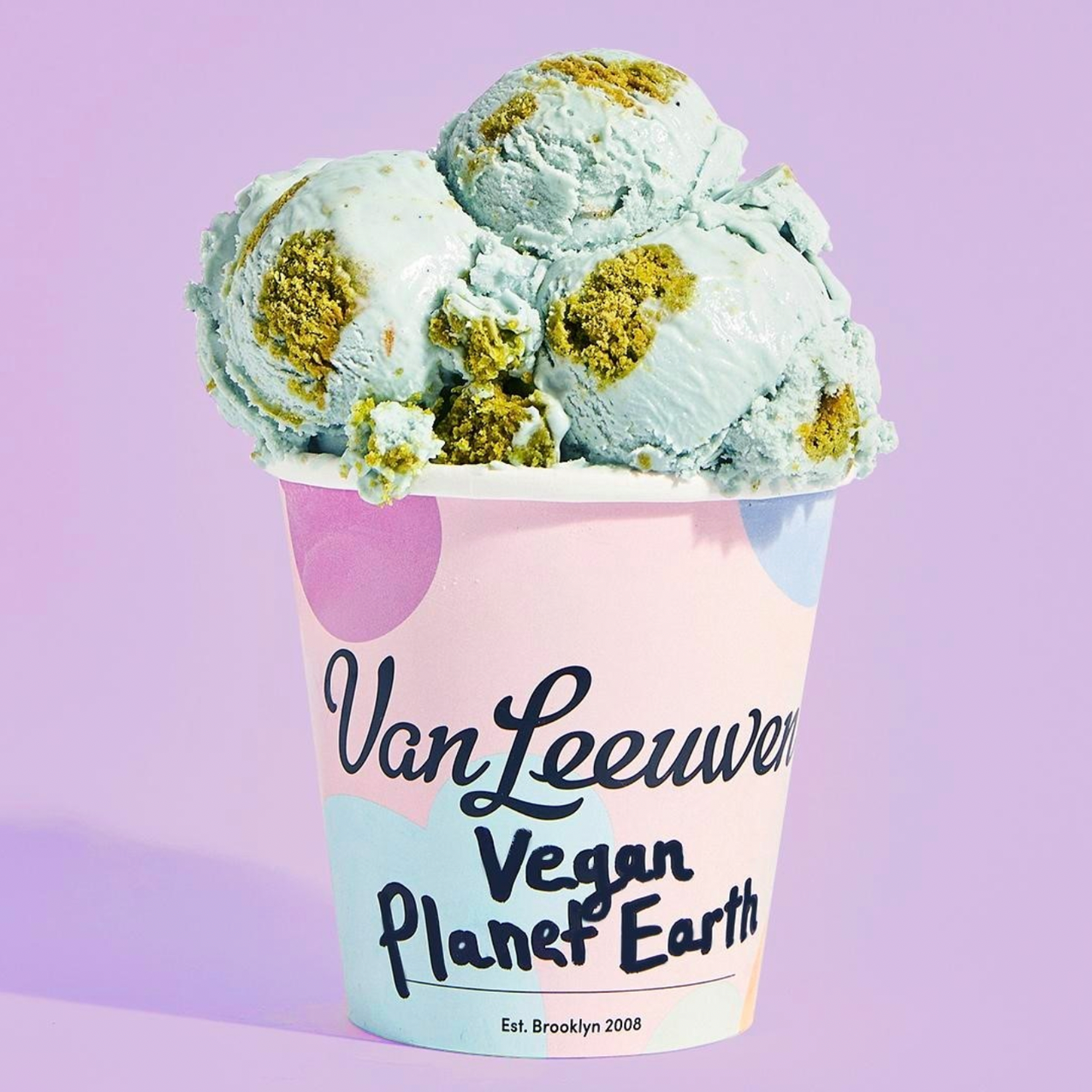 For more sweet news, a new vegan Nutella-like spread is coming to 2,000 Kroger locations. The palm oil-free spread is a carefully crafted blend of chocolate and hazelnut made by Gooey Snacks, a brand borne out of modern food company Starday. Launched in 2021, the company analyzes thousands of food industry data points to determine unmet needs and, it turns out, vegan chocolate hazelnut spread was one of them (we agree!). 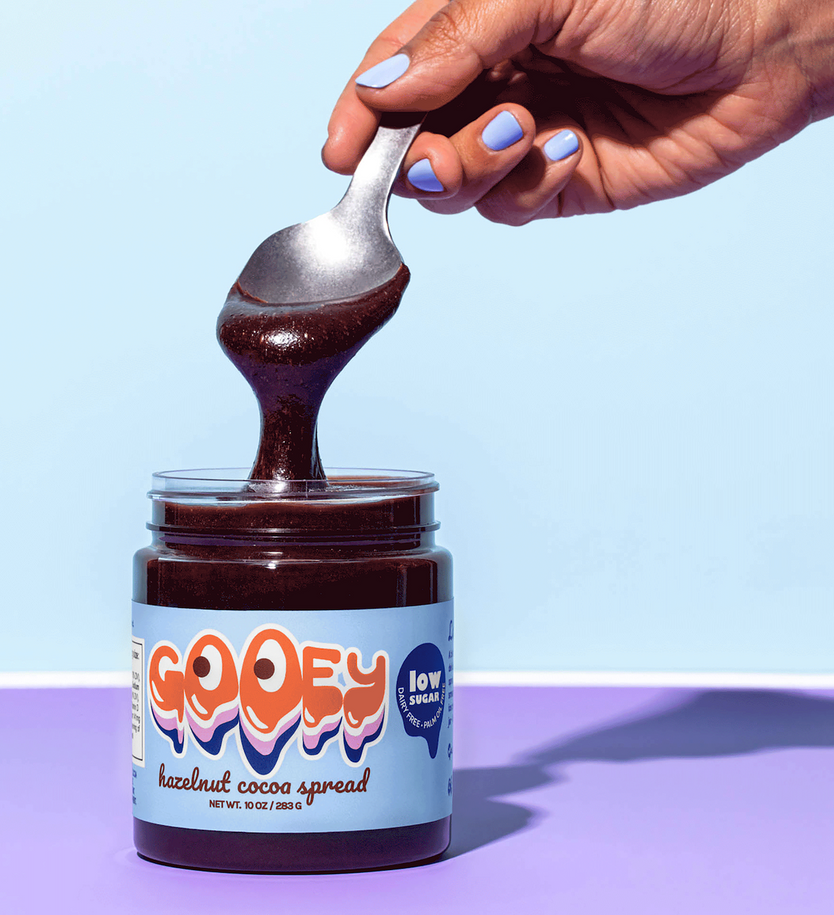 “Our large-scale partnership with Kroger, the nation’s largest grocery chain, marks a major milestone for Starday. This rollout comes approximately six months after our direct-to-consumer launch, making Gooey one of the fastest ever digital-first brands to hit national retail shelves. We’re thrilled to be partnering with Kroger and honored by their validation of our data-driven approach to creating and scaling food brands,” Caroline McCarthy, Co-founder and Vice President of Growth at Starday, said in a statement. “But more importantly, this partnership means Gooey is more accessible to more people. The key for us is to meet people where they are—and for a lot of people, that’s at a grocery store.”

Give us a minute to grab a spoon and we’ll see you at the grocery store, Gooey.

For the latest vegan news, read:
This New Vegan Chicken Is Made to Rival Popeyes
The World’s First Dairy-Free Buttermilk Is Made From Ancient Grains
Chantal Guillon’s New Vegan Macarons Are Made With Chicken-Free Eggs

The 25 Best Vegan Food Products You Can Find at Kroger

What’s Vegan at Trader Joe’s: The 9 Hot Products in February