Over the summer, McDonald’s ended the test of its McPlant burger before it ever got the chance to tempt customers with a nationwide launch. But that doesn’t necessarily mean that they’re gone forever. Luckily, vegan sandwiches at fast-food chains are no longer difficult to come by, but before Impossible Foods and Beyond Meat infiltrated drive-thru culture, plant-based restaurants were making their own super-stacked veggie burgers. The following 17 vegan burgers prove that meat-free joints do it best.

Craving a vegan Big Mac? These meat-free burgers do it better

Vegans and omnivores have raved over the Burger King Impossible Whopper and the Carl’s Jr. Beyond Famous Star. But as far as we’re concerned, vegan restaurants will always be the king of the hill. From Los Angeles to New York City, and to all of the local gems in between, these vegan handholds are putting the Big Mac to shame. 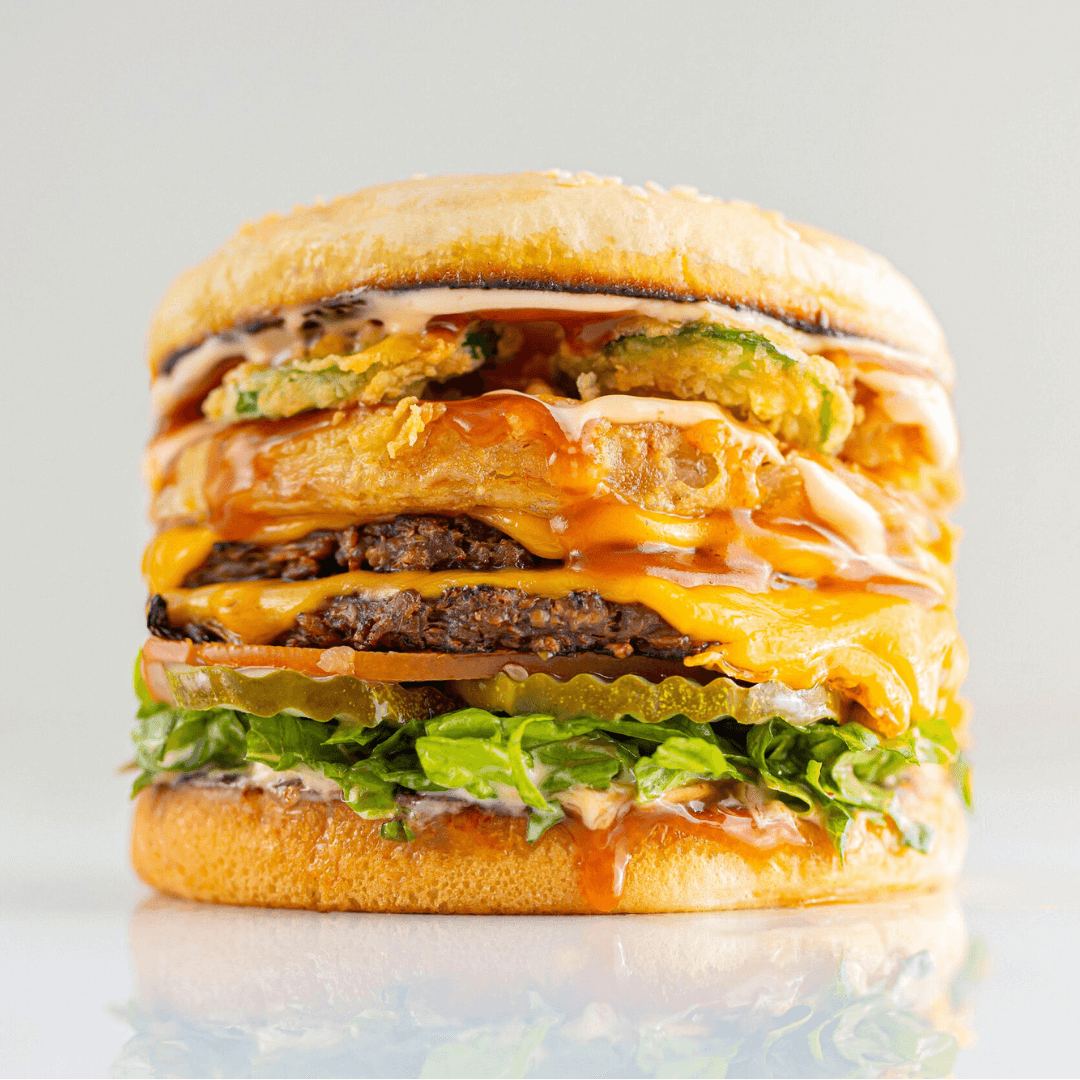 1 The Deluxe Vurger at Vurger Guyz in Los Angeles, CA 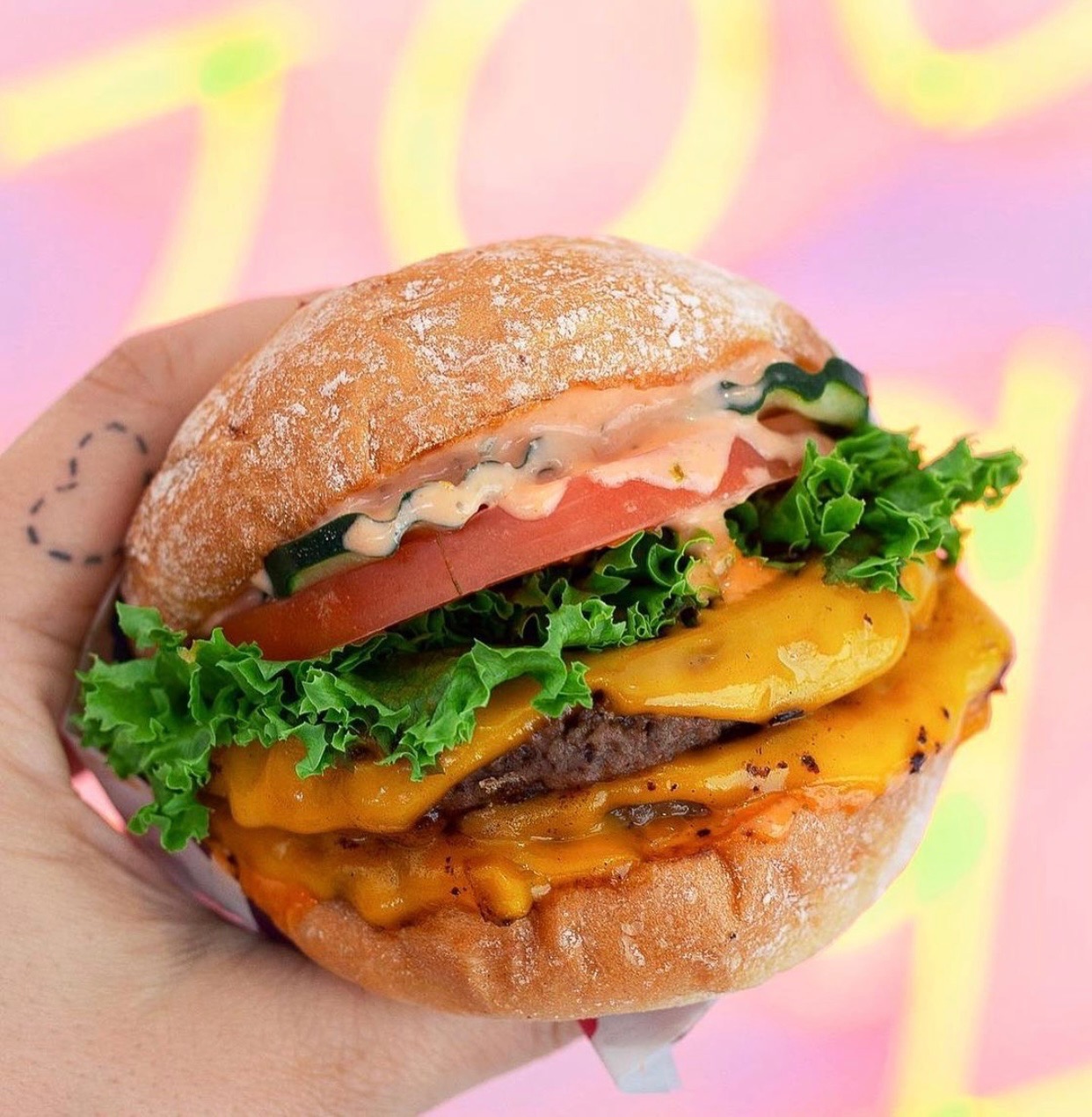 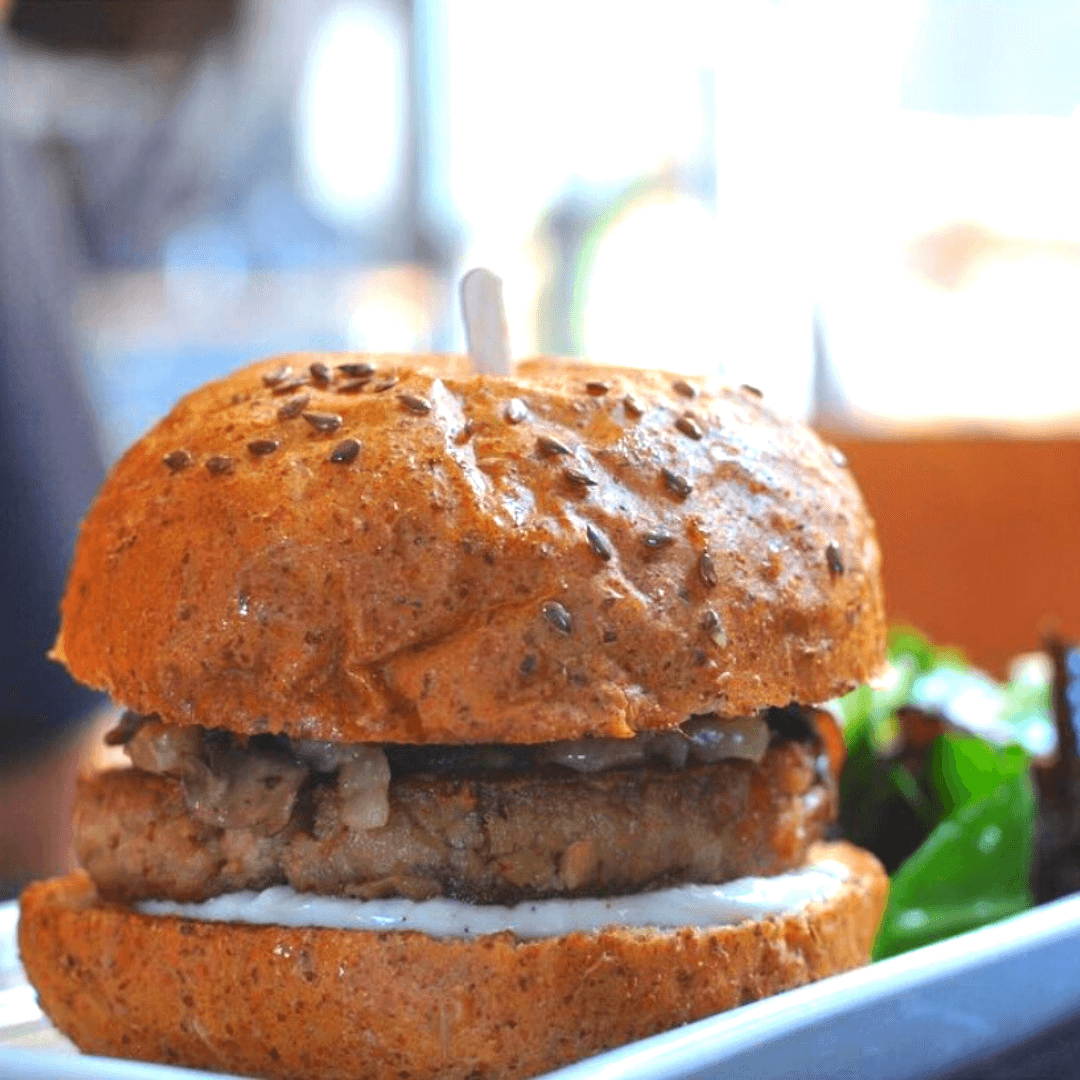 In full transparency, the size of this burger is a bit underwhelming. However, for what it lacks in volume, it makes up in flavor. Made with a beefy vegetable-based patty and topped with caramelized onions, sauteéd mushrooms, and truffle aioli on a flax seed bun, this handheld from Freesoulcaffe is the most gourmet burger on our list.
Learn More here 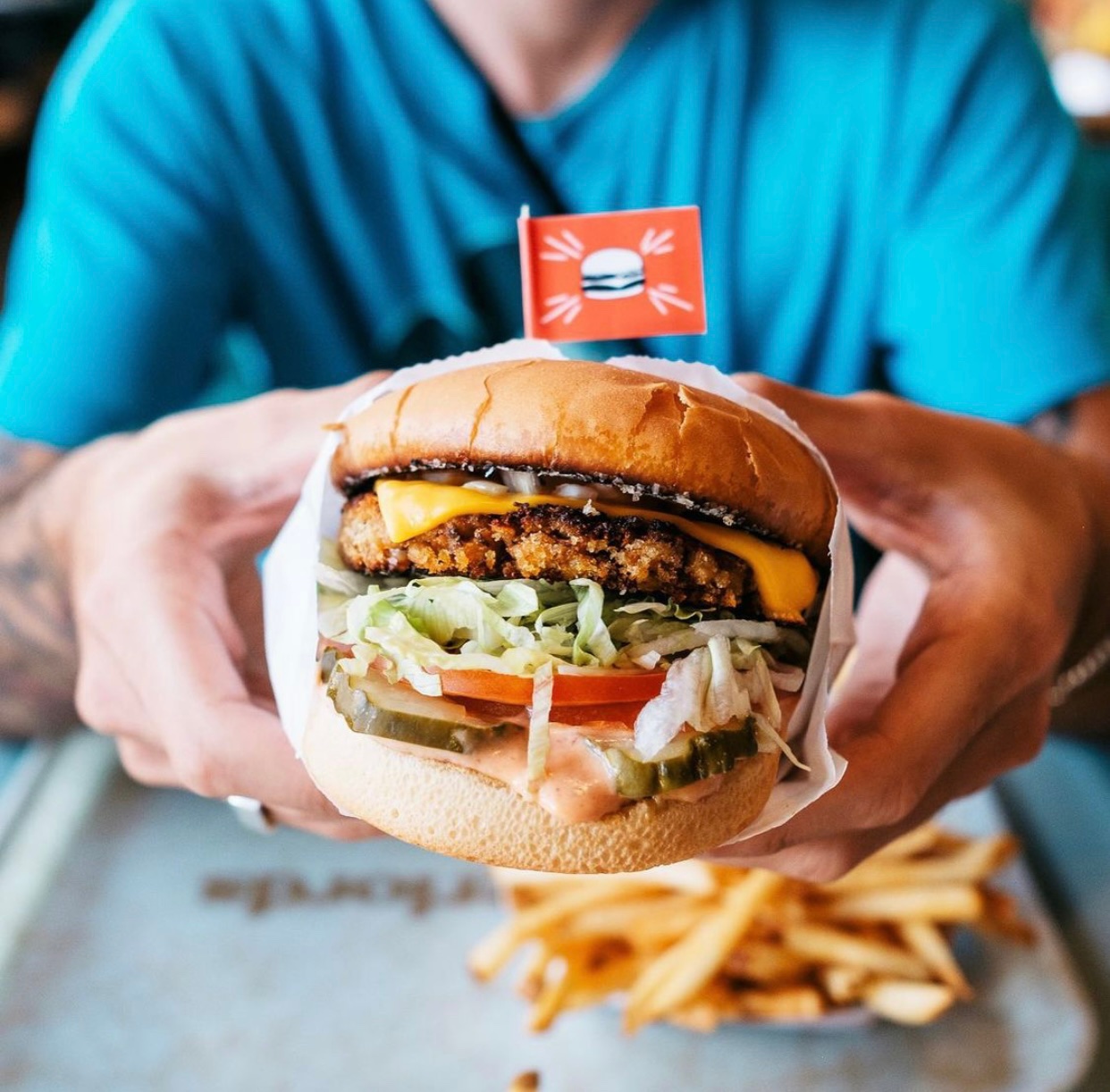 This veg-friendly mainstay’s newly revamped—and now entirely plant-based—menu is cause for celebration.

Opt for the signature Burgerlords Cheeseburger featuring a housemade patty and topped with Follow Your Heart cheese, lettuce, tomato, onion, pickles, and Burgerlords’ signature 2,000 Island sauce. Pair your handheld with a side of animal-style Lord of the Fries and a tahini milkshake for true bliss.
Learn More here 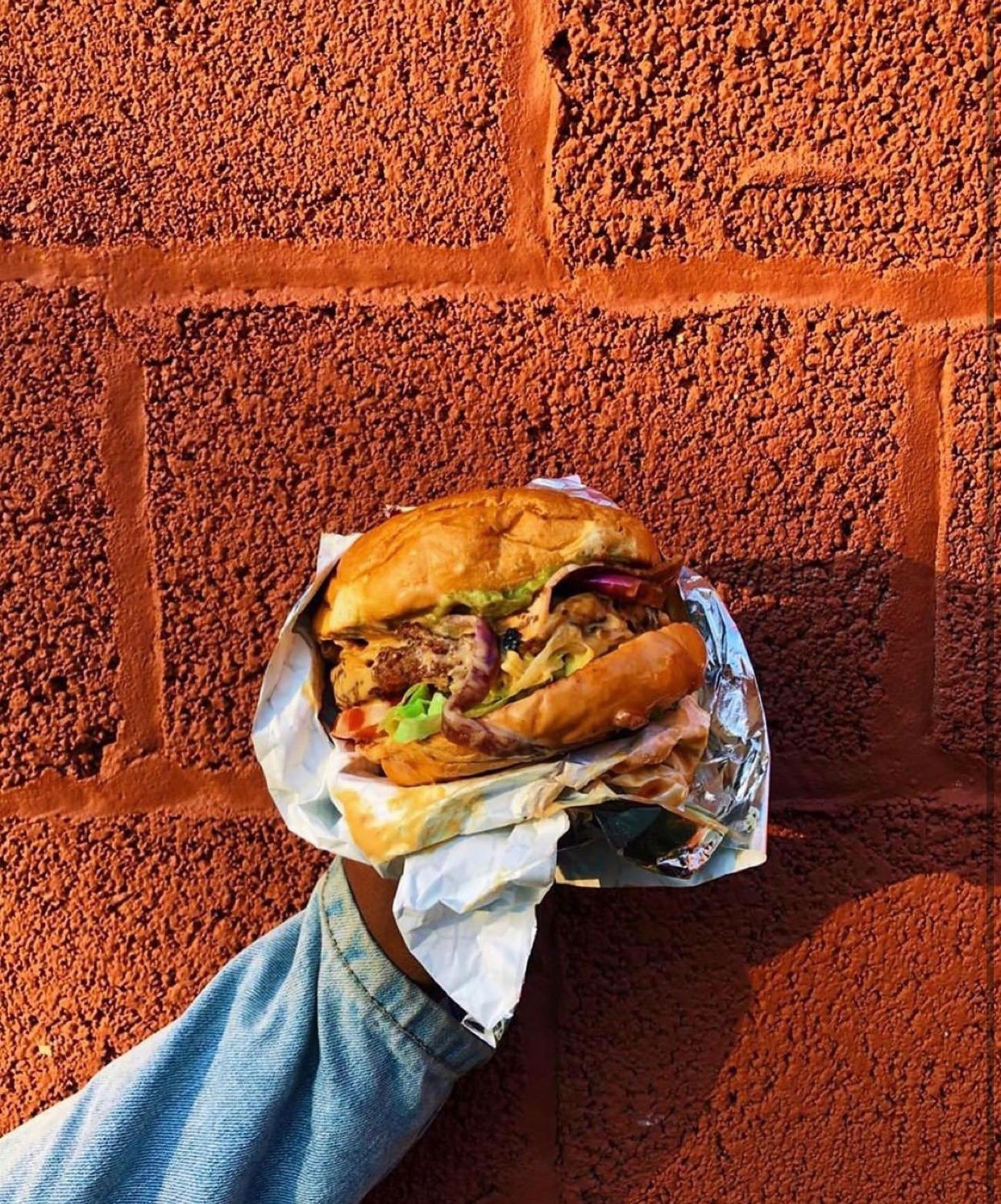 What began as a local food truck has become a popular vegan micro-chain in Georgia and beyond. 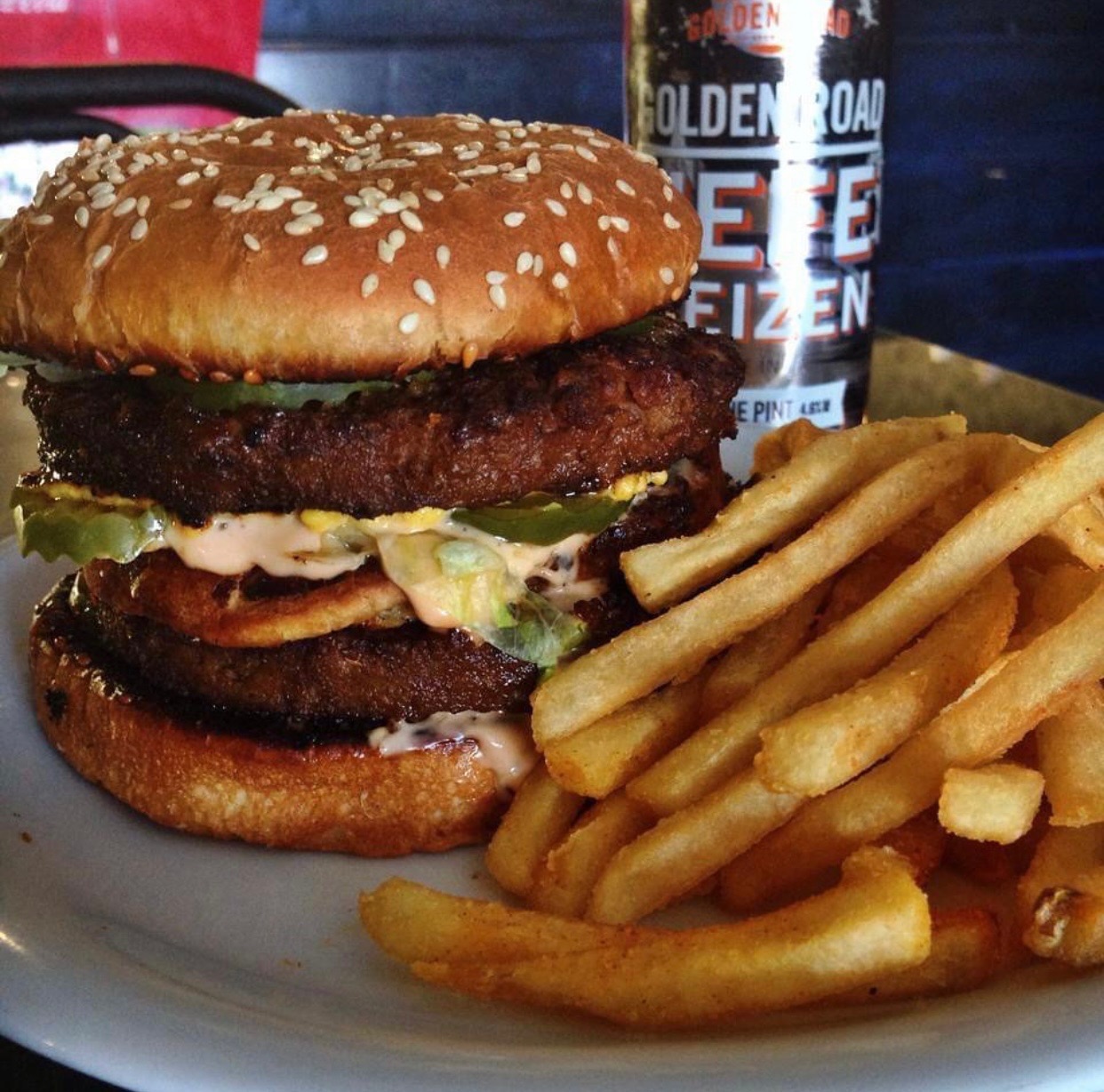 You have to ask for the secret menu to order this Big Mac copycat at LA’s Doomie’s Home Cookin’. Piled high with two vegan patties and three buns—in addition to all the standard Big Mac toppings—one would never guess this burger didn’t come through the drive-thru.
Learn More here 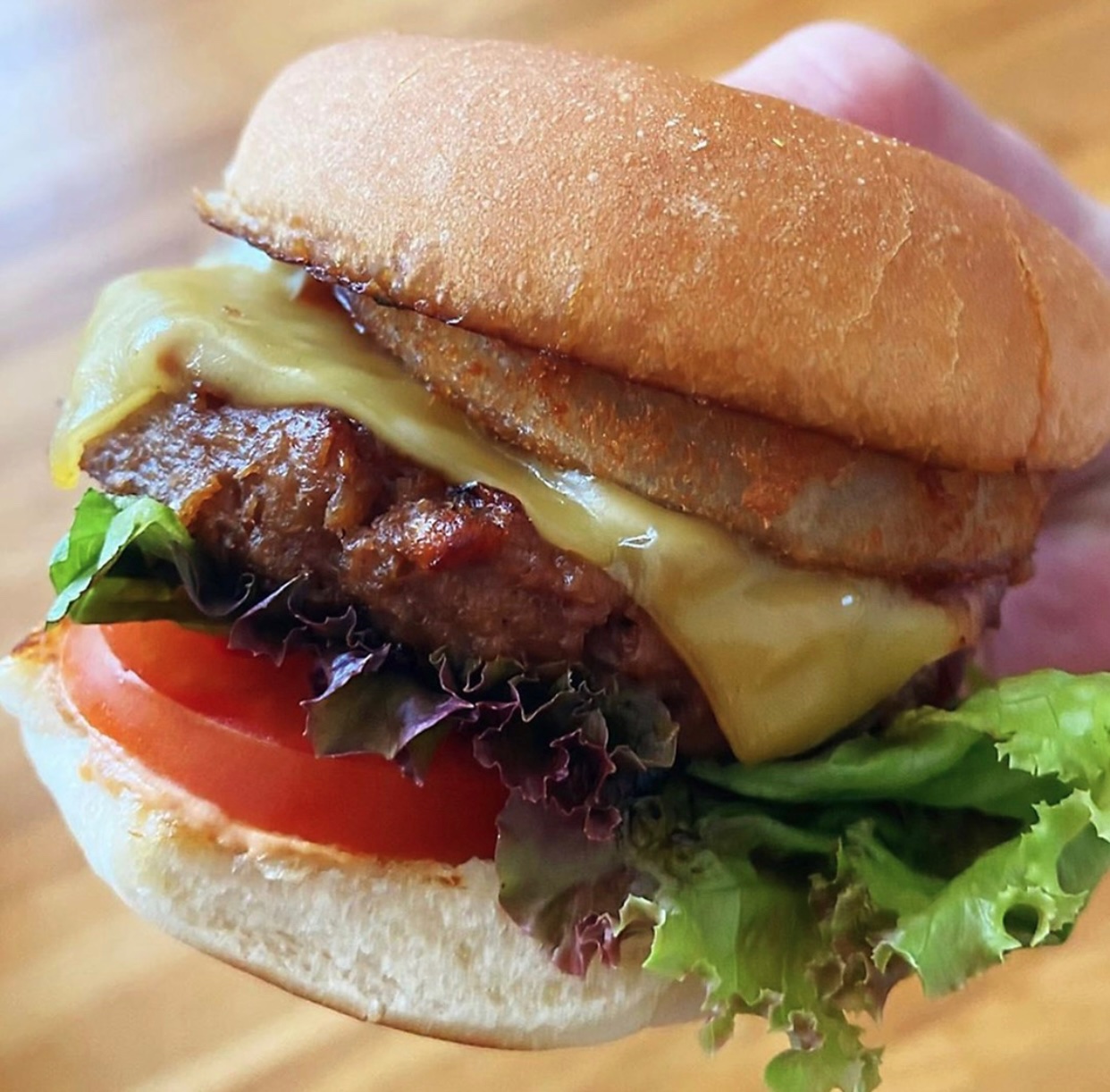 7 The Maverick at Next Level Burger, multiple locations

With locations in California, Oregon, Washington, New York, and Texas, Next Level Burger is redefining fast food one state at a time.

Many of its eleven locations can be found in Whole Foods Markets. Skip the hot bar and head to the Next Level register to order The Maverick. This burger is made with a house-seasoned Beyond patty slathered with special sauce, your choice of vegan cheese, crispy onion rings, tempeh bacon, smoky barbecue sauce, dill pickles, lettuce, and tomato between an organic wheat bun.
Learn More here 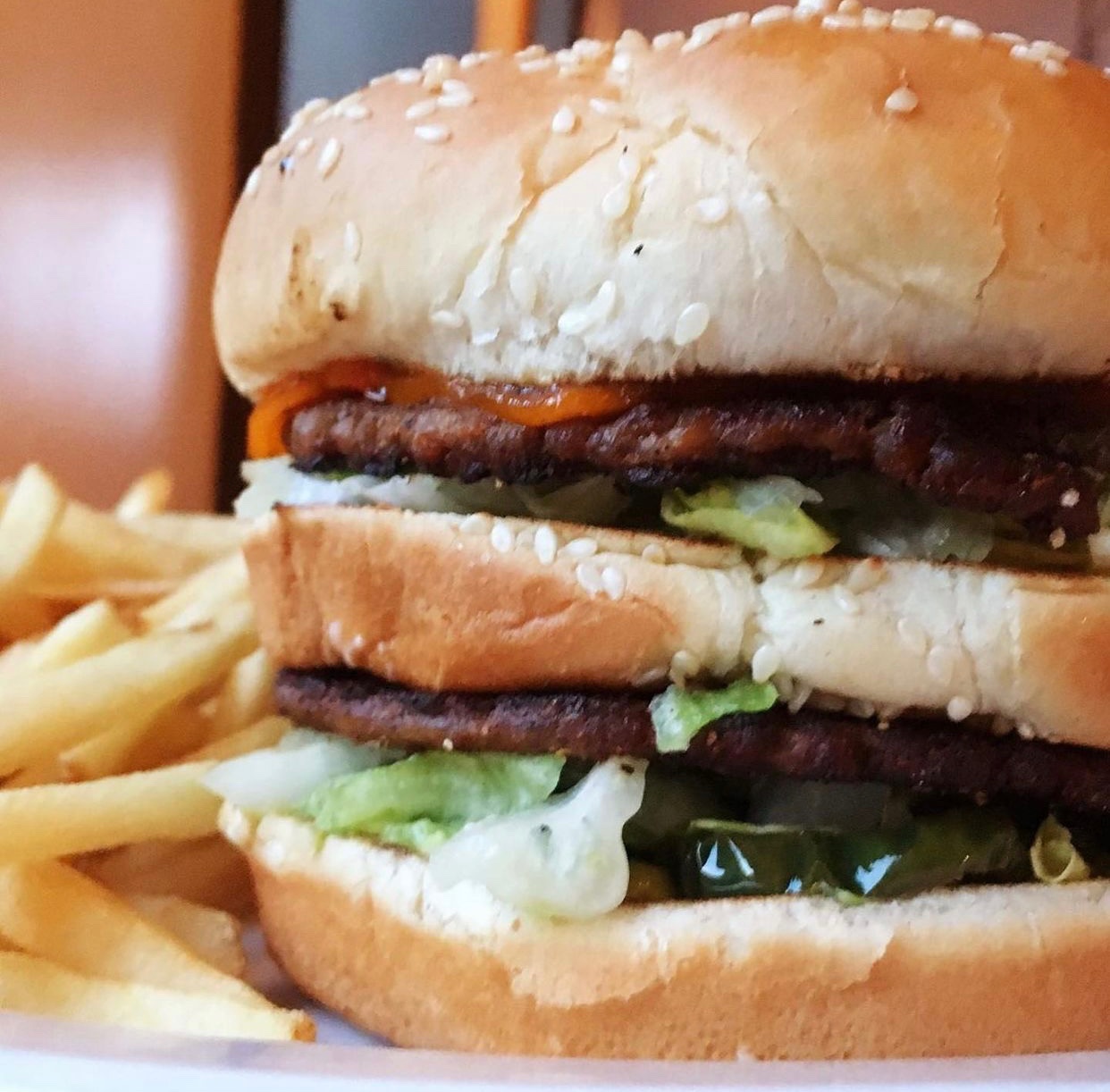 Phoenix’s favorite casual vegan eatery, Green New American Vegetarian, has a burger on its menu to rival all other fast-food contenders—the Big WAC. There’s nothing fancy about it—just a double patty served with special sauce, pickles, cheese, lettuce, and onions on a traditional sesame seed bun—but this sandwich is perfect in its simplicity.
Learn More here 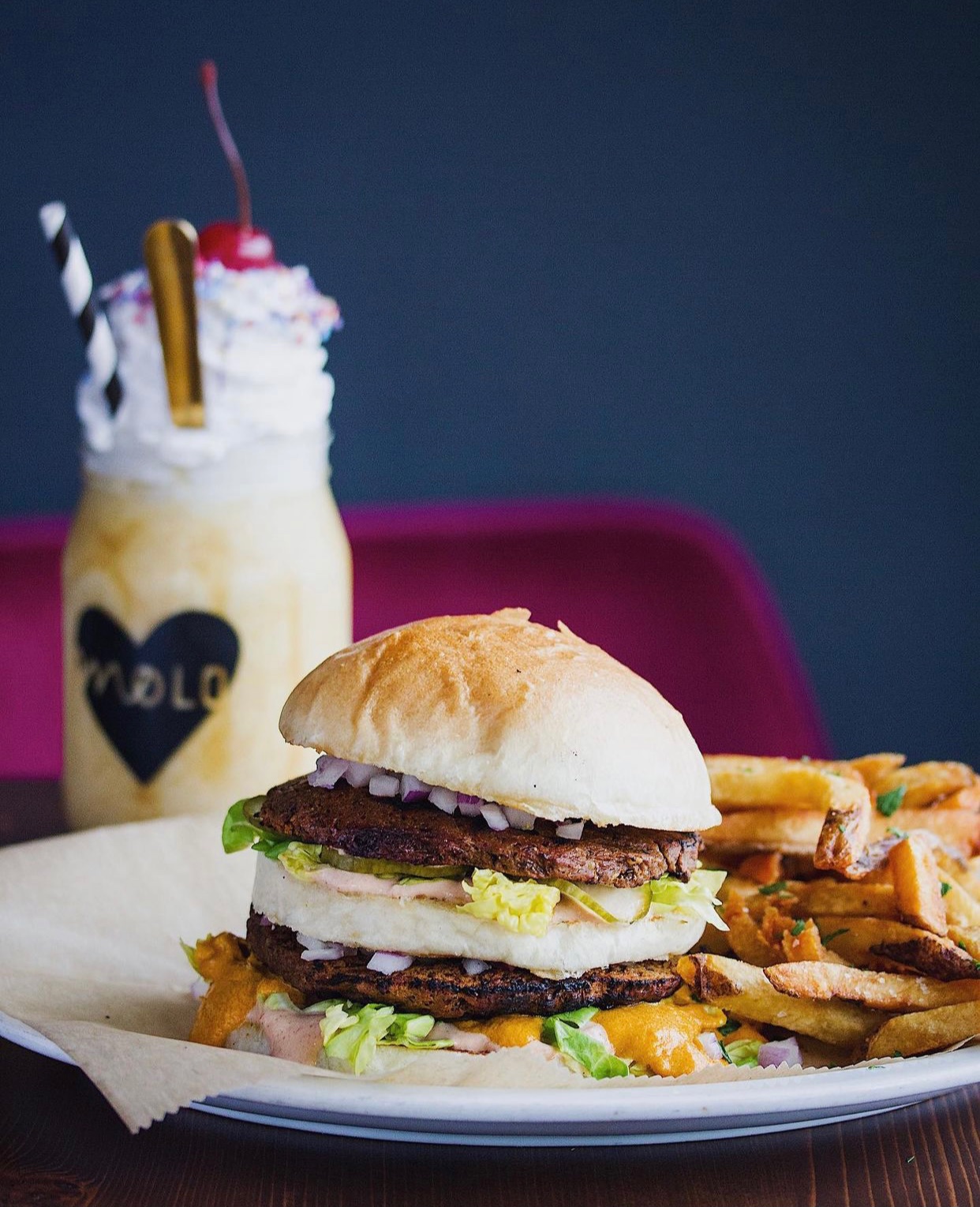 Rest assured, none of the ingredients in the Modern Love Cheeseburger are commercially produced. Bite into this scratch-made bad boy made with a seitan bean patty, cashew cheddar, tomato, lettuce, red onion, pickles, and fancy sauce and you’re on your way to burger bliss.
Learn More here 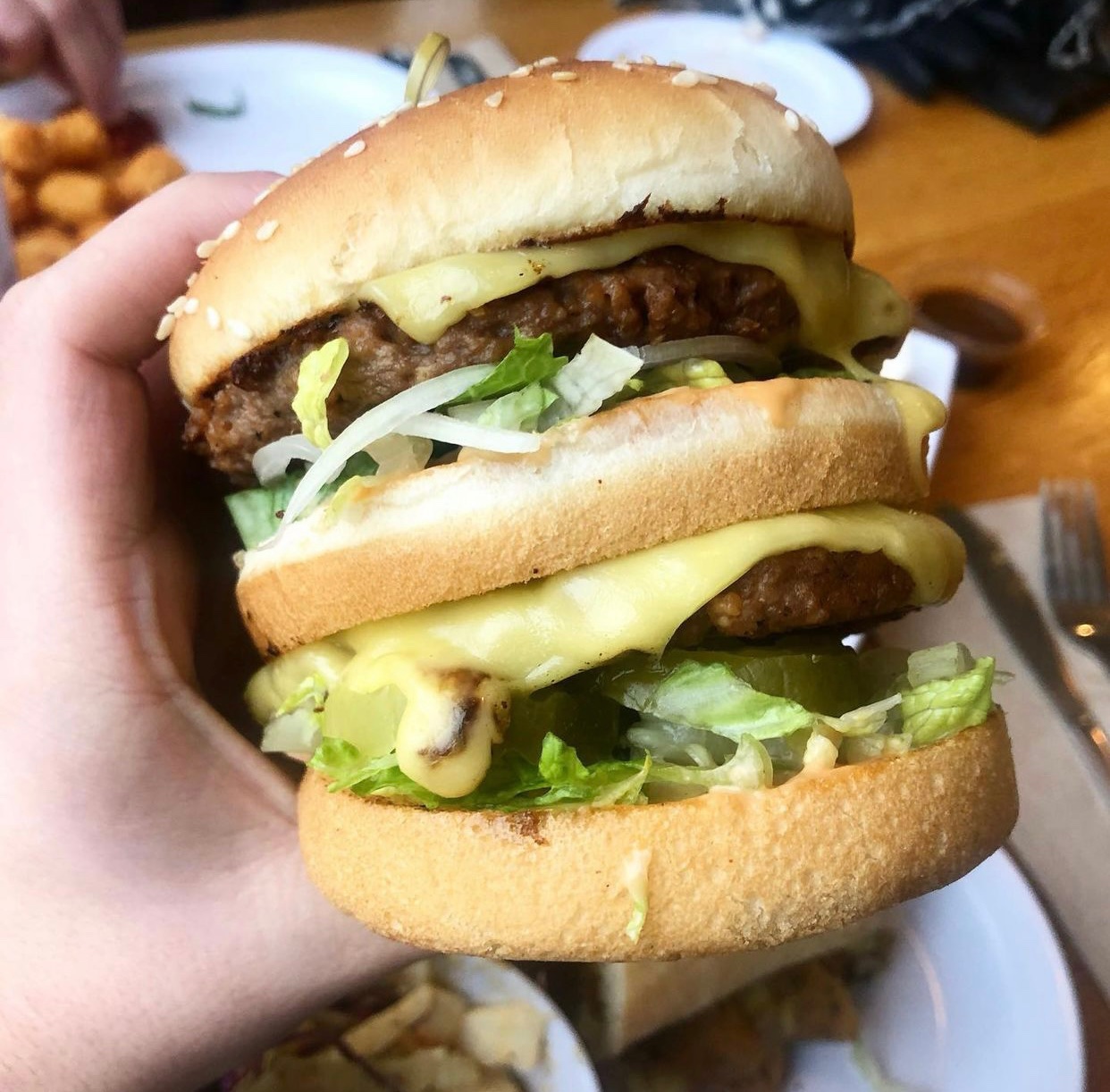 J Selby’s is a solid contributor to Minneapolis’ burgeoning vegan food scene. Known for its plant-based renditions of fast-food, bar, and diner dishes, you can bet the menu includes a stellar Big Mac-style burger. The kitchen relies on two beefy vegan patties to mimic this McDonald’s icon.
Learn More here 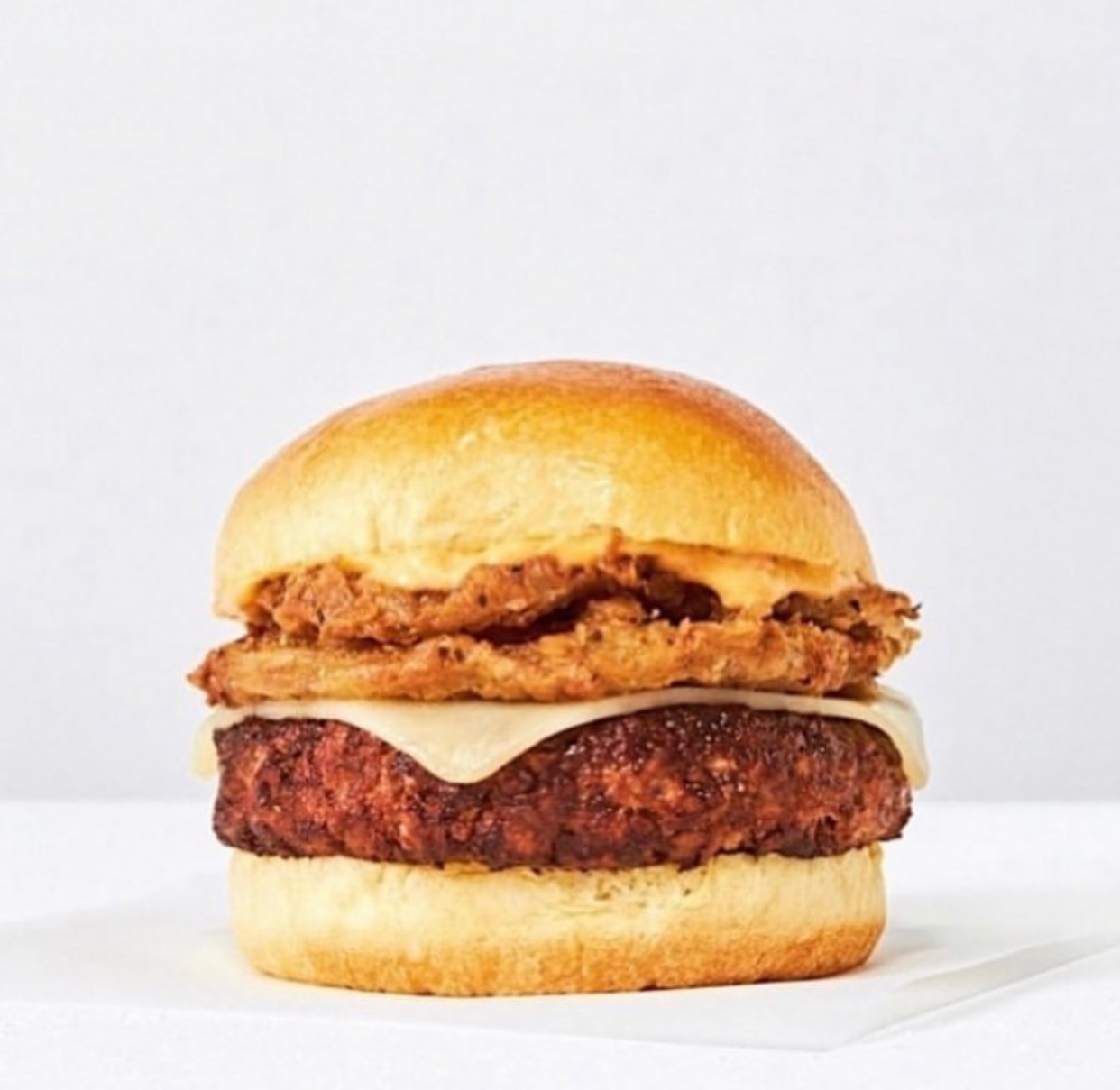 11 Smokehouse Burger at HipCityVeg in Pennsylvania, PA and Washington, DC

You can’t go wrong at HipCityVeg, which now has locations in Philadelphia, New York City, and Washington, DC. The fan-favorite Smokehouse Burger is sure to satisfy even the biggest cravings. Made with a Beyond Meat patty and topped with crispy onions, tangy barbecue sauce, and smoked gouda, pair this veg handheld with sweet potato fries and a chocolate milkshake for a meal you won’t soon forget.
Learn More here 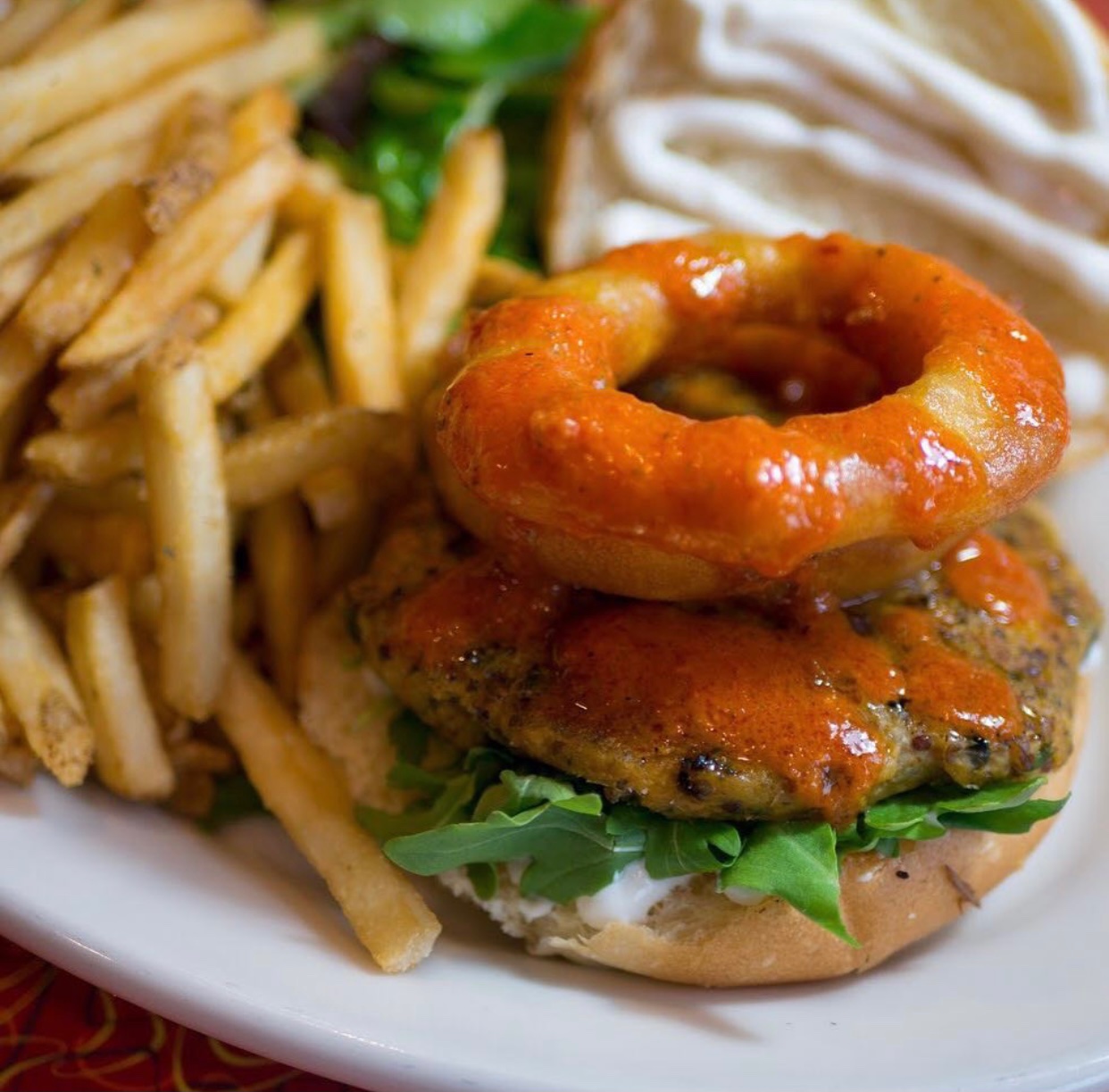 Veggie Galaxy grabbed the attention of Food Network star Guy Fieri and was featured on the popular Diners, Drive-Ins, and Dives primetime show.

While the menu offers several standout burgers to choose from, the one that most resembles the Big Mac is the Kendall Square. Made with a sweet potato and black bean burger, roasted red pepper sauce, onion rings, roasted garlic mayo, and baby arugula, this sandwich beats anything we’ve ordered from a drive-thru window.
Learn More here 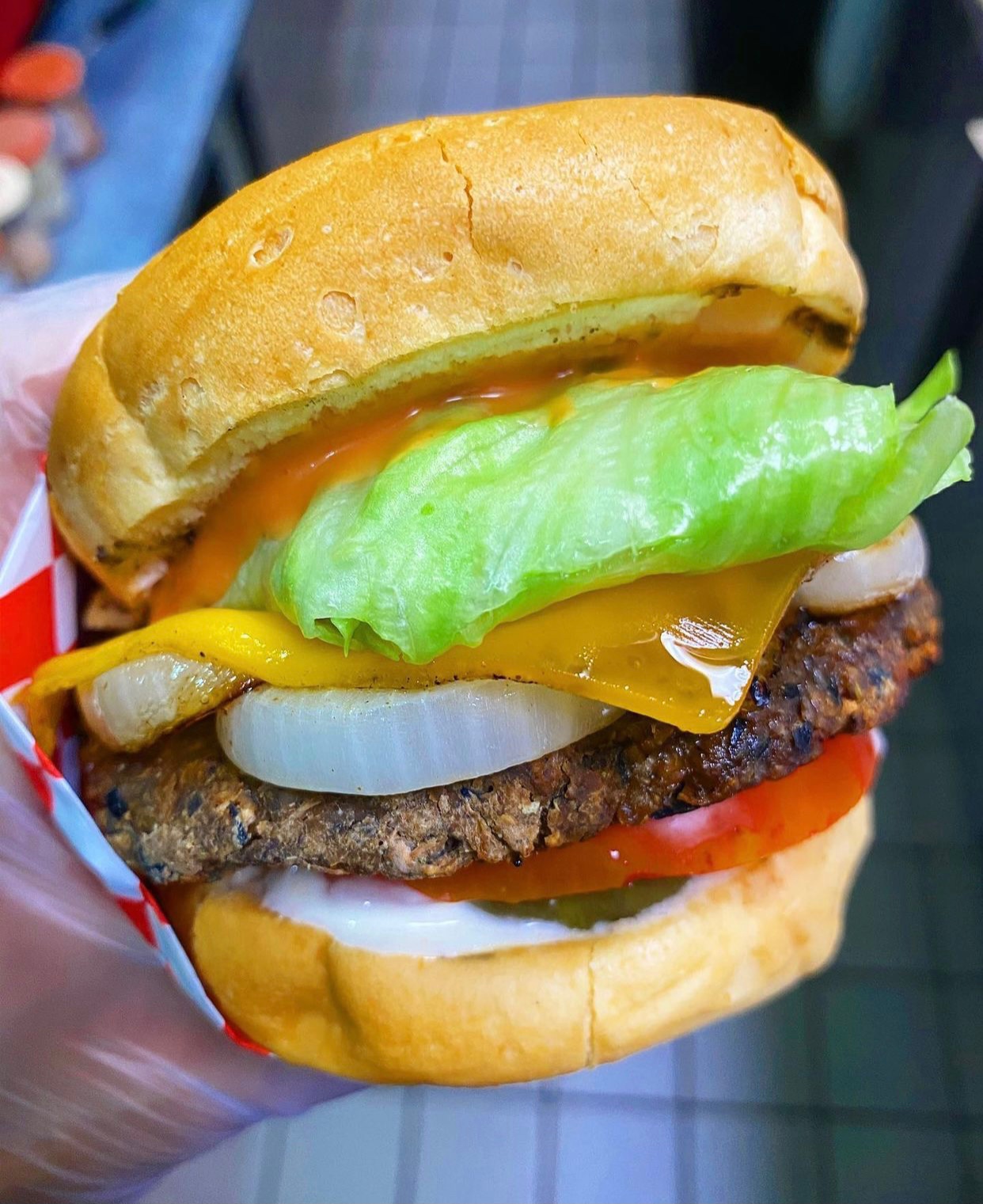 Orange County, CA isn’t necessarily known for its diner culture, but Munchies has recently put the beachside region on the map.

The menu is bursting with over-the-top diner-style indulgences, including the Cheeseburger Delux—a house patty burger coated in melted American cheese and stacked high with lettuce, pickles, onions, G sauce, and tomatoes, all sandwiched between toasted sesame seed buns. If you have room, add a VcFlurry for an added touch of sweet nostalgia.
Learn more here 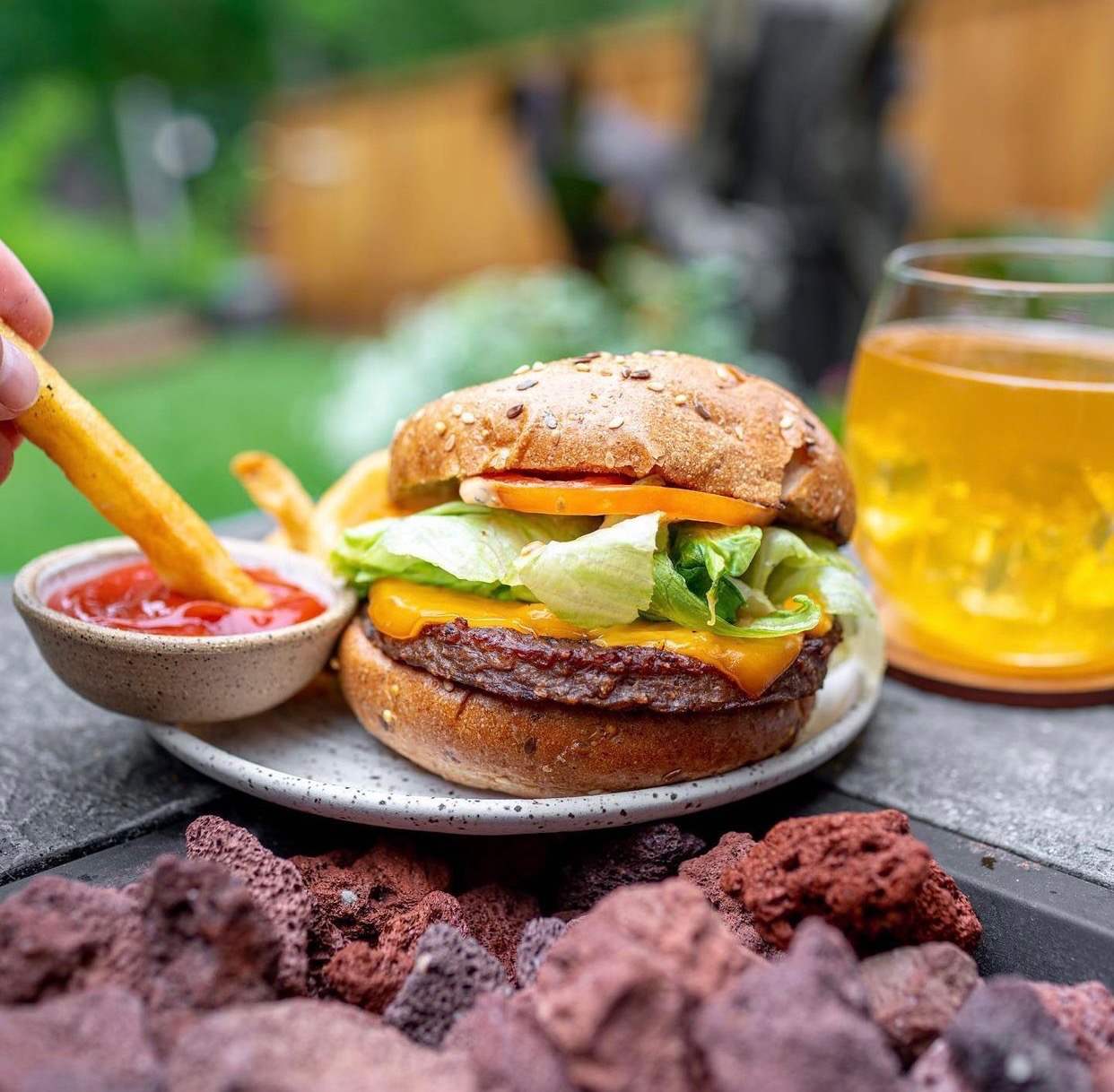 Veg chain and safe haven Veggie Grill has been slinging plant-based favorites since 2006. The simple VG Classic is a can’t miss. Order this Beyond patty topped with lettuce, tomato, American cheese, and special sauce for a Big Mac taste that’s better than the Mickey D’s original.
Learn More here 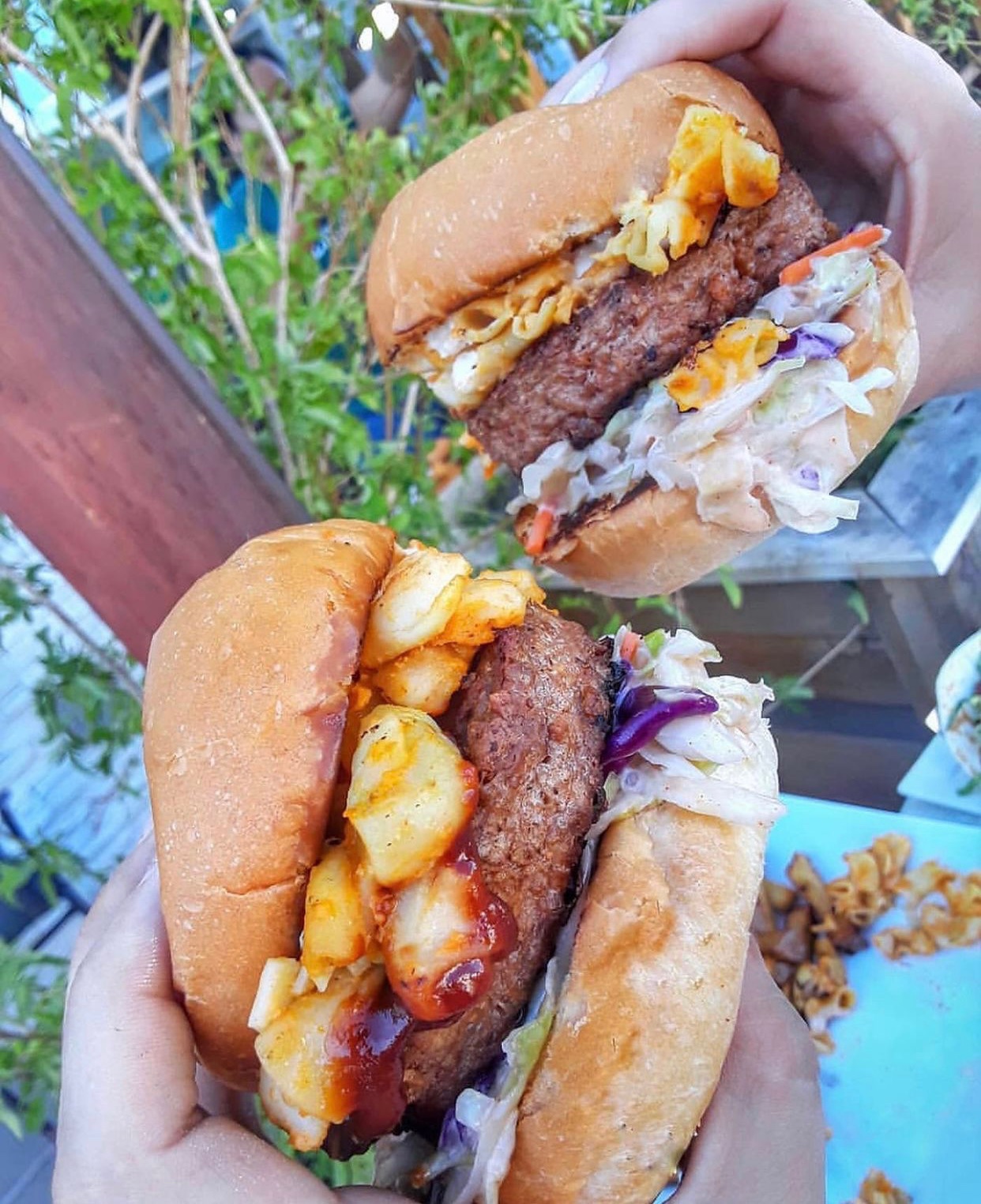 15 The Mac Daddy Burger at Vegenation in Las Vegas, NV

Representative of its hometown, this burger is nothing short of “extra.” Vegenation’s southern spin on the Big Mac features a vegan patty topped with mac and cheese, collard greens, barbecue sauce, cole slaw, and secret burger sauce. It comes with fries, but the loaded sweet potato tots should not be ignored.
Learn More here 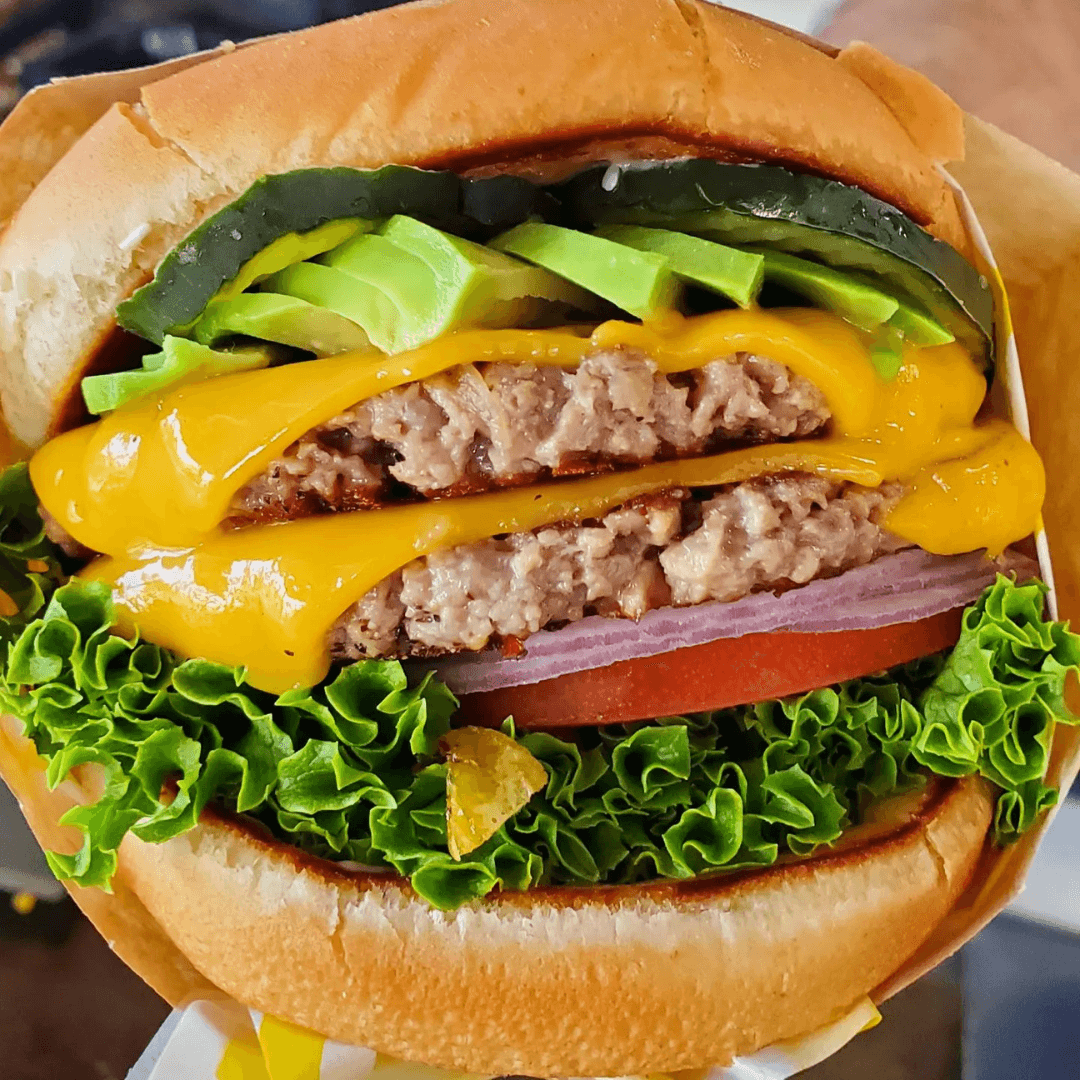 This vegan fast-food chain is giving Mickey D’s a run for its money. In this signature burger, a beefy vegan patty is topped with secret burger sauce, American cheese, lettuce, grilled onions, and pickles for an epic handheld that’ll have you saying, “Big Mac, who?!” Complete your order with a creamy milkshake, and you’ve got yourself an unparalleled burger experience.
LEARN More here 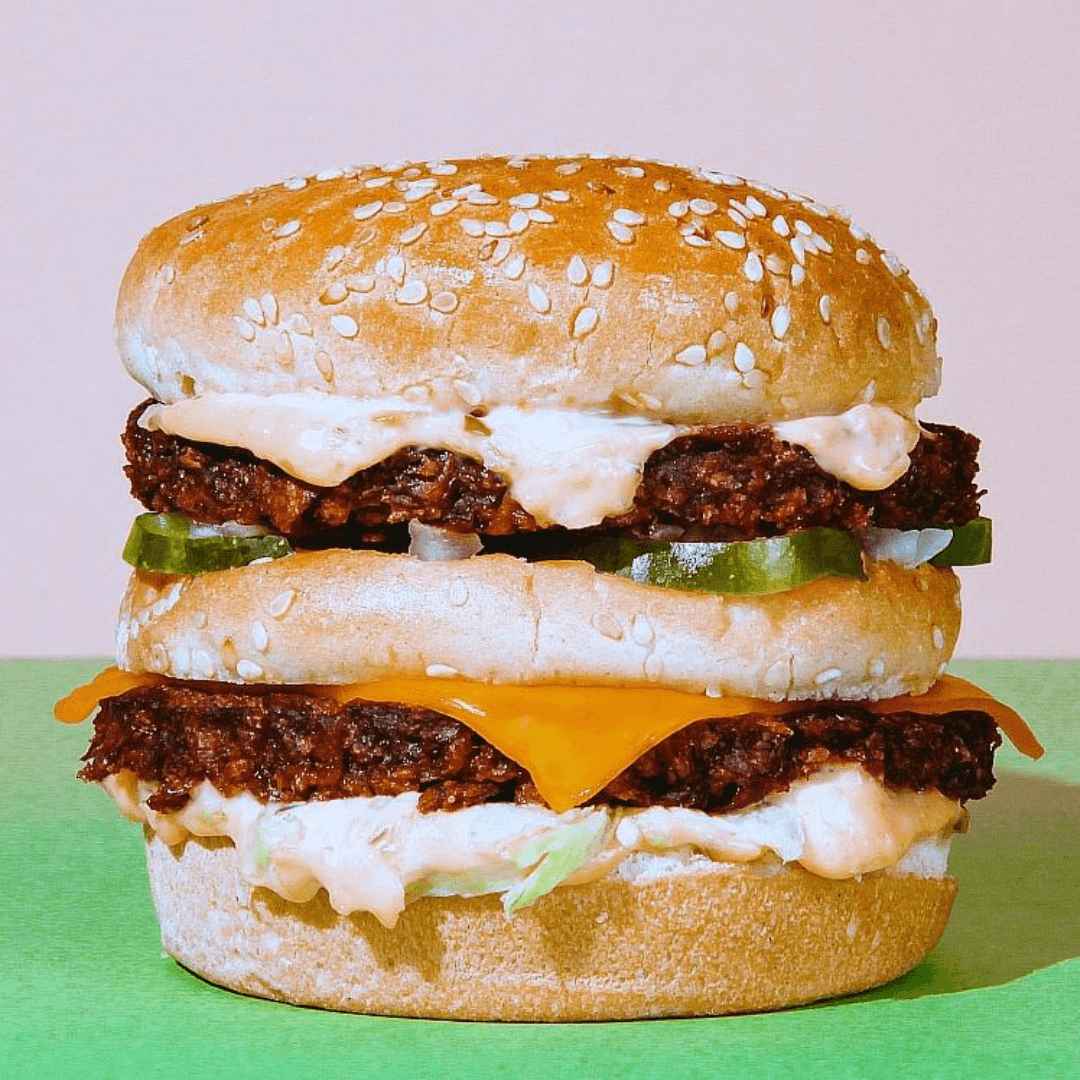 17 The Queen Bee at Honeybee in Los Angeles, CA

This quickly expanding plant-based burger chain does the classics right. Made with the customer’s choice of Beyond or Impossible beef, this double-stacked handhold comes with double meat, double cheese, and just the right ratio of lettuce, tomato, thinly sliced onions, pickles, and housemade onion jam. You’ll need to really squish down the sesame seed bun to fit this sandwich into your mouth.
Learn more here

This list is by no means exhaustive. Vegan restaurants all across the country are masters of making plant-based versions of fast-food classics like the Big Mac. As always, we encourage you to get out there and support your local vegan restaurants so they can keep on feeding the community.